What Are Pitt Quarterback Kenny Pickett’s Odds of Winning the Heisman Trophy?

Kenny Pickett is “a safe bet to at least be a finalist,” according to Sporting News. Fans will have a say in the selection. 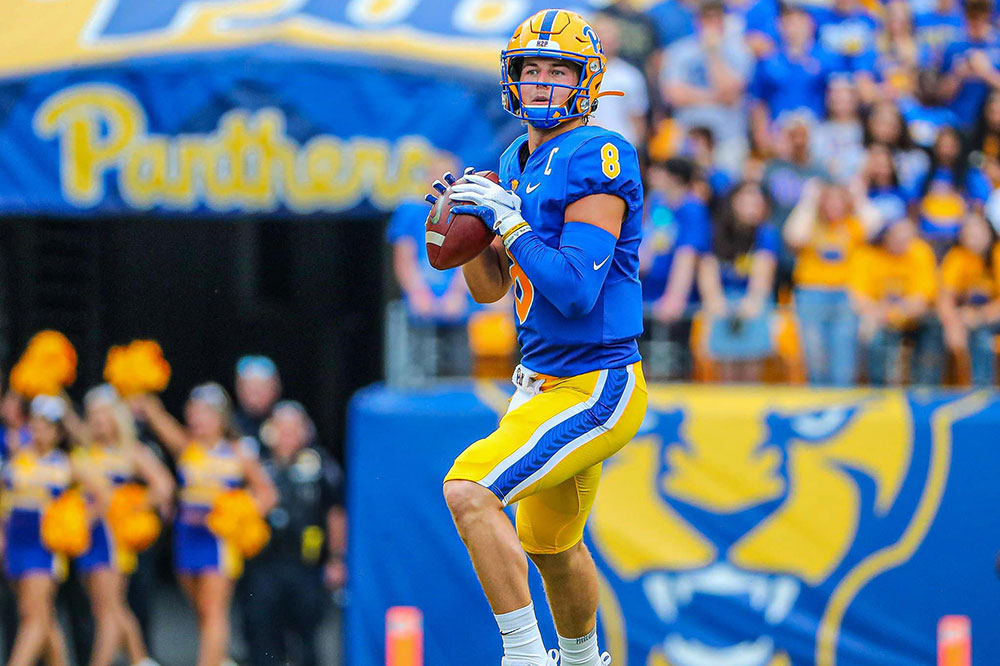 The most prestigious award in college football may go to a local player — the first time in 45 years.

Fifth-year senior quarterback Kenny Pickett has broken nearly every Pitt passing record. During Saturday’s win over Syracuse, he set a new school record in touchdown passes at 40, passing Dan Marino’s mark of 37 for the most in a season.

Pickett’s stats, coupled with Pitt’s 10-win season, have earned him a spot on the 2021 Heisman  Trophy ballot.

The Heisman trophy is named after John William Heisman, a Titusville, Pa., native who would go on to have a successful coaching career with Georgia Tech from 1904 to 1919, where his Golden Tornadoes became a scoring powerhouse with 33 straight wins.

The process for selecting a winner and the four finalists, who will all receive an invitation to New York, is multifaceted and complex.

According to the Heisman website, sports journalists comprise most of the electors, with sectional representatives from the Far West, Southwest, South, Midwest, Mid-Atlantic and Northeast regions.

This year’s sectional representatives are Dave Campbell from the Waco-Tribune Herald in Texas, Philadelphia’s Dick Weiss from Blue Star Media/NY Daily News, Don Criqui from CBS Sports in New York, Bob Hammel of The Herald Times in Indiana and ESPN’s Lee Corso from Florida. These sectional representatives are responsible for selecting state representatives, who select voters within their particular state. The amount of votes that a particular state is allotted depends on the size of the state and the number of media outlets it has.

Each section within the country has 145 media votes, totaling 870 media votes across the U.S. Additionally every former Heisman winner, 57 as of this year, has a vote as well.

In 1999, The Heisman Trophy implemented a program that allows the public to become part of the balloting process by permitting one fan vote eligible in the overall calculation of scores. This program once again continued this past season through a partnership with Nissan North America, bringing the total number of voters for the 2021 Heisman race to 928.

The last University of Pittsburgh player to win the award was Tony Dorsett in 1976 as college football’s all-time leading rusher with 6,082 yards. Dorsett would go on to play professionally in the NFL for the Dallas Cowboys and Denver Broncos before his retirement in 1988.

Earlier this week, The Atlantic wrote that Bryce Young is the current favorite to win the Heisman following a game-tying 97-yard touchdown drive in the final minute of Alabama’s Saturday win over Auburn. Young has been neck-and-neck with C.J. Stroud throughout the selection process, with Pickett ranking third on BetMGM’s list of the top eight Heisman candidates. FanDuel ranks Pickett fourth after Young, Stroud and Matt Corral, and Sporting News says he’s “a safe bet to at least be a finalist.”

But as Heisman voting enters the final stretch, Pickett could still grab some 11th-hour votes by leading Pitt past Wake Forest, the winner of the ACC Atlantic Division, in the conference title game on Dec. 4.