An elaborate waterfall and pool in Wexford make a splash every day of the year. 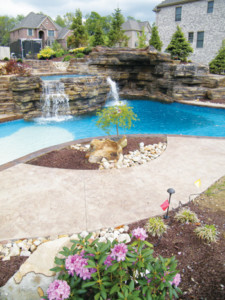 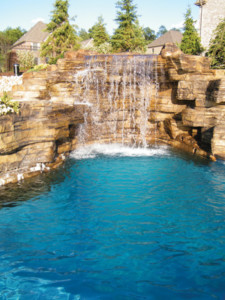 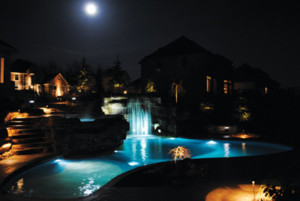 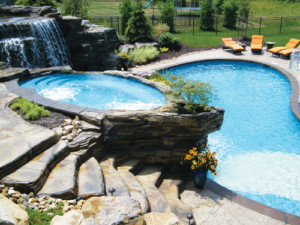 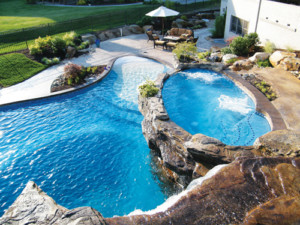 Few homeowners attempt to take on a project as elaborate as Aaron and Lauren Salko’s. Their sloping backyard in Wexford, once a simple expanse of green grass, is now home to a spectacular waterfall and pool.

The details read like an ad for a Caribbean resort: A wading pool that comfortably seats six rests at the top of the structure. That elevated pool feeds into a waterfall that drops down 12 feet, flowing past a 10-person hot tub with jets. The waterfall lands in the huge main swimming pool. And behind the waterfall, seating is built into the walls to create a relaxing, private space.

Although the entire structure is made from expertly carved cement, that cement was stained with a variety of acids to create eight different shades of gray, simulating natural rock. At one end of the pool, marble plaster was used to create a beach-style entry.

Saltwater fills the pools, and a faux-rock deck surrounds the entire structure. A cement bar was built around a window at the back of the Salkos’ house, so drinks can be served through the window of their indoor bar to the outdoor pool bar.
As you might have guessed, construction wasn’t easy: The project took more than two years of effort and cost a considerable amount of money. But the Salkos are more than satisfied with the final product and are still somewhat amazed that they’ve created something so stunning.

It really does feel like a resort, Aaron says. He adds that when he and Lauren show photos of the pool to friends, they’re asked which retreat they visited.

Despite Pittsburgh’s climate, the Salkos use their yard year-round. Even on cold winter nights, they sit in the hot tub, which can run even after the pool is closed for the season.

How They Did It

The project began during fall 2008. “We searched for almost a year to try to find somebody in this area—or even in the state—that could actually do what we were looking to do,” Aaron says.

Several contractors told the couple “You can’t do this, you can’t do that,” Lauren says. But when they met Tom Blodgett, of World Class Pools, they got a different response. “He took the image that was in our heads,” she says, and built it exactly.

Blodgett worked closely with the natural shape of their property, so the end result seems organic even though it’s entirely man-made. He covered the future pool area with a huge work tent so that he could work year-round. “During the nighttime, he’d be out there welding,” Aaron says, “and there’d be an explosion of fireworks inside the tent.”

The primary work was finished in May 2010, but one final project remains for this summer: completing the custom-carved “fire dining table.” Now complete and working, it looks like a huge tree stump with a free-form gas fire pit in the middle, Aaron says. It’s perfect for outdoor dining in summer and will serve as an outdoor fireplace during colder months.

The couple’s daughter, who’s almost 2 years old, adores the pool, and they’re already envisioning that she and her friends will spend their summers swimming. Friends and family visit often, and summer getaways now happen right in the Salkos’ backyard.

“I’m from New Jersey, and I miss the beach and the ocean and the Jersey shore,” Lauren says. “I joke around with my husband that this is his way of keeping me here all summer long. Now that we have this, there’s no reason to leave!”

This article appears in the June 2011 issue of Pittsburgh Magazine.