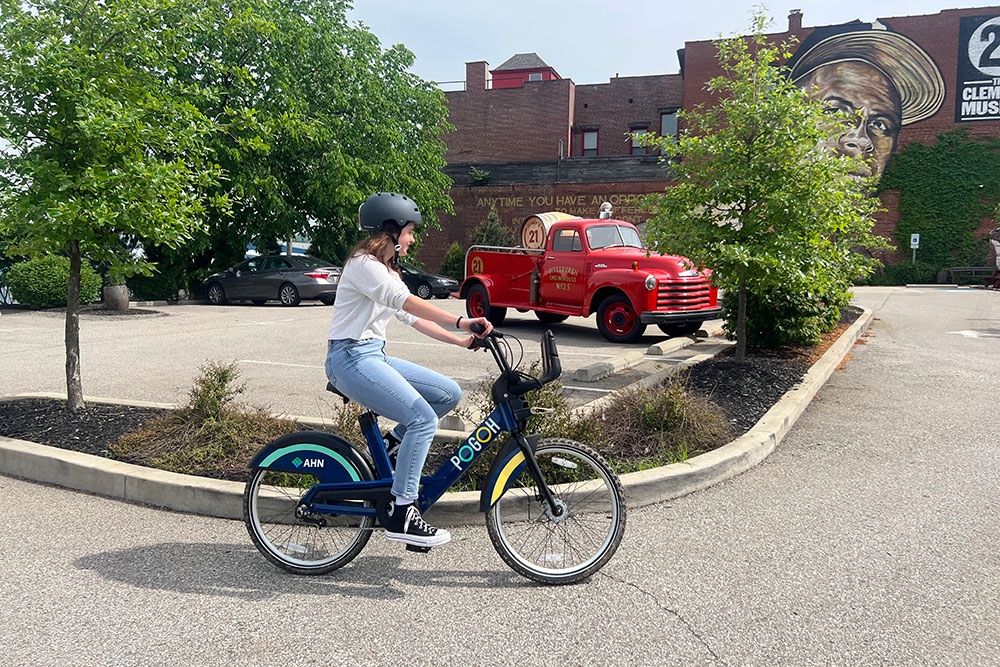 POGOH has arrived in Pittsburgh — providing the city with its newest ride-share program that offers 172 pedal bikes and 173 electric-assist bikes docked at 38 stations scattered throughout the neighborhoods.

The program, which officially launched on May 6, replaces the former bike-sharing program, Healthy Ride, with new equipment and branding.

For the first time, the fleet includes electric or e-assist bikes, which have an electric motor to help riders climb Pittsburgh’s notorious hills and get started after stopping, but they still require riders to pedal. 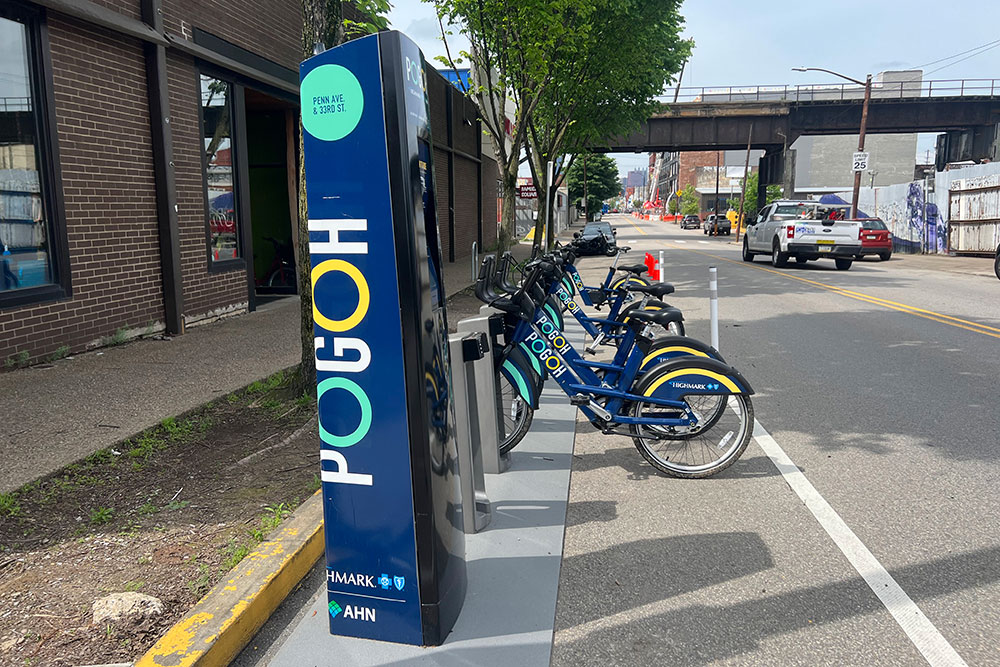 Erin Potts, director of marketing and community outreach, said this variety of options exemplifies the company’s core values of inclusivity.  “More people can utilize bike-share if they have that electric-assist option, whether it be that they don’t want to sweat on their work commute or they just need a little bit of a boost to help them get back into physical activity or if they are going to encounter a big hill during their ride. It just makes it more accessible to more people and for more purposes.”

This also gives commuters more ways to get around the city at a time when gas prices are skyrocketing.

I wanted to see how the system works. So I downloaded an app called PBSC , ventured to the station on Penn Avenue and 33rd Street in the Strip District and began my bike riding adventure. Using the app, I unlocked a pedal bike with a QR code located below the handlebars.

Riders can also use a 5-digit code or a POGOH membership to unlock a bike. The keypad for the code is located to the left of the bike on the dock. The membership card pad is on the right and requires riders to tap their physical POGOH card. 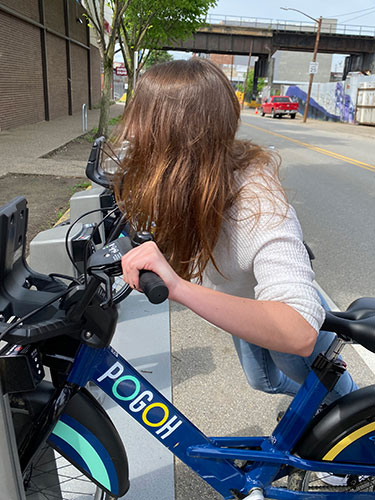 The dock’s light turns green and my bike is unlocked, ready for me to ride. I pull on the handlebars — no budge. After several attempts to dislodge my bike, I yank it really hard — finally free. Users may need some muscles to retrieve the bike, and also should not be afraid of breaking the bike from tugging so hard.

While I was getting started, an employee from the company’s main shop rode across the street to a parking lot to test out a bike — assuring its safety for rental riders. Following his lead, I brought my bike over to take it for a spin. The worker gave me a warm welcome and provided some tips on how to ride it: sit up straight and look ahead.

Riders can report broken bikes at the station docks after returning them. This takes the bike out of circulation and notifies the company to come and fix it.

“We do see every bike back in the shop about once a month just to do some basic safety checks,” Potts says. “We employ a full mechanic staff who is constantly maintaining the fleet that we have because you have got to keep those bikes ready for people.”

The ride was smooth as I rode around the parking lot a few times. I easily adjusted the seat to my height, popped the kickstand up with no issues and took off. The brakes, located on the handlebars for both wheels, worked fine with no squeaking; the gear shift on the right changed smoothly among the three options; the tires spun evenly without any bumps or flats; and the bell, located on the left, worked perfectly.

Once my adventure finished, I returned to the station to dock my bike. To return the rental, riders must slide the bike into an available dock and wait for the green light to confirm it is locked. Similar to getting the bike out, I had to use some elbow grease to shove it back in.

POGOH was created specifically for Pittsburgh, Potts says, focusing on how to help the community through bike riding. The company will offer community bike rides all summer to explore the city and get active.

“We’re really all about low barrier, trying to get people out, get active in a way that doesn’t require extreme physical fitness or a whole lot of time — just fun community-based rides,” Potts says. “A lot of them are around different neighborhoods and exploring different cultures and exploring different art around the city, so they often each have their own theme and offer a cool view of the communities within our city.” 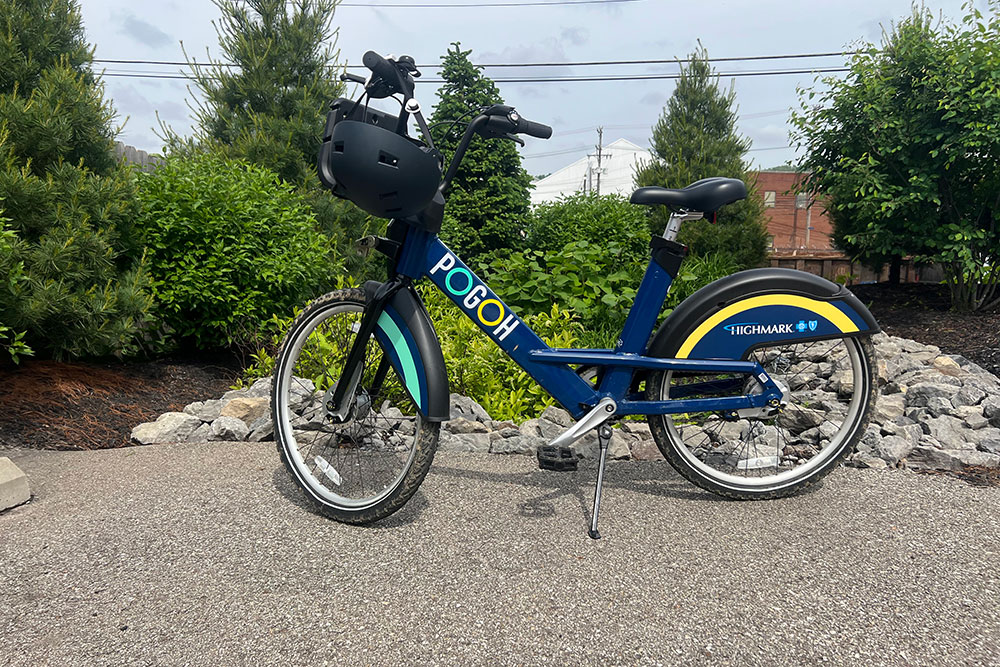 Potts also says the new name represents Pittsburgh because their company wants to be community-driven.

In the future, POGOH plans to expand its company. Potts says Pittsburgh needs more bike-sharing stations available to everyone.

“We still have another 20 some stations that are going to be coming this year. It’s going to take us a while to grow back up where we were before, but we’re not even going to stop there,” Potts says. “Pittsburgh needs 300 bike-share stations in the city alone and so we have a long road ahead, we will keep adding more stations, more bikes, more places, e-assist bikes make hilltop communities way more accessible with the program.”