Don't head to the parking lot without this essential checklist. 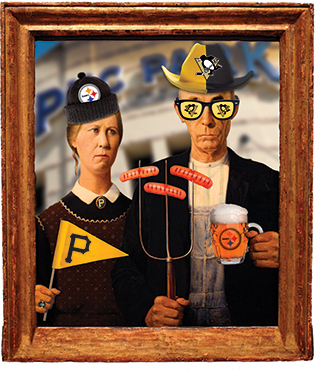 Here in Pittsburgh, tailgating has been elevated to an art form. We love our teams, we love good food and drink, and we love gathering for some serious revelry. We’re also a practical bunch: Pregame tailgating is the perfect way to offset the staggering cost of NFL ticket prices.

Who wouldn’t want to extend a pricey three-hour experience into a celebratory eight-hour one?

Some fans spend hours each week shopping for tailgating groceries and supplies, coordinating the contributions of friends, and packing their trucks and cars with tables, hot plates and tents. There’s something about the effort and preparation that serious tailgating requires that meshes perfectly with Pittsburgh’s “If it’s hard to do, let us give it a shot” sensibility.

At Heinz Field, the parking lot spots are pre-sold, so the same families tend to come each week. Seeing the same people regularly means there are reputations to uphold, and that adds to the neighborly vibe found at a Pittsburgh tailgate session.

Tailgaters don’t leave all the fun to the athletes. Many of them bring along games of their own and stage epic competitions on the asphalt. They play:

★ Cornhole ★
Players score points by tossing beanbags (often filled with dried corn) into a hole in a large, rectangular wooden box that’s propped up at an angle. This is by far the most popular game at Steelers tailgates and at tailgates nationwide.

★ Washers ★
Same principle as Cornhole – though the board is generally square, often carpeted and a bit smaller. Players toss small metal washers, aiming to have them land in a specific spot. Tailgatewashers.com offers boards, accessories and even a battery-powered light for nighttime play!

★ Ladder Ball/Bolo Toss ★
Two weighted objects (often golf balls) are attached by a string to form a bolo, which is tossed toward a metal frame resembling a ladder. Each of the three rungs on the ladder has a different point value, so players aim to have their bolo wrap around one of these rungs.

★ Football/Frisbee ★
These are natural choices for pre-game entertainment, and you will see tailgaters tossing these items around. But with so many people crowded together in a parking lot, it’s tough to keep a projectile from landing in the middle of someone else’s party.

Don’t head to the parking lot without these essentials:

We looked around the globe for the best far-flung points of Steelers pride.

This article appears in the August 2012 issue of Pittsburgh Magazine.
Categories: Sports