Plus, chef talk with Verde's Lynette Bushey and a great Greek takeout spot in Lawrenceville. 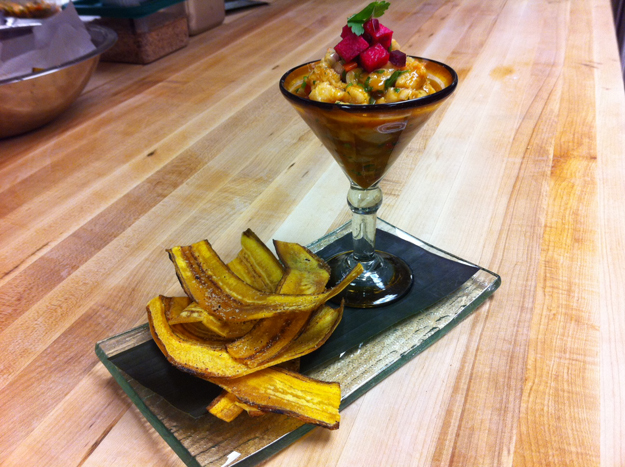 Ceviche at Verde in Garfield. Photo by Jeff Catalina.

Trader Joe's brings another store to Pittsburgh
Last week, the city gained a second location of this unique grocery store. The quirky chain’s first Pittsburgh shop opened in 2006 in East Liberty (after a letter-writing campaign from locals, no less), and it is loved for its creative gourmet products and affordable pricing. The new location is about 12,000 square feet and delivers the store’s trademark Hawaiian-inspired décor along with locally themed murals that pay homage to iconic landmarks, like Kennywood and the Fort Pitt Bridge. It’s a great place to shop for the holidays, when entertaining is on the menu: Everything from creamy goat-cheese medallions encrusted with roasted pistachios to treats like eggnog and peppermint bark are in store for the holidays.

Experienced cook at helm of Verde's kitchen
It’s hard not to notice Pittsburgh’s newest Mexican restaurant; in fact, it’s next to impossible. The aptly named Verde is nestled in the first floor of Garfield’s neon-green Glass Lofts and, like it’s unique location, this upscale Mexican establishment boasts a chef with the experience to match.  “I want to take a little bit of everything I’ve learned and put that into the menu at Verde,” says chef Lynette “LBEE” Bushey, a Pittsburgher who’s fluent in Spanish. “My motto is that less is more. You only need a few quality ingredients.”  Bushey, a self-taught chef, seems to have no shortage of inspiration to draw from. She got her start in Ohio preparing Tex-Mex grub, a far cry from the much more authentic fare she’ll be serving to Verde customers.  She also has kitchen experiences across the U.S., including time in well-known West Coast eateries, such as The Two Hot Tamales and the Border Grill. Bushey has also spent time working in Costa Rica and Spain and, most recently, she worked in the kitchen at a resort in Nicaragua for eight years.

“[Owner Jeff Catalina and I] want to set ourselves apart from other Latin restaurants in the city,” says Bushey. “I like the [local] restaurant scene and how it’s growing. We want to set the bar in the East End.”  Her menu, focused on offering authentic cuisine while using minimal ingredients, will include an assortment of familiar fare—such as tacos, taquitos, enchiladas and tamales—made from traditional recipes. One of the highlights of the menu is the quinoa corn shrimp fritters, which Bushey calls, “little deep-fried balls of goodness.

In addition to the regular menu, Verde will also feature daily specials. And while restaurant’s goal is to remain authentic, the menu has been adapted for more modern dietary needs: For example, Bushey’s recipes use vegetarian black beans instead of the more common refried beans, and there are roughly 10 to 12 vegan dishes on the regular menu. “There are options for everyone,” says Bushey. “We want to get Pittsburghers out of the chain mindset and make Verde a destination Mexican restaurant.”

Namesake dish at Lawrenceville eatery is top-notch
When considering Greek takeout options, Pastitsio might not instantly come to mind. Sure, the eatery is located on busy Butler Street, but its unassuming exterior easily causes it to fall under the radar. Regardless, Eat Street was intrigued enough to check it out.

After sampling several classic Greek dishes, it was evident that the namesake offering was the best of the bunch. The pastitsio was comprised of the three traditional (piping-hot) layers: soft penne pasta, simply seasoned ground beef and a creamy, perfect béchamel sauce. It's available in single- and double-slice servings; if you intend to order a side and dessert, you should be fine with the single portion—unless, of course, you've got a hearty appetite.

This article appears in the November 2011 issue of Eat Street.
Categories: PGHeats