This Week in Pittsburgh History: Attack on Pearl Harbor Hits Home and Ends a Movement

The news of the attack came just as an America First rally was slated to begin at Soldiers & Sailors Memorial Hall. 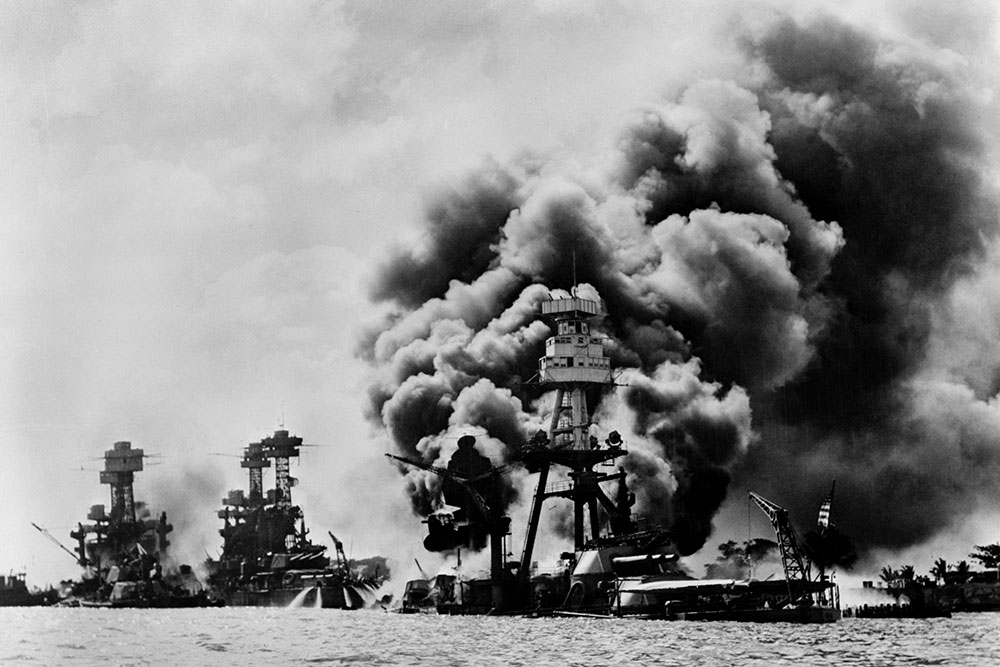 Dec. 7, 1941 would go down in history as one of the pivotal moments of World War II. But it began as just an ordinary Sunday in Pittsburgh, with a gathering of the anti-war, anti-Roosevelt “America Firsters” at Soldiers & Sailors Memorial Hall in Oakland.

The rally was sponsored by the America First Committee, an isolationist pressure group that hoped to discourage support for America’s involvement in the war already raging in Europe. It had garnered the attention of some 2,500 Pittsburghers, but just minutes before the meeting was scheduled to begin, a journalist informed organizers that Japan had attacked Hawaii and the Philippines.

In that moment, the world changed, and the Pacific War was born. But America First organizers, steadfast in their mission to keep the United States out of the war and discourage aid to Britain in its fight against Hitler, dismissed the news as a hoax. The meeting proceeded uninhibited.

Enrique Urrutia, a colonel who lived in Oakland and arrived at the rally in civilian clothes, had heard radio reports from Pearl Harbor. Knowing that the news was not, in fact, a hoax, he stood up and shouted, “I wonder if the audience knows that Japan has attacked us and that Manila and Pearl Harbor have been bombed.”

But his words were largely silenced by the America Firsters near him, who perhaps mistook him for a run-of-the-mill heckler and yelled, “Throw him out!” Even before the colonel finished, the ruckus clamored through the hall.

Police escorted Urrutia to the lobby, where he called the gathering “a traitors’ meeting.” From the dais, draped with a “no-war” banner, speakers dismissed Urrutia as an interventionist.

“Don’t be too hard on this bombastic man,” Sipe quipped. “He is only a mouthpiece for Franklin Delano Roosevelt — only another springboard for the warmongers.”

But try as they may to dismiss the word of Pearl Harbor as “fake news,” the America First Committee — and the rest of the world — would wake up Monday morning to headlines relaying a declaration of war.

In the Post-Gazette, the Dec. 8 edition provided a bold headline atop the front page and 10 stories about the attacks, Roosevelt’s plans, movements of Japanese troops, the sinking of a Japanese carrier and the reaction of war opponent Charles Lindbergh, which was titled, “Lindbergh Has Nothing to Say.”

Another headline on the front page read, “Heavy Loss Reported To Army and Navy In Attack On Hawaii,” and in the local section, it was reported that military recruiting offices were set for a rush.

The event at Soldiers & Sailors was covered in great detail, too. The newspaper reported on Urrutia’s interruption and said that after the colonel was escorted out, North Dakota Sen. Gerald Nye took to the podium for his address. When a reporter handed him a note saying that Japan had declared war on the U.S., Nye spoke for another 15 minutes before the journalist’s message sunk in.

“I have before me the worst news that I have encountered in the last 20 years,” he told the audience. “I don’t know exactly how to report it to you, but I will report it just as a newspaperman reported it to me.”

He read accounts of the attack to an audience stunned into silence.

“I can’t somehow believe this,” he added. “But I suppose I must.”

The rally ended there — and for the duration of the war and well beyond – the America First movement did, too.

This Week in Pittsburgh History: The Local Connections to a Super Bowl Upset