A Pitt professor labors to preserve the North Braddock mansion of Charles Schwab. 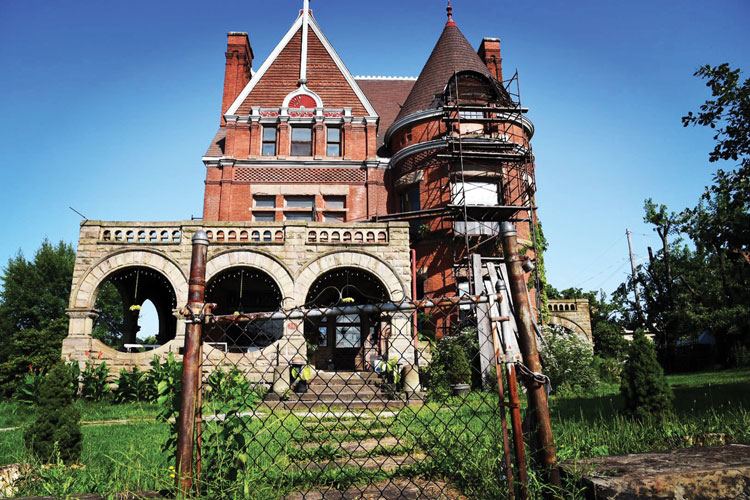 If you book a table at Superior Motors across the street from U.S. Steel’s historic Edgar Thomson Plant in North Braddock, take a detour on your way to drive past the mansion of the mill’s legendary boss, Charles Schwab.

First things first — you may be thinking of the wrong Charles Schwab. The Charles Michael Schwab who lived in the Victorian brick and sandstone manor at 541 Jones Ave., with its Romanesque stone porch and porte-cochere, its twin towers and steeply gabled roof, was no stockbroker. He was a steel tycoon.

Schwab was 17 when he took a job on a survey crew at Andrew Carnegie’s new rail mill in Braddock and quickly rocketed up the ranks. In 1889, at the age of 27, Schwab was named Edgar Thomson’s superintendent and had a mansion built for himself and his wife, Eurana.

Charles soon went on to become president of Carnegie Steel and then U.S. Steel before jumping ship to Bethlehem Steel. He and Eurana didn’t stay in Braddock long, upgrading to JJ Vandergrift’s mansion, “Highmont,” on Pittsburgh’s “Millionaires Row” on Fifth Avenue in 1900.

In 1903, they moved to Manhattan and built Riverside, a 75-room French Renaissance chateau that occupied an entire city block on the Upper West Side. Nobody wanted to pay to heat the place after the childless couple died in 1939, including Mayor Fiorello LaGuardia, to whom it was offered, and it was demolished in 1948.

The North Braddock mansion, meanwhile, became a 3-story company perk. For 50 years, it housed the mill supervisors who succeeded Schwab. The school district used it for nearly 25 years as offices and classrooms. In 1984, a University of Pittsburgh professor of medicine who went on to head the Allegheny County Health Department, Dr. Bruce Dixon, purchased it.

“I was in awe of what he was doing. He was restoring it like he was the Smithsonian,” says John Hempel, 68, a retired Pitt biochemistry research professor and longtime board member at Carnegie’s first public library, which sits just down the street in Braddock. Hempel bought the house after Dixon died in 2013 and redubbed it “Schwixon” in honor of the two prior owners.

Hempel has had the 10-foot stained glass window restored at the landing of the great oak staircase, where the maiden it portrays overlooks a cluttered foyer commanded by a massive arched limestone fireplace. He also is turning the third-floor main tower room, originally unfinished and unfloored, into a hideaway nook.

Part of the ceiling in Eurana’s former bedroom collapsed earlier this year just as the ceiling in Charles’ old bedroom was being replastered due to leaks. Hempel and his partner, Bridget Miller, play it safe, sleeping in the adjacent billiards room while repairs continue.

The project may seem insurmountable, but that does not daunt Hempel. “What I always tell people is, is your house finished?” he says. “But we’re making progress.”

Outside, he has planted European oak and hybrid American chestnut saplings and hops; the latter now droop over the fence at the property’s rear. Hempel brought a bunch to Superior Motors, where they could be made into a cocktail tincture — an ideal toast to Braddock’s continued health.