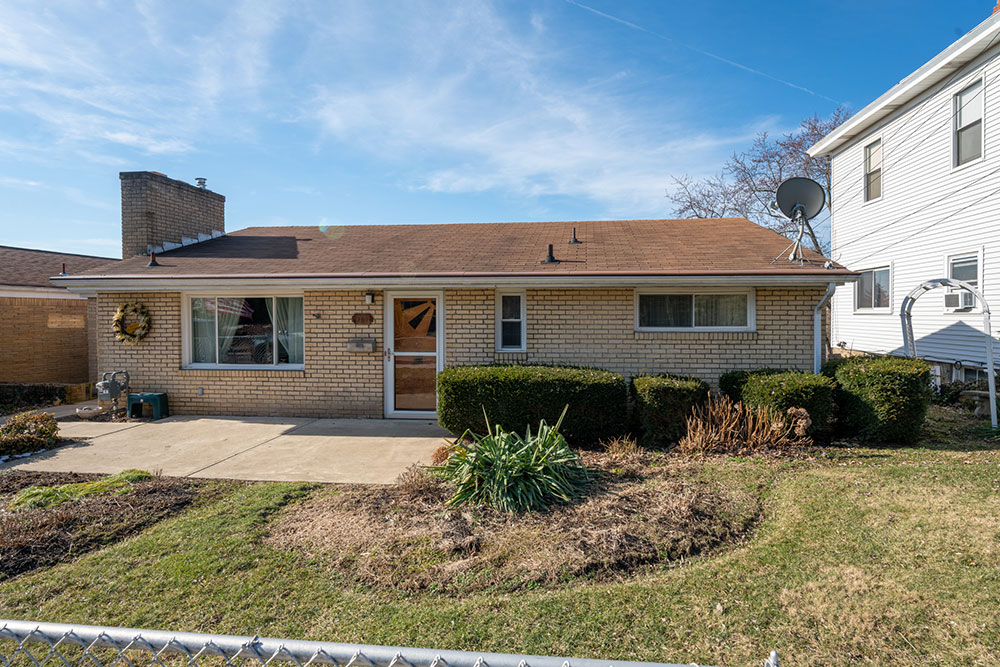 It was around that time that cement finisher Edward “Spitz” Caliguire built a house for his new bride, Helen, as a wedding gift. Located on a double lot at 269 Sebring Ave., it’s just a stone’s throw from Helen’s family home on the corner of Westfield Street and Sebring Avenue in Beechview.

“My aunt is 85 and never lived more than three blocks from the home she grew up in,” says Helen’s niece, Kim Hollabaugh, who is handling the sale of the home alongside other family members. “My uncle died in 2011. They were married in 1957 and together for almost 54 years.” 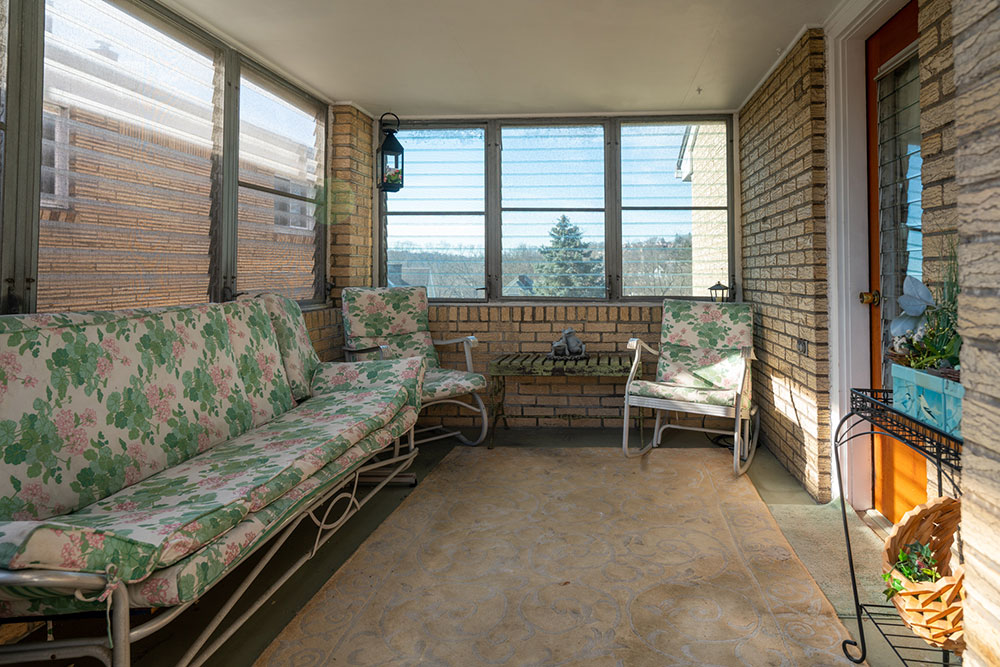 The Mid-Century Modern ranch is priced at $174,900 (MLS# 1541115, Richard Xander, Berkshire Hathaway, thepreferredrealty.com). It is open by appointment.

The never-remodeled, all-brick home — kept in immaculate shape by Helen — is a rare find for Beechview. It features three bedrooms, two bathrooms and an enclosed sun porch. Along with a cyclone fence in the front, the home’s property includes several planting beds filled with perennials and flowering bushes.

“She was an avid gardener,” Hollabaugh says of her aunt, who is no longer able to live on her own. “The crocuses are already starting to come up. She was out front tending to the yard last fall. She loved her flowers.” 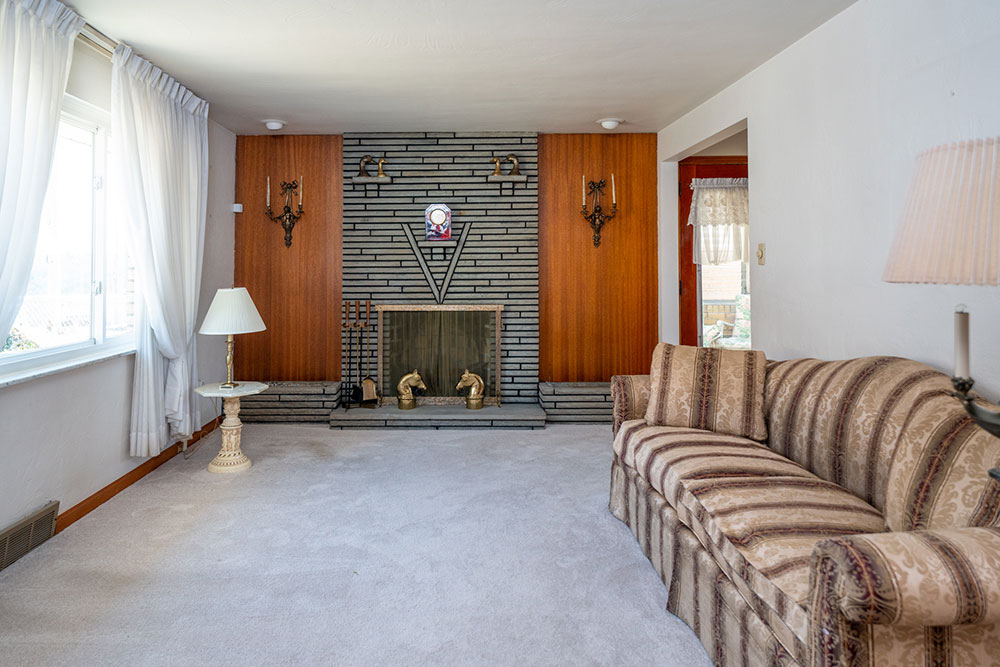 The home’s original smooth-skin front door has a doorknob placed in the center of it; there’s also a three-fan window detail. Once inside, the stacked-stone fireplace grabs your attention thanks to a center “V” detail and oak side panels with brick planters at the base. There’s also an original light fixture hanging from a chain. Carpet covers the original floors.

Further in, the kitchen is wonderfully preserved in time, right down to the wall oven. The oak cabinets feature original black hardware, while Formica countertops and vinyl floors finish the vignette. 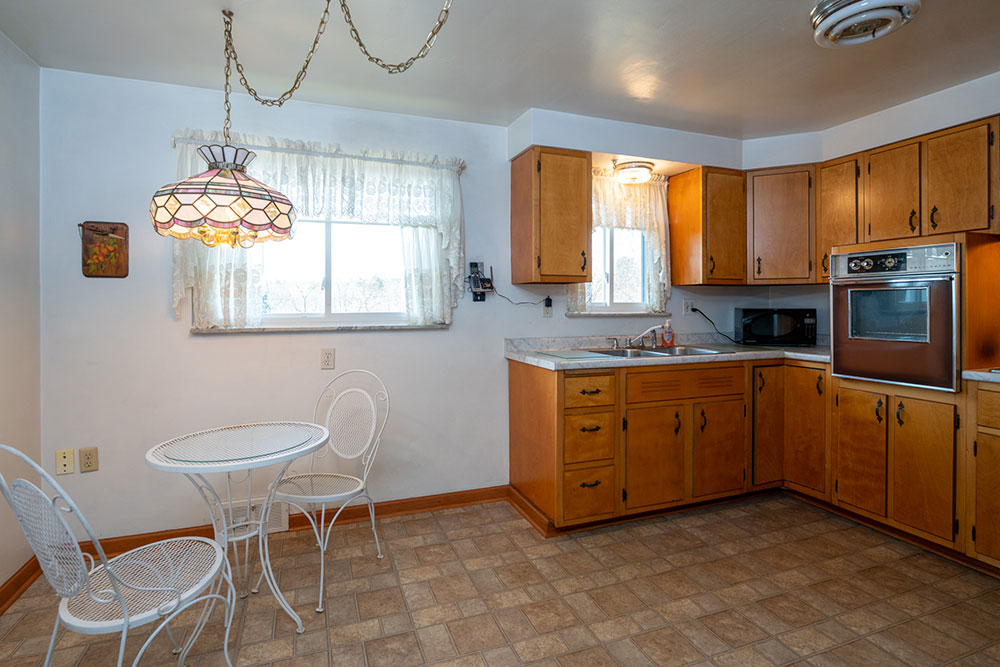 Hollabaugh says that after the Caliguires married, her uncle became a police officer with the City of Pittsburgh, working in the motorcycle corps.

“He worked [from] 3 to 11 and would come home for his dinner break,” Hollabaugh says. “[Aunt Helen] loved to cook for him.”

A door from the kitchen leads to the enclosed brick sun porch, where Hollabaugh says Helen spent many days enjoying the view. 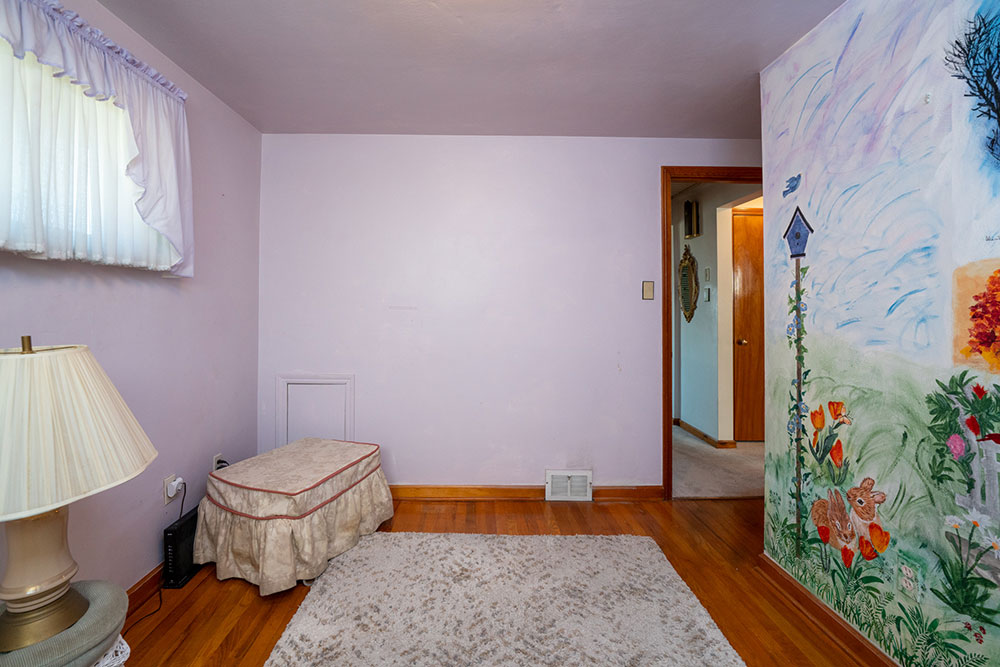 The home’s three bedrooms all have the original hardwood floors and high, sliding casement windows. The built-in closets in each room have sliding doors with recessed circle brass pulls.

Painted a light lavender, the smallest of the three bedrooms features a wall mural Helen painted.

“She is a super-creative person,” Hollabaugh says. “She freehanded the mural. It took her several weeks and has images from spring, summer, fall and winter.” 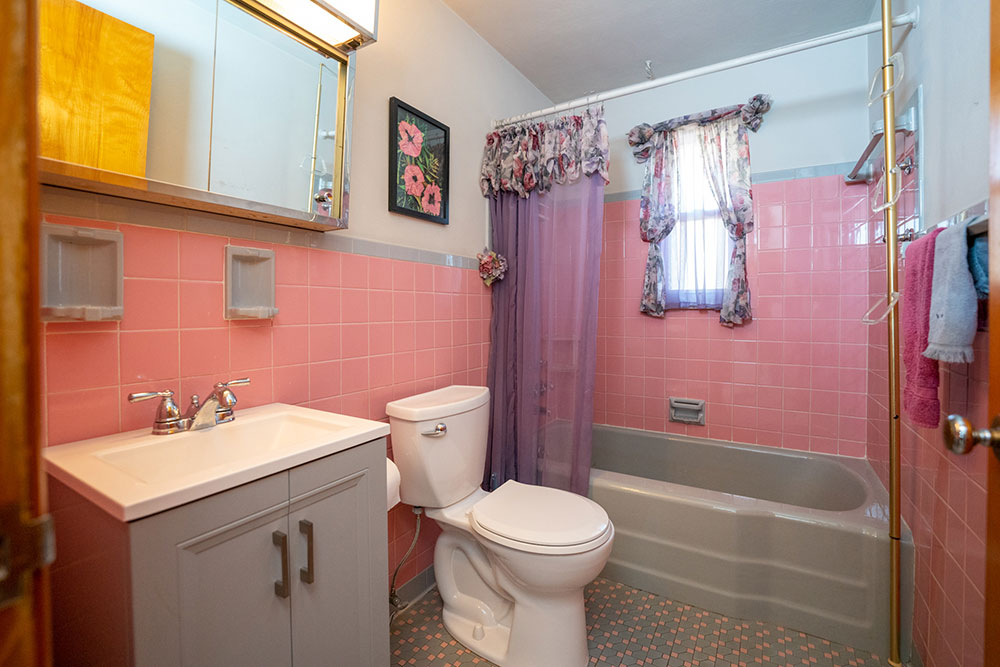 In the original full bathroom, the pink square tiles with gray bullnose and a gray alcove tub charms. The basement has a large cedar closet and very high ceilings. There’s also shelving and a large work table where Helen did many of her crafts.

Also in the basement is a full bathroom featuring an angled shower with an aluminum shower door and mosaic tile. A brass bubble light hangs next to the vanity mirror. The backyard is large, and a long driveway provides access to the one-car garage.

Hollabaugh says she and her sisters enjoyed saving many of the memories the family made in the home — and they continue to marvel over the remarkable way Helen kept it throughout the years.

“She was a wonderful housekeeper, and she just loved this house,“ Hollabaugh says.

About: Beechview (beechviewing.org)
Population: 7,974
Planes, Trains & Automobiles: A 25-minute commute to the airport. Daily transport via Port Authority’s T-Rail line and street buses. On-street and metered parking. Rideshare available.
Schools: City of Pittsburgh, including Pittsburgh Obama 6-12, an international studies program just around the corner at Highland Avenue and East Liberty Boulevard. (pghschools.org)
Neighborhoods: Beechview has a vibrant business community. Renovations have recently been made to the local Carnegie Library and the community center. The T-Lines run along the main drag, making for an easy commute to the city. The neighborhood also is home to the steepest residential street in the world, Canton Avenue, which has a 37% grade and was featured in an automobile campaign for Audi.