Things Looking 'Up' in Shadyside

Eat Street: Interview with chef Ron DeLuca of the new Shadyside eatery ^UP. 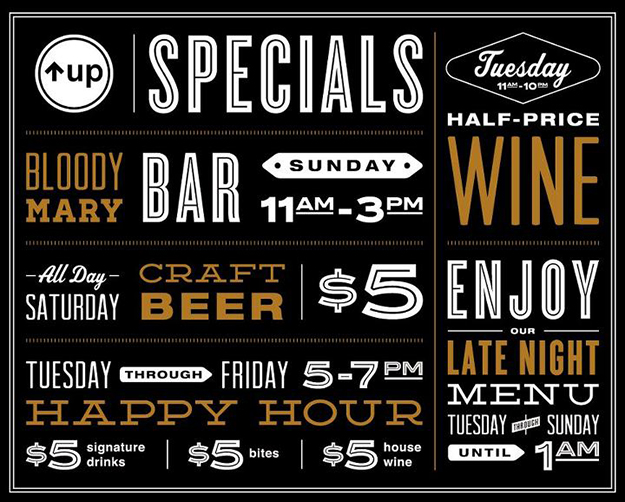 DELUCA HEADS "UP" KITCHEN AT NEW SHADYSIDE EATERY
Chef Ron DeLuca has been satisfying locals' hunger pangs for years, with previous stints at Blue and Pangea — and now at ^UP Modern Kitchen in Shadyside. ^UP, which opened earlier this summer, has attracted some of DeLuca's former patrons as well as some new ones, too. He recently opened up about his experiences and culinary preferences.

When did you realize you wanted to be a chef?
I’ve always been cooking at home, even when I was young. I decided after college I was going into the kitchen.

If you could only cook with three ingredients, what would you choose?
Olive oil, basil and pork. Olive oil and basil together make a good Italian dish. And pork — well, there’s nothing about the pig head to toe that I don’t love.

How do you create different menu items?
I get the juices flowing through colors, through pictures and while I’m driving. I also go off of what vendors recommend and what the catch of the day is. It’s a spur-of-the-moment decision.

FOOD NETWORK MAGAZINE & BON APPETIT SHINE SPOTLIGHT ON LOCAL FOOD SCENE
It's no secret that our fair city is amazing. If you're skeptical, just ask the film crews that have been filing in for a more balanced opinion (or see The Dark Knight Rises, if you haven't already, for clear evidence). Beyond the city's appearance, though, there are stars among us. In the kitchen.

Recently, some of our culinary champions have received a bit of recognition: It was revealed this week that Bon Appetit magazine's resident "Foodist" nominated Cure in Lawrenceville, owned and operated by celebrated chef Justin Severino, as one of its Top 50 Best New Restaurants; the eatery, which opened late last year and offers house-cured meats, is one of two Pennsylvania establishments included in the list.

And over in the Strip, Primanti Bros. has received a nod from the editors of Food Network Magazine for its kielbasa and cheese sandwich, crowned with the traditional fry/coleslaw combo; the classic sandwich was the only one in the magazine's "50 States, 50 Sandwiches" feature that came from the Keystone State. Congrats to the crews at both places!

A "DARLING" OF A SAUVIGNON BLANC
This week’s pick is the Fairview Sauvignon Blanc, which proudly displays its place of origin on the label: a place called Darling, located on the west coast of South Africa. Fairview is a third-generation, family-owned wine and cheese farm on the slopes of Paarl Mountain. Grapes from this area are known for character and freshness and, in this case, create a balanced, food-friendly white.

"The palate is racy and clean, with kiwi, citrus, lime zest and green melon. Great with fresh shellfish," says Steve Pollack, a wine buyer for the Chairman's Selection program. Quoted at $14.99, this Sauvignon Blanc is a good value at $8.99.

This article appears in the August 2012 issue of Eat Street.
Categories: PGHeats