The Westmoreland Reporter Who “Invented the Interview”

Anne Royall grew up just outside Pittsburgh but didn’t see it until she was a renowned journalist. 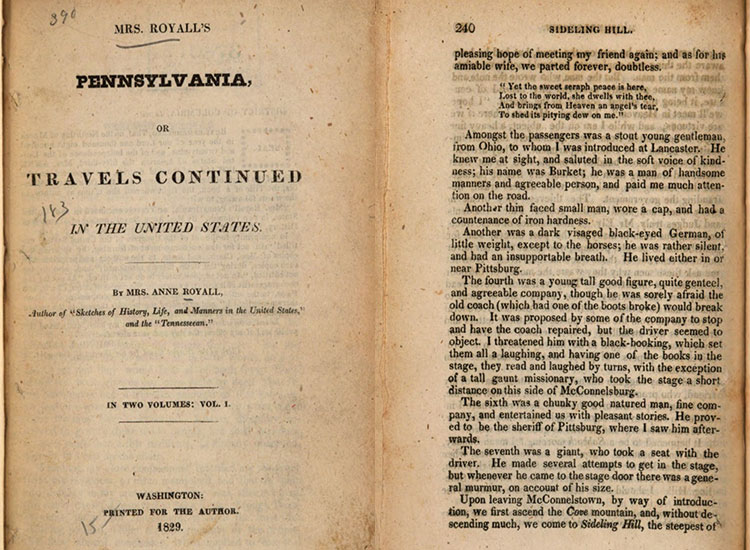 On Dec. 4, 1828, the pioneering journalist and travel writer Anne Royall arrived via stagecoach in Pittsburgh. She later wrote about the ride from Greensburg: “The day was fine, and the country beautiful; and my pleasure may easily be imagined.”

It was rare to find Royall in such an appreciative and agreeable mood. She was a fiery and demanding reporter who campaigned hard against all incompetence. She ranted about most organized religions, described many of the people she met in blunt terms and never hid her criticisms, personal reactions and strong opinions.

Royall was born Anne Newport in 1769 in Baltimore. Her family moved to western Pennsylvania — then the frontier — when she was 3, settling first in Hanna’s Town, Westmoreland County; fortunately, they hunkered down in a nearby fort when the town was burned to the ground by Native Americans and their British allies in July 1782. The devastated family eventually resettled in western Virginia; there, Anne met the much older William Royall, whom she married in 1797.

Her husband died in 1812 — and his family prevented Anne from getting any of his estate. She began her travels; she became a published writer at age 55. She proved to be prolific, publishing many books — including two volumes of “Pennsylvania.”

Already widely traveled — and initially very upset over lost luggage — she proved to be a lively and busy visitor to our city. “There is no city in the Union I was more anxious to see, than Pittsburg. For though I had spent some years of my childhood in Westmoreland, the adjoining county, I had never seen it … from the mud on the pavements, occasioned by the bursting of pipes (which happened at that time) to convey water over the city, the smoke and black from the coal, and fumes of the furnaces, I had a most fatiguing tour of it.

Still, the city’s industry evidently impressed Royall: “Every article manufactured out of iron, copper, brass, tin, leather or wood, is made in Pittsburg, in a superior style … But what distinguishes Pittsburg from every other part of the union, is the fame she has acquired from her steam engine foundries … People ought to go to Pittsburg to learn industry.”

Eventually, Royall settled in Washington, D.C., where she also founded and edited two influential newspapers. She has been called “the mother of journalism and the inventor of the interview” as well as “Grandma of the Muckrakers.” She was “the most widely known woman of her day and country. Dead, she has been long forgotten,” according to a biographer, Sarah Harvey Porter, who also noted, “She met and talked with every man who became President of the United States from George Washington to Abraham Lincoln, inclusive.”

This article appears in the December 2019 issue of Pittsburgh Magazine.
Categories: Rick Sebak