Their No. 1 pick knows how to play, otherwise he wouldn’t have been drafted in the first round. But now that he’s demonstrated a grasp of how to be the quarterback, the Steelers have come to a conclusion: Their future is now. 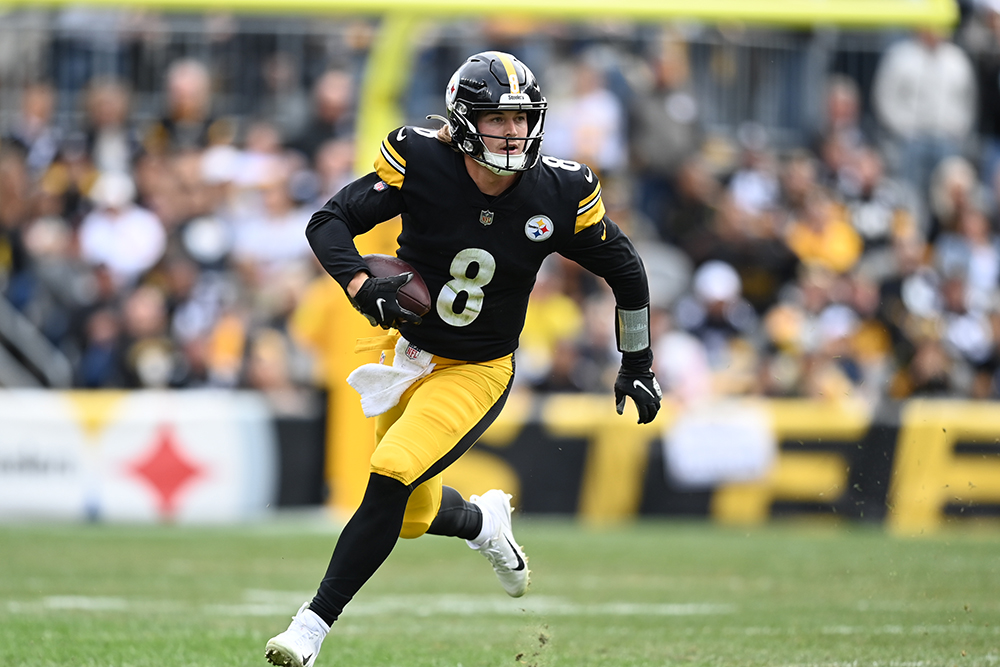 He was drafted in the first round to be the face of the franchise sooner or later.

Rookie quarterback Kenny Pickett apparently chose the former — even before the Steelers got around to doing so.

“He gave me a face,” rookie wide receiver Calvin Austin III reported regarding Pickett this week.

The context behind that revelation was a discussion that included a question to Austin about whether Pickett is perceived by his teammates to be a normal guy with football ability or one of those obsessed, football-lifer types.

“I would say somewhere in between,” Austin assessed. “He’s very normal, you know what I’m saying? Normal, cool, everything. But you can tell when it’s football, he’s for real about that. He demands everybody be on point with him. You gotta be on point with him or he’s gonna let you know.

“You’re gonna have to approach it with a certain mindset and [the same] level of intensity as him.”

Austin acknowledged on Wednesday the ramifications of straying from that standard: The “he gave me a face” admonishment.

“If he does a face you already know, ‘OK, yeah, pick that up,’” Austin emphasized.

That Pickett can already make his point non-verbally in such situations is further confirmation of the pre-draft scouting assessments that considered Pickett confident, poised and mature beyond his years — and thus, more ready for the NFL than a typical quarterback prospect.

What he can do with his arm and legs at the NFL level was on display initially against the Jets. The intangibles Pickett oozes help facilitate such play-making and compel those around him to follow their leader, even if Pickett has only just begun to lead.

There’s something happening all of a sudden with the Steelers — and it’s fascinating.

It’ll continue to be, even if the switch to Pickett proves to be less than a season-salvaging reaction to a 1-3 start that’s as ominous as it has been tough to stomach. Head coach Mike Tomlin turned to Pickett at halftime of the Jets game, in part because Tomlin was seeking a “spark” for an offense that appeared to be in need of defibrillator paddles.

Pickett, who admittedly endeavors never to get “too high or too low,” quickly concluded it was time to err on the side of his fiery, competitive side.

“I know I showed some emotion out there on Sunday, I felt like we needed it,” Pickett explained. “It was really: Read the room, read the situation and fit the kind of leadership style that needs to be fit.”

Veteran quarterbacks can struggle with that. Pickett appears to be a natural at it, and also well-acquainted with a more business-like standard operating procedure.

Those who aren’t on board with that get “a face” that demands they get on board.

“I just like a clean huddle,” Pickett added. “I want everyone to hear the call. I want everyone to be on their p’s and q’s with what they have to do. I don’t want to come back and hear a guy say he didn’t hear it because they were talking and stuff like that.

“I don’t go crazy. I don’t yell and scream. But when I’m in there, they know the deal.”

Part of Pickett’s deal is he’ll have to play a cleaner game than he did against the Jets. For all the aggressiveness and play-making that energized the fans and his teammates, the poor pitch to running back Jaylen Warren and the ill-advised pass to tight end Pat Freiermuth that ended up being deflected and ultimately intercepted helped doom the Steelers.

But such mistakes figure to be fewer and farther between as Pickett gains experience in action and, just as significantly, in practice. The rest of what he’s seemingly already perfected ought to really start paying dividends right about then.

So why not get that process launched as soon as possible?

It’s either that or face the consequences of playing someone other than Pickett at QB. The Steelers have seen enough of those already to conclude they’ve seen enough.

“That’s what we got him for, to come in and make plays as soon as possible,” cornerback Arthur Maulet observed. “I’m excited to see what he’s going to do.”