The Sleeping Octopus Awakens in Wilkinsburg

The revitalization of the three-story Yingling Mansion is part of the borough’s growing renaissance. 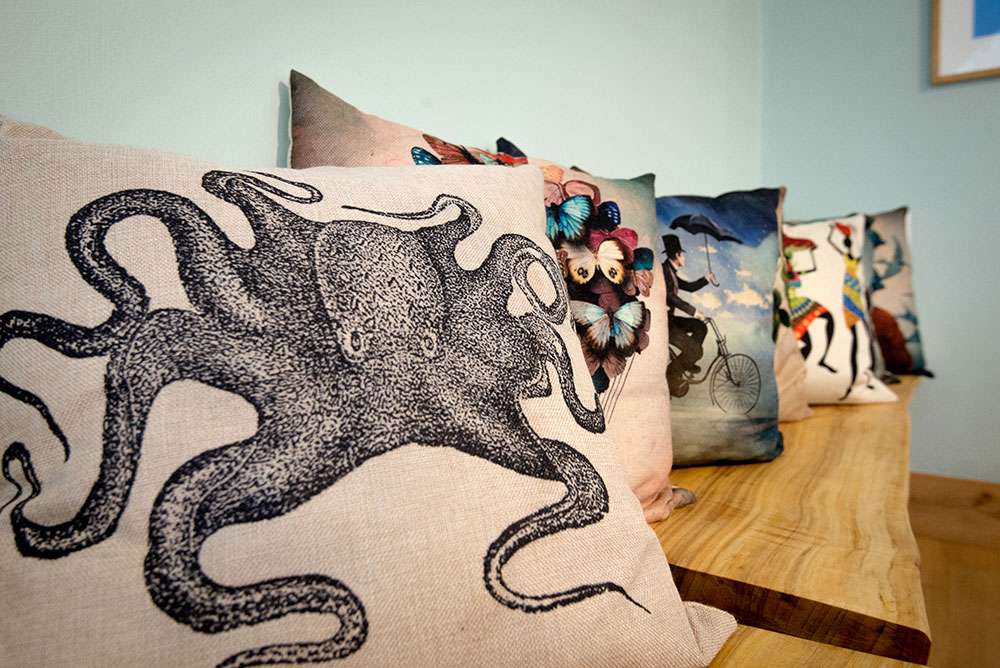 Brian Sieffert was attempting to escape Penn Avenue traffic, following his navigation system as it directed him down Hill Street in Wilkinsburg, when he saw it rise up on the right — the old Yingling Mansion, a massive, battered Georgian Revival with wide, white pillars on the porch and a for-sale sign in the yard.

Sieffert immediately pulled over and parked his car. After noticing the main gate to the area adjacent to the carriage house was open, Sieffert went up to the home’s kitchen door and knocked. Inside were an architect and a realtor who just happened to have wrapped up a meeting with another interested party.

The pair dutifully answered all of Sieffert’s questions, but seemed unimpressed with his interest. 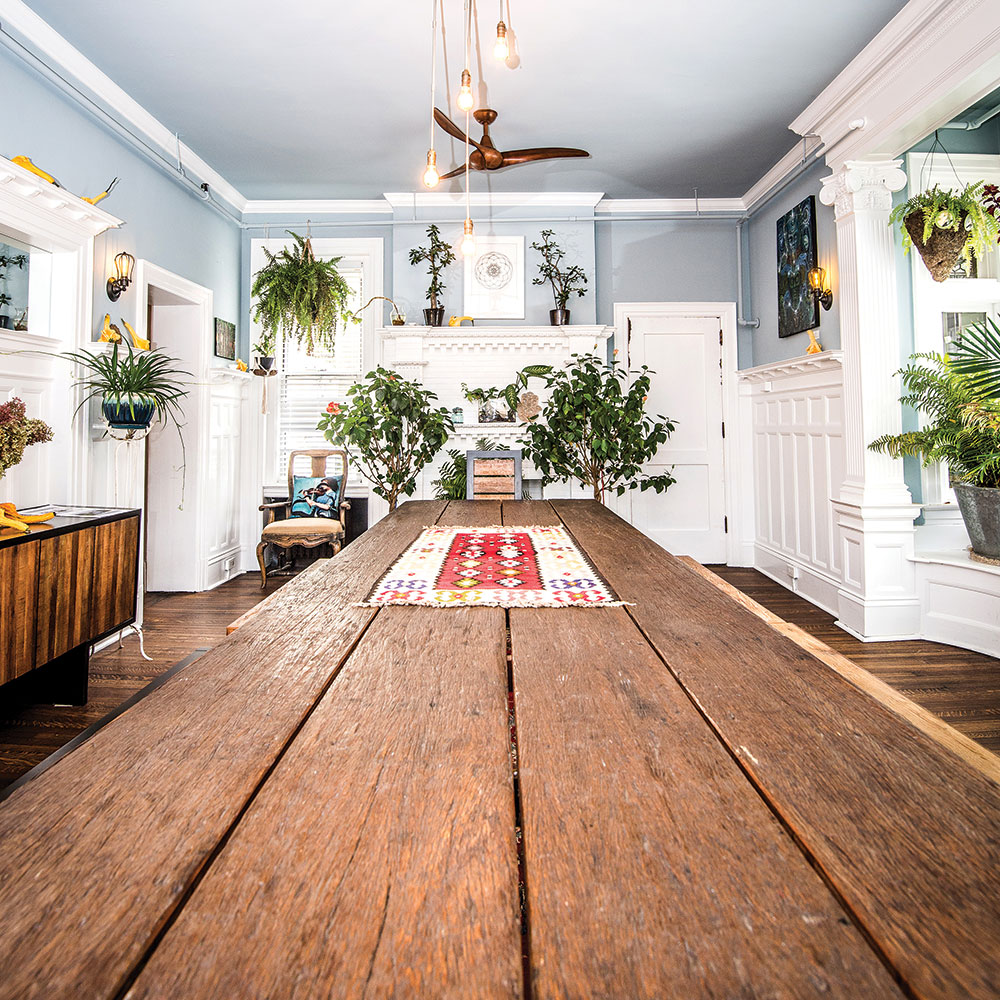 “They’d been trying to sell it for two years,” Sieffert says. “They were tired of the tire kickers. A lot of people had a lot of grandiose ideas but no follow through.”

Sieffert was different. A partner at Lawrenceville-based Artemis Construction & Design, he has a background in restoration. He saw something in Wilkinsburg that many others, distracted by the empty storefronts, fallen porches and overgrown vegetation, had missed.

A RENAISSANCE IN PROGRESS 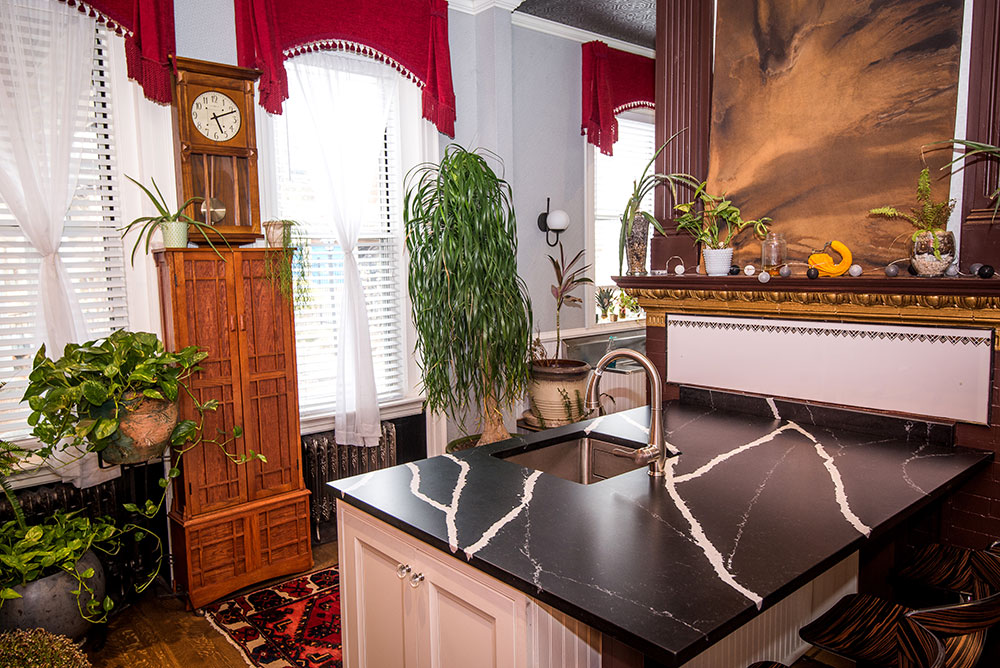 Call it a renaissance or revitalization, but Wilkinsburg is beginning to overcome the economic and social issues that have plagued the borough since the early 1990s, including crime, retail decline and urban flight.

“You definitely hear a new buzz about Wilkinsburg now,” says Marita Garrett, who is both the mayor and the founder of Civically, a Wilkinsburg-based nonprofit.

Depending on whom you ask, that buzz began either in 2008 with the creation of the Wilkinsburg Community Development Corporation and its comprehensive revitalization plan or in 2013 when a new regime swept into city council and the school board, vowing transparency and cooperation.

But everyone agrees the buzz reached a new pitch in 2015. That’s when the borough was accepted into the Pennsylvania Downtown Center’s Main Street Program, which is funded by the Department of Community and Economic Development and takes a community-based approach to rehabbing the state’s central business districts.

(It’s also the year that residents voted to end prohibition, allowing restaurants in the once-dry borough to apply for liquor licenses.) 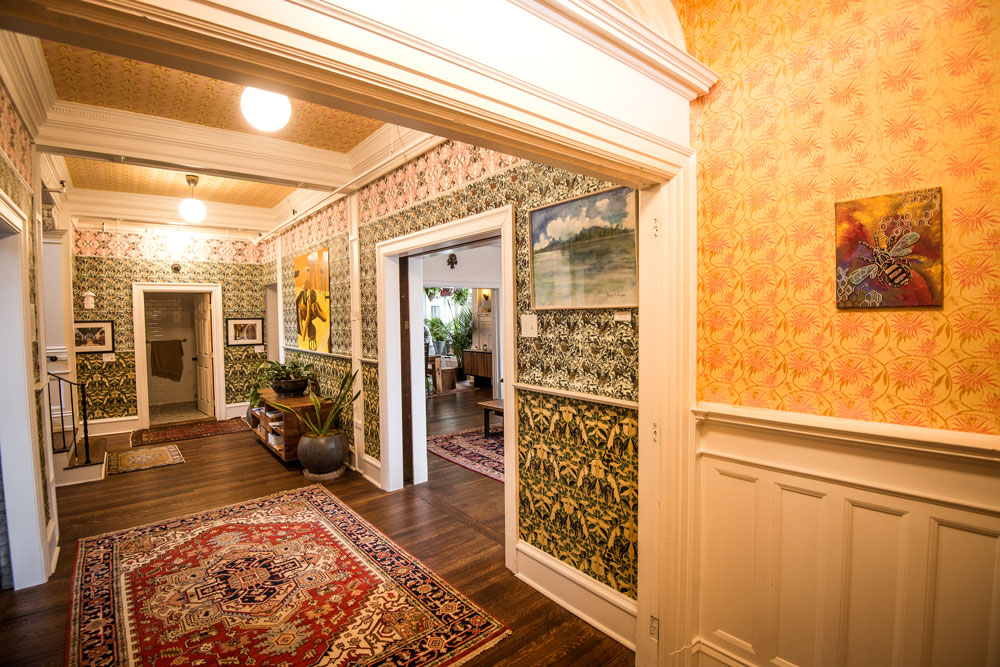 Suddenly, everyone wanted to talk about Wilkinsburg’s tree-lined streets and proximity to Frick Park, its 19th century architecture and location on the East Busway. New businesses such as Leona’s Ice Cream Sandwiches and Knotzland Bowties moved in and stalwarts including Tiffany’s on Wood and Nancy’s Revival (née Diner) moved up. It’s a process that brings to mind the successful — and sometimes controversial — transformations of fellow East End neighborhoods.

“All of those neighborhoods along Penn Avenue have undergone a renaissance, and we’d like to be next,” says Tracey Evans, executive director of the development corporation.

But to do it right and include all, Garrett and Evans agree, they will need to not only retain and engage current residents and business owners but court a new generation of buyers for the borough’s nearly 1,000 vacant properties, many of which are masked by overgrown vines and burdened with tax liens.

“The community wants to see all of those buildings and vacant properties restored,” Evans says. “We need to bring them back to life as much as we can.” 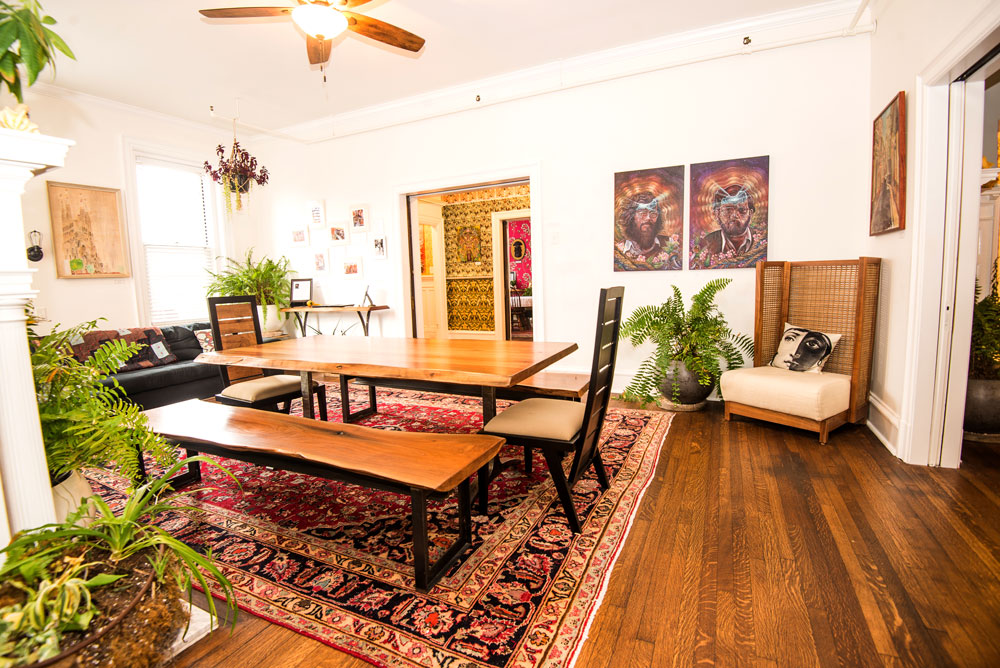 The restoration of the Yingling Mansion has served as a blueprint for how it can be accomplished.

But, as Sieffert recalls, it was not an easy process. Even his wife, Nicole Santella, was skeptical.

“Nic,” he calls to her on an October afternoon from his seat at their 14-person dining table made from the planks of an old fishing vessel. “What did you think of this house when I first brought you here?”

Santella stops in the hallway and turns, still holding one of the many potted plants she’s brought in from the cold and is distributing in corners throughout the 30-room house. She stares at him for a moment.

Sieffert nods, a smile twitching at the corner of his mouth. He knows what’s coming.

Santella throws her head back and laughs, the sound loud and ringing.

A MANSION WITH HISTORY 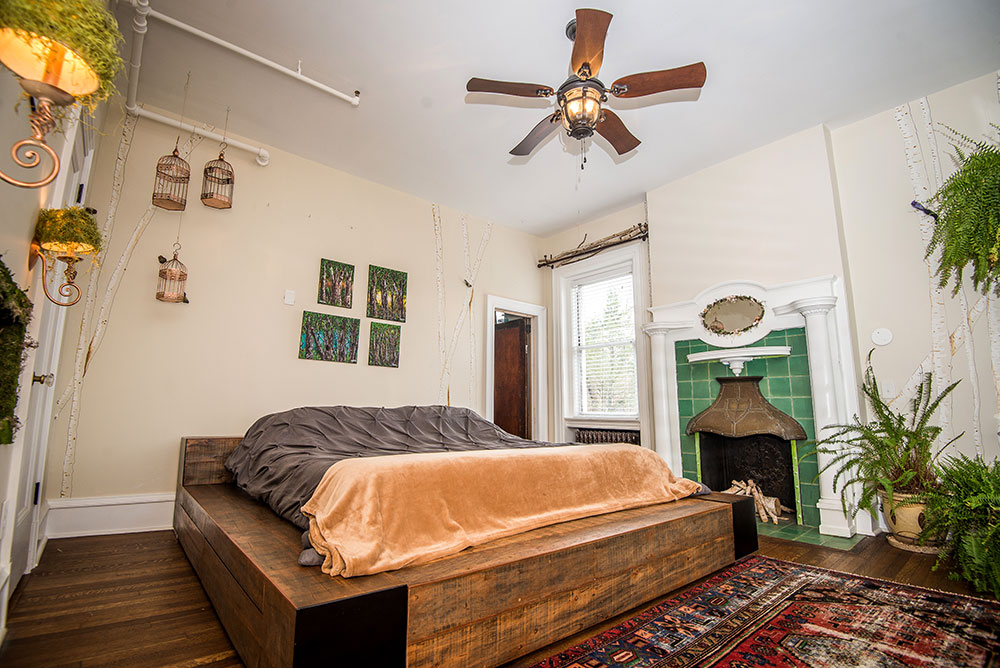 The three-story mansion was built in 1905 for Pittsburgh brick manufacturer and dealer Roswell Gardner Yingling but spent much of its existence as a hospital and personal care home. So by the time Sieffert and Santella stepped inside in 2016, all of the turn-of-the-century charm had been wrung out of it. The grand rooms were whittled into tiny offices and living quarters, hardwood floors were covered in linoleum and carved wooden doors had been replaced with fire-rated versions bordered by metal frames.

“You could feel that neglected energy,” Sieffert says. “Our goal was getting it to look like a home again, rather than an institution.”

Although Santella still maintained her day job, the couple halted everything else in their lives for five months and worked on the house every day of the week, sometimes so late into the night that they ended up sleeping in their car.

They ripped out the remnants of the personal care home, rewired the entire structure, exposed and refinished the original hardwoods, repainted the fireplaces and brought in Nancy Sakino Spears of Savoy Interior Design to create a modern, gray and white kitchen in a classic style.

The renovation culminated in a 2018 Junior League of Pittsburgh Show House event, with local designers temporarily styling 28 rooms in the 6,200-square-foot home. 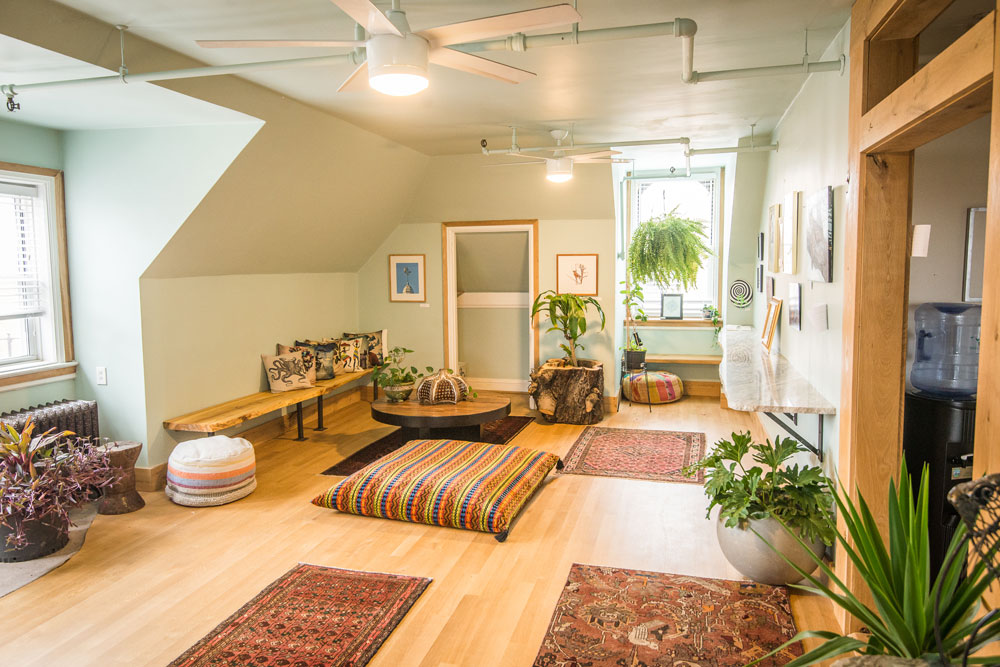 Today, the decor is both carefully curated and charmingly organic. A range of genres and styles — paintings, sculpture, mixed media — from local artists (including the Wilkinsburg code enforcer’s son) grace the walls and tabletops, appearing, disappearing and reappearing as seasons and events change.

For example, in October, in anticipation of Preservation Pittsburgh’s Sacred Spaces tour, Sieffert acquired a collection of William White church paintings from the late artist’s daughter. But Santella also adorned the first floor with dozens of whimsical and misshapen gourds that had accidently rooted in her compost pile.

The result of the dichotomy is a space that feels broken-in and welcoming, which is fitting; Sieffert and Santella always intended the mansion to serve as a community gathering spot that brings people together through wellness, art, sustainability and community development.

The mansion currently is listed on Airbnb under its new moniker, The Sleeping Octopus. According to the owners, an octopus sleeps in a ball with its tentacles hidden from view. The mansion, they believe, also was sleeping — with its potential hidden — before being awakened again.

The couple also regularly hosts events — including artist John Shook’s Art Jam exhibition, the Wilkinsburg Garden Symposium and a conference on the therapeutic uses of psychedelics — and invites artists to display and sell their art. Many visitors have declared the wide front room on the mansion’s third floor, which is bathed in natural light, furnished with beanbag chairs and bedecked in vibrant paintings, their favorite space.

LOOKING TOWARD THE FUTURE 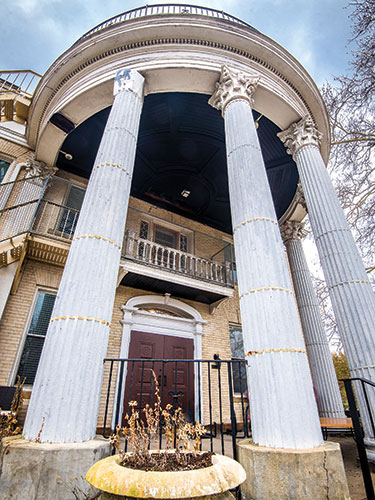 But the couple is also supporting the community in more concrete ways. Sieffert is a member of the Wilkinsburg Community Development Corp. board of directors, making it his stated mission to attract new residents and walk them through the often-confusing process of purchasing a vacant property. Initial plans also include converting the borough from a neighborhood of renters into one of homeowners. In addition, he is renovating a business-district building, which will soon house a confectionary and salon.

Santella, meanwhile, serves on the borough’s planning commission and is helping to lead pollinator and community garden efforts. The mansion’s yard was recently designated an Audubon Society Backyard Habitat.

Though the couple bought the Yingling Mansion with the intention of helping to revitalize the surrounding community, they are quick to remind visitors that Wilkinsburg’s transformation began long before they purchased their house and that it will take the effort of the entire community to ensure it continues.

“We didn’t want to come in and act like we’re saviors,” Sieffert says. “We wanted to join forces with anyone who’s doing things for Wilkinsburg. A lot of the efforts here are from within. Now we need to add people, convert people and keep people, without leaving others displaced.”