The Post is Quite Good, I, Tonya is Even Better

Reviews of "The Post," "I, Tonya" and "The Commuter," plus local movie news and notes. 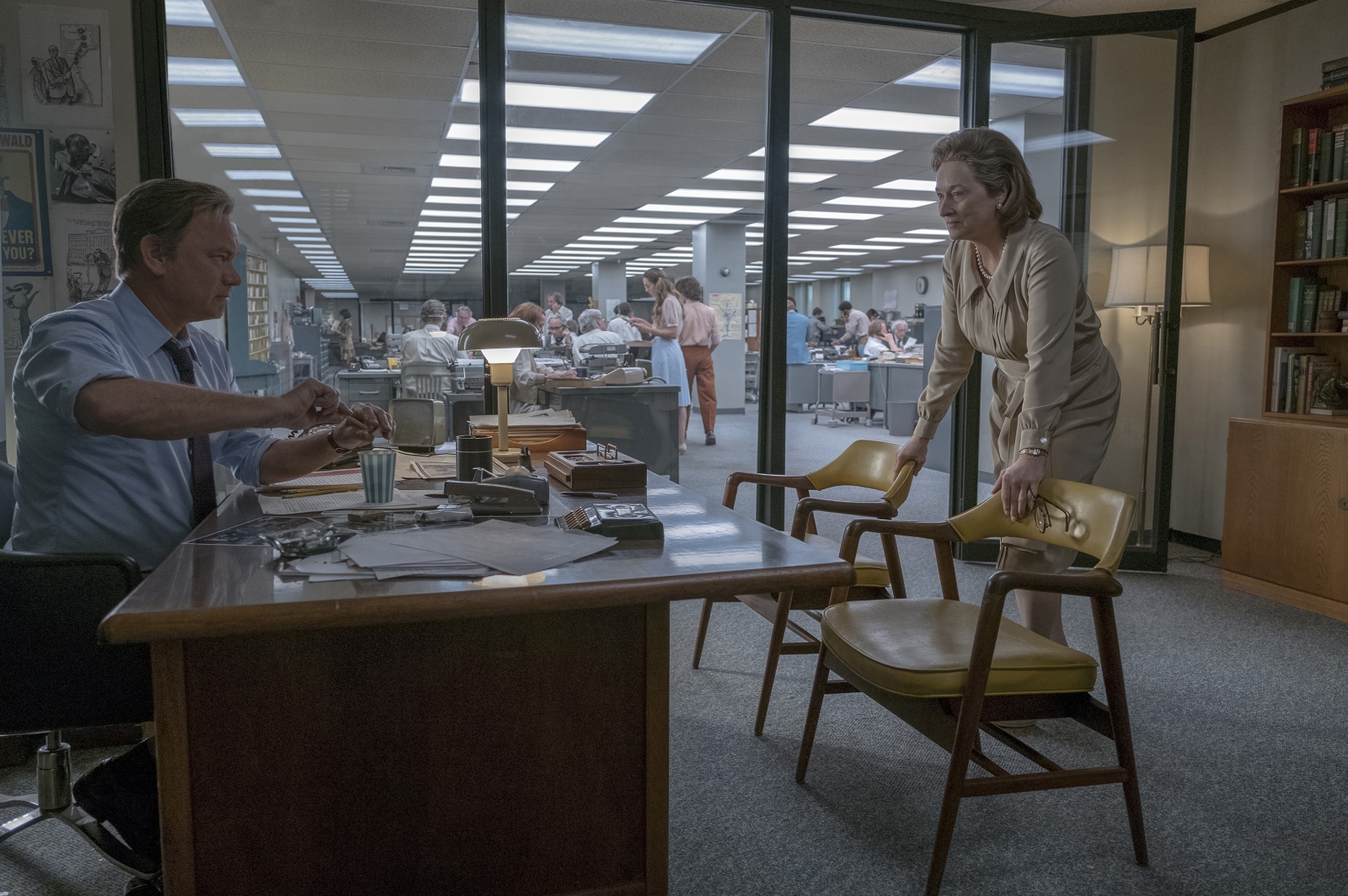 It can be very difficult to evaluate whether a Steven Spielberg movie is actually great or simply very well-made. Not only are his films (except “Kingdom of the Crystal Skull”) always very well-made, they are well-made in precisely the ways we’ve been trained to view movies: grandeur, mystery, wonder, characters gazing slightly upward at something breathtaking.

Moreover, “The Post,” Spielberg’s latest awards-season darling, couldn’t arrive at a better time: A tale elucidating the essential role of the press and depicting how its all-stars toil to uncover the truth is quite fervently needed in an era when institutions attack journalists in terms that would’ve made Nixon blush. This is one of those movies that is very good for right now.

So it definitely seems that “The Post” is a great movie; it is replete with Spielbergian virtuosity and speaks in a remarkably clear and present voice.

An all-star cast — Meryl Streep, Tom Hanks, Bradley Whitford, Bob Odenkirk, Alison Brie, Sarah Paulson, Matthew Rhys and many more — recreates a moment in the history of the Washington Post. The New York Times has just unveiled the first revelations from the Pentagon Papers, a bombshell, leaked study detailing cover-ups, obfuscations and outright lies surrounding the Vietnam war. Meanwhile, Kay Graham (Streep) has just assumed the role of publisher — the first woman in the history of the venerable paper to call the shots — as the Post is preparing a public offering.

The dilemma sets in when the Post obtains the leaked documents as well; Nixon’s administration is trying to block publication, which would represent an unacceptable erosion of the First Amendment. On the other hand, being sued by the government could drag the paper into financial ruin.

It’s not hard to see the same story told in “The Post” recreated in a one-set stage play; Graham and Ben Bradlee (Hanks) in the newsroom while reporters and board members flit in and out, arguing practicality against propriety. It’d be quite good that way. It’s quite good this way as well, though it is almost curious to see it told with a John Williams score and Janusz Kamiński cinematography; it’s a relatively small tale writ very, very large.

Opening and closing scenes in Vietnam and the Watergate hotel, respectively, feel tacked on. But the biggest knock on “The Post” is one of comparison; while I am very glad to have a story of journalistic triumph told in 2018, a slightly better film along the same lines won Best Picture just two years ago. “Spotlight” is in every way the slight superior of “The Post,” and it’s too fresh in my mind to set aside.

Still, this is a vital movie done very well. It’s Spielberg tackling a moment in history; it wasn’t going to go wrong.

As strong as “The Post” is, it’s a good week when such a film is the second-best new release. The finest film to arrive in Pittsburgh theaters this week is “I, Tonya,” the partial biopic of embattled figure skater Tonya Harding.

Margot Robbie is perfect as Harding, tracing her deliberate and defiant climb through the ranks of figure skating and her swift downfall after some hired goons took it upon themselves (or maybe upon Harding’s explicit instruction, depending on who you believe) to kneecap Nancy Kerrigan in 1994.

This isn’t a play-by-play of that incident, though its prelude and execution are rendered in hilarious detail. Rather, “I, Tonya” examines the arc of Harding’s career and life, revealing a story that’s more Greek tragedy than tabloid sensation. Abused by her parents and young husband (the buffon formerly known as Jeff Gillooly is played, quite well, by Sebastian Stan), Harding came from near-poverty and trained into the most athletically gifted female skater in the world. She was beset, however, with denials by the sportocracy — she was too rough, too homespun, not glamorous enough — and spent her career trying to escape the circumstances of her life.

Circumstances which, whether she was involved or not, would eventually bring her down.

The cast is perfect — Allison Janney won a well-deserved Golden Globe for playing Harding’s mother, LaVona Fay Golden — and director Craig Gillespie (a bit of a journeyman) apes the right styles. And lest anyone think this is a gritty expose, trust me: you’ll laugh. This is a movie that knows that while the core of the story might be heartbreaking, the surface is hilarious.

Well, Liam Neeson’s having trouble again. Seems to happen to him every January — and often in the hands of director Jaume Collet-Serra, who imperils Neeson for the fourth time in “The Commuter,” a brain-dead but distracting action whodunit. While on a commuter train out of New York, Neeson’s ex-cop is approached by a mysterious woman (Vera Farmiga) demanding that he take a pile of cash and identify which of his fellow passengers is an FBI informant; her superiors (we never — and I mean never — actually learn who’s pulling the strings) are either going to kill their target with Neeson’s help, or they’ll kill Neeson’s family. (Nominally his character has a name, but let’s not play games; he’s playing the popular conception of Liam Neeson.) Some fine action sequences follow, and the cast is game; the script, by a trio of relative unknowns, doesn’t even try to make a lick of sense, though. If you can watch “The Commuter” with a sort of detached bemusement, you’ll enjoy it just enough — just be sure you never pay any actual attention.

The Montage: After a month handed over to “The Last Jedi,” the Rangos Giant Cinema returns to its core programming on Monday with a quartet of science docs: “Dream Big: Engineering our World,” “Amazon Adventure 3D,” “Tiny Giants 3D” and “Animalopolis.” If you haven’t seen the massive screen, “Amazon Adventure” is a breathtaking way to do so … One of my favorite comedies, “Airplane,” is next week’s classic pick at AMC Waterfront 22, with the local favorite “Slap Shot” to follow … The shock-and-more-shock films directed by John Waters and starring Divine get a week at Row House Cinema starting today, with “Pink Flamingos,” “Female Trouble,” “Multiple Maniacs” and “Polyester” on tap … the 1998 art documentary “A Day on the Grand Canal with the Emperor of China, or: Surface Is Illusion But So Is Depth” will be revived this week at the Harris Theater.