The best-laid plans included Mitch Trubisky doing just enough in conjunction with a dominant defense to make the 2022 season a special one. So far, it hasn't worked out that way and if things don't turn around soon, the Steelers must be prepared to make a change. 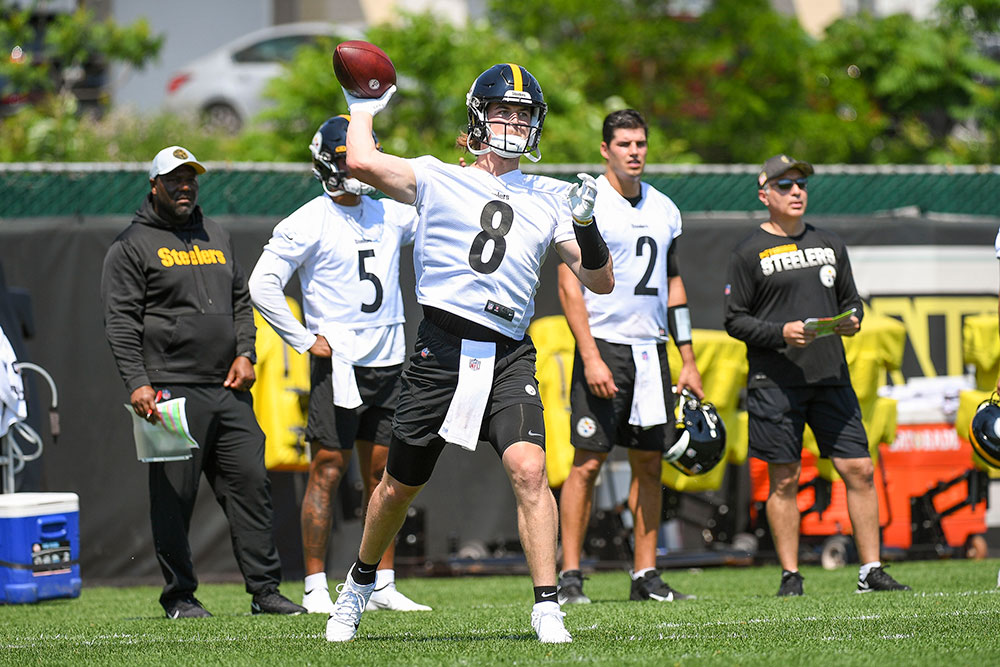 There’s a fine line between determined and delusional.

We may be about to find out on which side Mike Tomlin resides.

The Steelers’ head coach was predictable in his bravado this week.

In response to the Steelers’ 1-2 start, a slog that’s included an almost inexplicable escape in Cincinnati, a loss at home to perhaps the most average New England team Bill Belichick has ever had, and a Thursday night loss to the Jacoby Brissett-led Cleveland Browns, Tomlin talked about, among other things, the need for a “steely resolve.”

The Steelers remain committed, Tomlin insisted, to rolling up their sleeves and smiling in the face of adversity.

Alas, there’s plenty of that to go around.

Enough that Sunday’s hosting of the Jets ought to be perceived as quarterback Mitch Trubisky’s last stand.

Win that one and the Steelers can continue to believe it’ll all work out somehow in the end if they just keep the faith and stay the course.

Lose it and it’ll be time to acknowledge the obvious, that the course is headed for a dead end, a cliff, or that dreaded fake tunnel in the mountainside that always seemed to get the best of Wile E. Coyote.

Given the so far consistent ineptitude of the offense and the holes that have begun to spring up on defense, a serious re-evaluation of expectations and objectives would be in order at 1-3.

Because the Steelers aren’t coming back from that, not with games against Buffalo, Tampa Bay, Miami and Philadelphia, three of which will be played on the road, looming after the Jets leave town.

It’s not all been Trubisky’s fault, but he has to wear the results, as all quarterbacks ultimately must.

And if the results are such that the season is shot in advance of Columbus Day, or before Election Day, there’s no sense prolonging the agony.

Tomlin may not be interested in blinking or blowing in the wind.

But a switch to No. 1 pick Kenny Pickett at quarterback when the season’s outcome appears inevitable would be neither one of those things.

It wouldn’t save a season that might not be salvageable even if Trubisky begins to make the plays we initially anticipated from his arm and his legs with something resembling regularity.

But it would jump-start the Steelers’ readiness for next season.

And that should be their focus the moment this season goes up in smoke.

That’s never been the Steelers’ way, but they may have no choice, sooner or later, but to throw in their Terrible Towels on 2022 and begin building toward 2023.

But they started their clock on an eventual resurrection when they decided to play rookie first-round quarterback Zach Wilson a season ago.

Second-year head coach Robert Saleh understood what they were doing then and why, and detailed the cost and effect of such an investment this week.

“The pros are you’re kinda molding a young man and you’re seeing him grow from the beginning, right?” Saleh explained. “That’s always fun, to be able to be on the front end of when a young man is trying to figure out who he is in this league. Obviously, any rookie, whether it’s quarterback or O-lineman, you’re gonna have some rookie moments and it’s gonna be hard.

It would take an awfully hard swallow for the Steelers to recalibrate expectations and turn to Pickett.

But it would be negligent if not delusional not to once it becomes apparent remaining determined just isn’t going to be enough.