Find out how Pittsburgh couples are incorporating national trends reported by a survey of 25,000 couples nationwide. 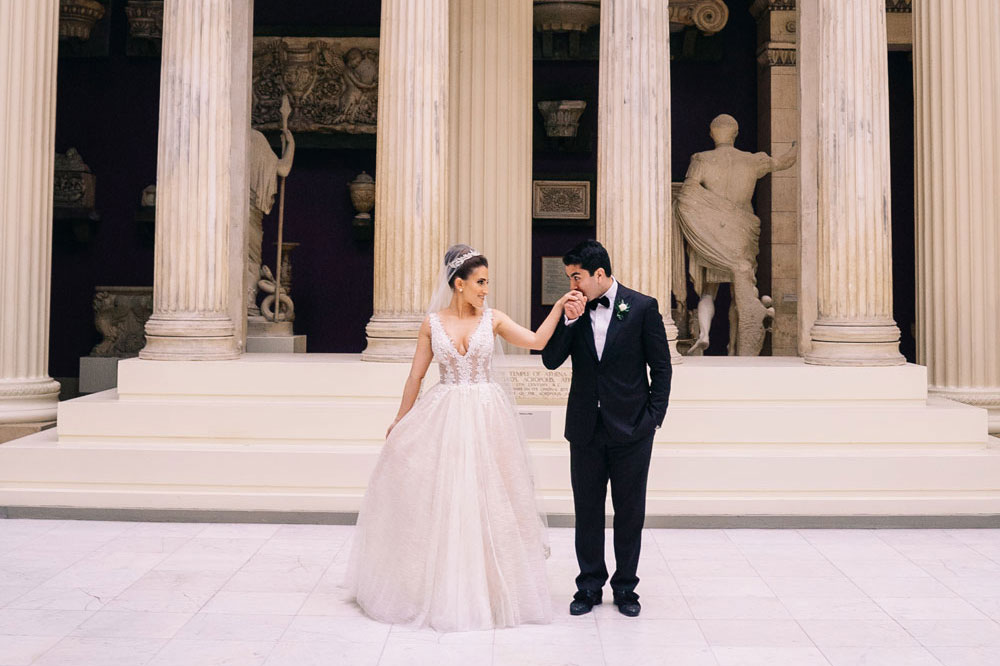 The Knot has revealed its 13th annual Real Weddings Study, based on more than 25,000 couples nationwide.

Both nationally and locally, the wedding industry evolved “to focus on intentional personalization, as to-be-weds use their celebrations to make a positive impact while showcasing their cultures, values, and unique lifestyles,” the study states.

The study also lists the top 10 most and least expensive states for weddings each year. This year, Pennsylvania comes in as the 10th most expensive with an average cost of $35,900 for ceremony, reception and engagement ring costs.

“This is mainly due to the average wedding spend in the state’s two largest cities, Philadelphia and Pittsburgh. The total Pittsburgh wedding cost [is] $32,300,” says Kirsten Francis, associate director of global insights at The Knot, a wedding planning and registry resource.

Based on last year’s trends, we break down what you can expect to see across the spectrum for 2020. 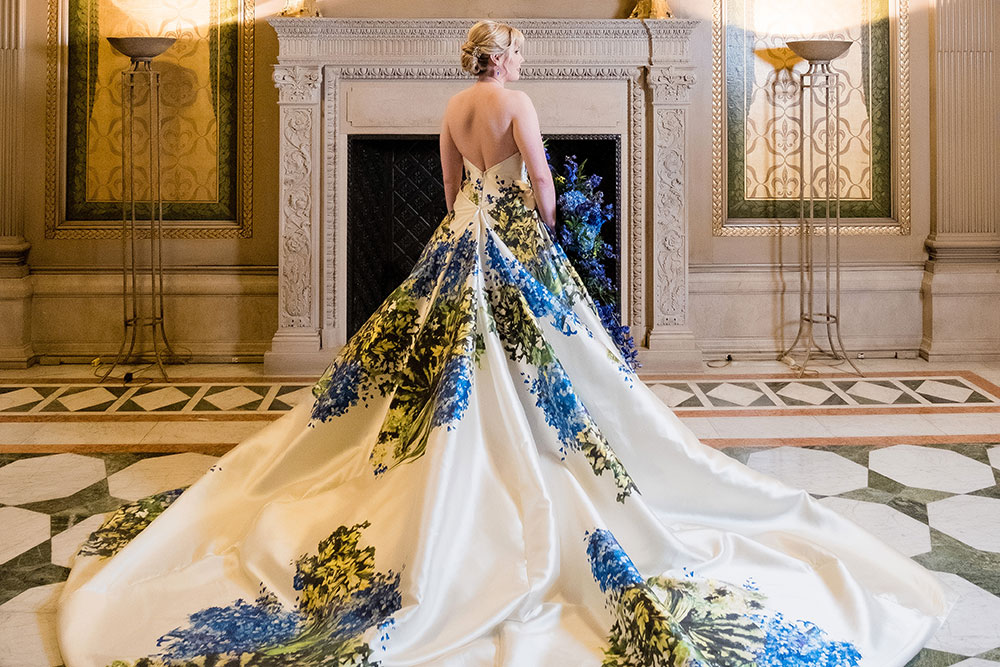 Soon-to-be-wed couples are using their wedding day look, or looks, to highlight their personality and individual stories. More than a third of couples incorporated passed down or borrowed fashion details from their family or friends (38%), and 9% included details of special meaning — cultural or religious significance or colors with personal ties to a loved one.

Katy Titus and husband Philip Swart tied the knot on Sept. 7 at the Carnegie Museum of Art. Katy was amongst the 9% when she walked down the aisle in a white dress with blue and green hydrangeas as a nod to her grandfather, who could often be found in the garden and had many hydrangea bushes in his yard, who passed before her big day.

Nationally, 22% of couples have multiple wedding day looks and make a fashion change at some point during their reception. Amanda Vogel, who married Thomas Grant on July 6 at Heinz Memorial Chapel, changed from a white, long-sleeve elegant dress into a sleeveless, white romper partway through the couple’s celebration. 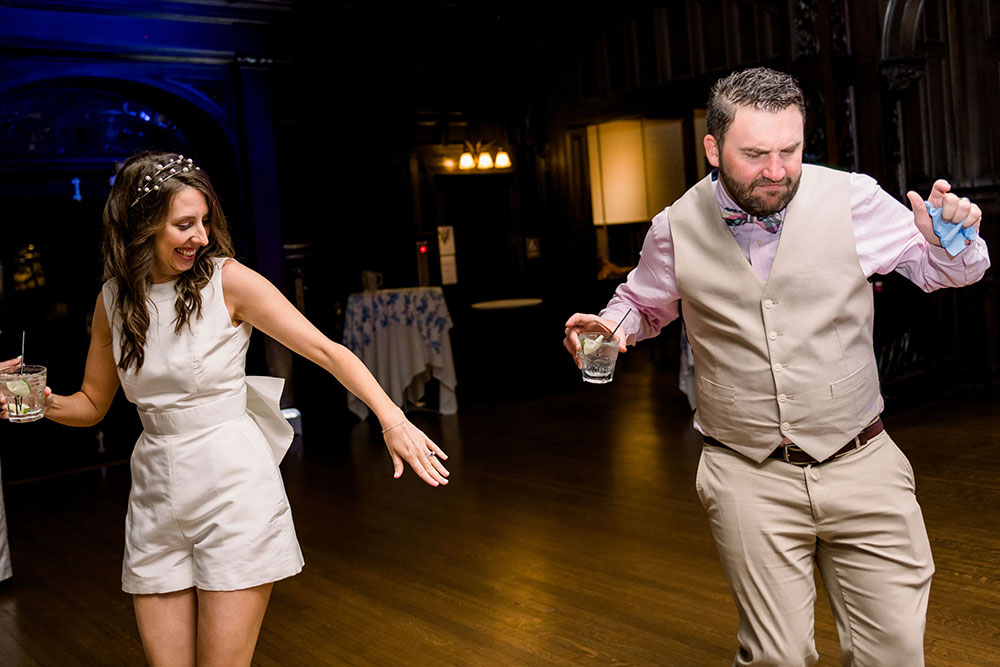 “Some outfit changes are minimal, such as removing the overskirt of lace bolero, changing from heels to flats, adding a leather jean jacket or taking down their up-dos,” says Jessica Transue, a local wedding planner. “More dramatic changes have included a second dress — something more modest for the ceremony and a more form-fitting party dress for the reception.” 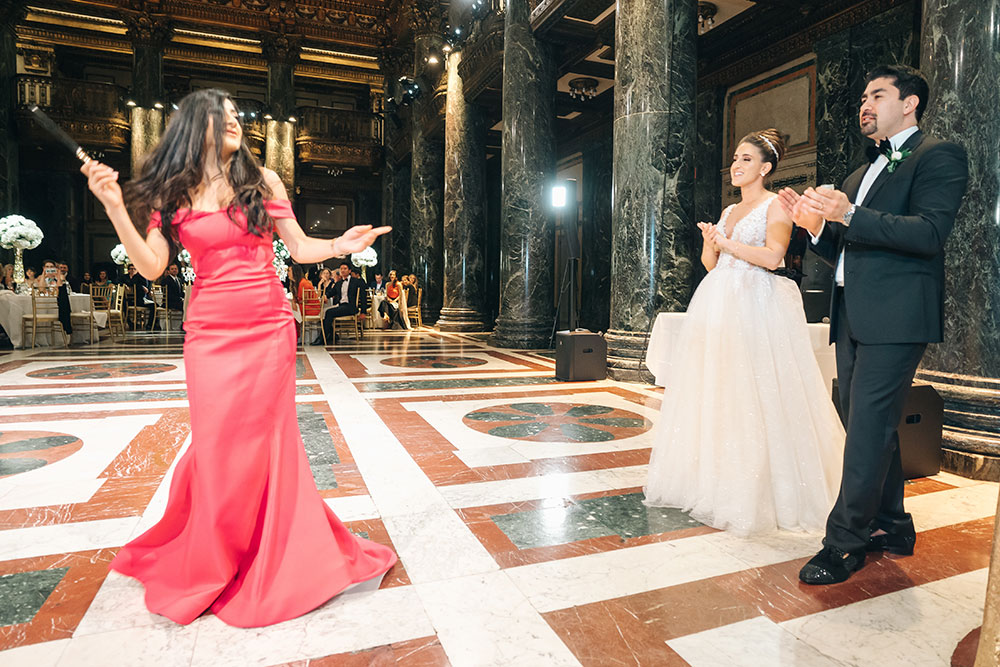 According to the study, more and more weddings are finding ways to combine a variety of cultural and religious backgrounds. Fifty-one percent of newlywed couples in the study came from two different backgrounds, which gave them the opportunity to make new traditions of their own. Some couples even host multiple ceremonies to honor different religions (4%).

“There are so many ways to tie in cultural and family traditions,” says Transue. “Incorporating a family recipe, including a specialty dance or passing down bridal gowns, rings, etc. I’ve seen some [Pittsburgh] couples host two separate receptions based on their religious backgrounds as well.”

Katy Rosen and Amir Chalak held two ceremonies, one in Pittsburgh on May 11 at Heinz Memorial Chapel for Katy’s Catholic upbringing and a Muslim wedding one month prior in California to honor Amir’s background. At their reception in the Carnegie Music Hall foyer, the couple participated in a Persian knife dance prior to cutting their cake as a nod to Amir’s Iranian-American heritage. 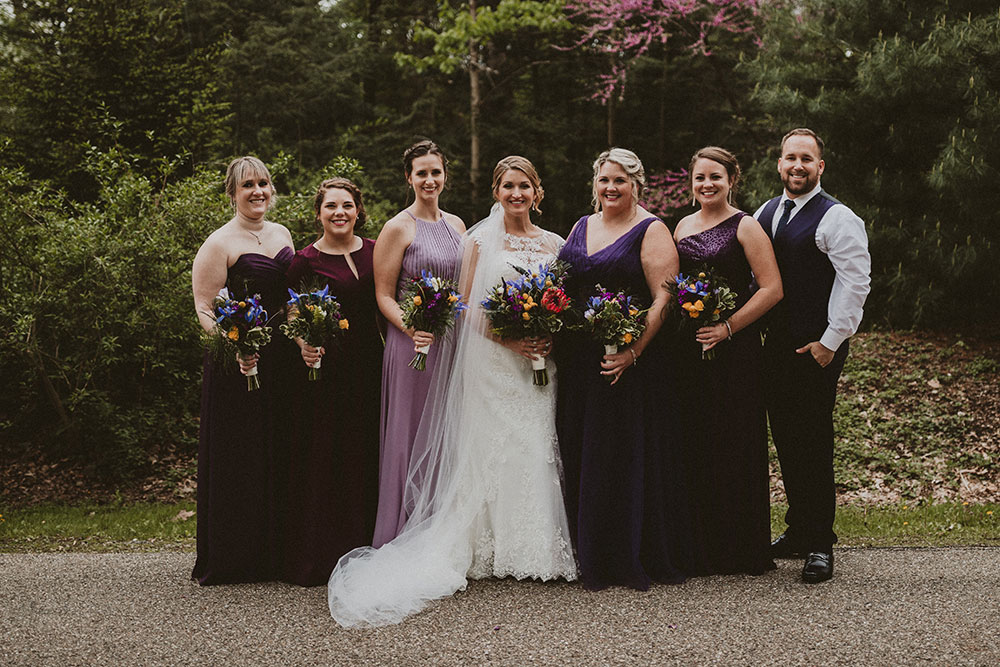 It used to be that wedding parties were primarily male on the groom’s side and female on the bride’s. However, according to the study, roughly 4 out of 10 couples, 37%, have had co-ed wedding parties standing next to them at the altar.

Wedding parties have also become more open to different ages, races and religions, leaving the space open for a grandmother to stand next to a childhood best friend or a brother to stand beside his sister.

“The majority of Pittsburgh bridal parties are same-sex for the bride and groom’s side, but I am starting to see more co-ed groups over the last few years,” says Transue.

Alexa Fitting and Bryan Heim, married on May 4 at Bradfordwoods Community Church, were one local couple with co-ed parties; Fitting had a male friend standing by her side at the front of the church with her female bridesmaids. 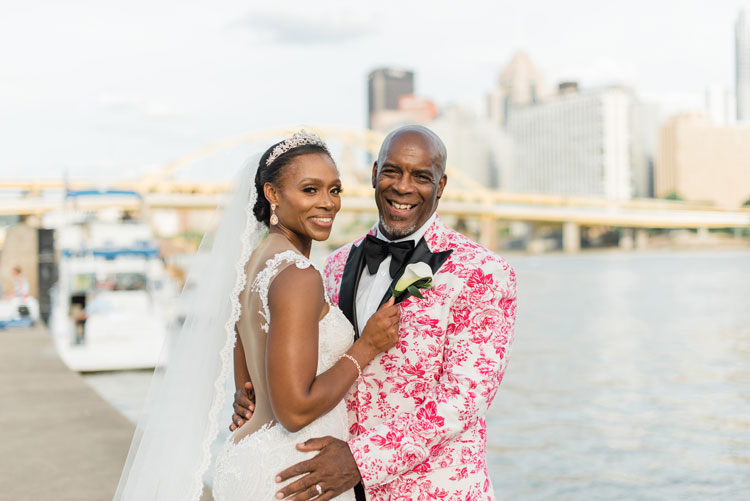 PHOTO BY SKY’S THE LIMIT PHOTOGRAPHY

Outside of the trends that The Knot’s study has revealed, there are plenty of Pittsburgh trends, according to Transue, to consider when planning a wedding.

“Venues close to the city have been more preferred and ceremonies at St. Paul’s and Heinz Chapel are extremely popular,” says Transue. “People are also incorporating late-night food options that are local favorites such as Primantis, pierogies, Pittsburgh popcorn and Mineo’s Pizza.”