The House That Lidia Built

Not far from the 16th Street Bridge, a woman with lots of heart and an expansive palate brings her northern Italian cuisine to Pittsburgh’s Strip District. 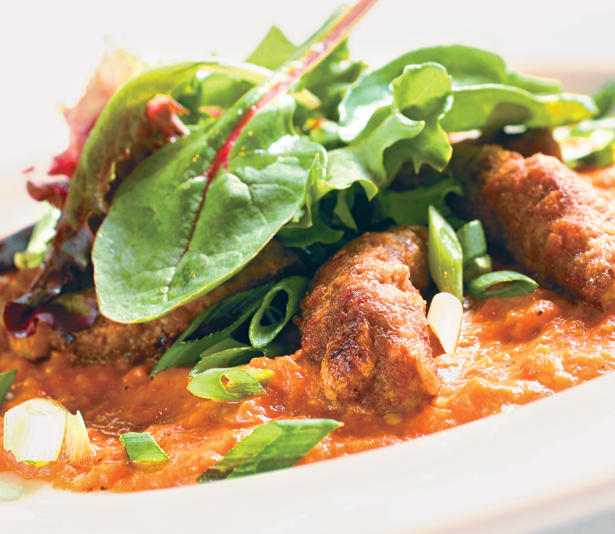 It was Friday evening at Lidia’s, and regulars were shoulder to shoulder at the bar, families around larger tables, laughter and uproarious conversation in abundance. I’m not the sort to be picky about my choice of seating arrangements. Along with my pithy husband, Brad, I agree that “they serve the same food at every seat.” But when it comes to Lidia’s, I gravitate to the oversized picture windows that exotically frame the bold yellow girders and iron intricacies of the 16th Street Bridge.

Why did Lidia Bastianich, who has four successful restaurants in New York and one in Kansas City, choose this Pittsburgh location? When I called to ask, she was cooking for Pope Benedict XVI, but took the time to return my call to say that it was her son Joseph who suggested she bring her brand of authentic northern Italian cuisine to “true America,” a market smaller than that of the big city yet culturally energized and growing. Not to mention chefs at Lidia’s can conveniently skip to and from the Strip District.

In a big way, Lidia’s departs from the prevailing idiom of the red-and-white checkered-tablecloth Italian eatery. The room is open, airy and unexpected, a mammoth space with handsome bones reworked by New York architect David Rockwell, whose aim was to capture the feel of an Italian farmhouse despite the enormous square footage. Rough-hewn pillars topped with stained-glass finials divide the central floor space like a row of vigilant sentries, preserving architectural openness while creating pockets of privacy. Two dazzling blown-glass chandeliers impersonate oversized, multicolored grappa bottles. An antique, upended red sleigh reflects Old World style while displaying Lidia’s cookbooks and a new line of pasta sauces.

Before I even dip into a wire basket with heavy-crusted Tuscan breads and rosemary sticks, complemented with ice-cream-sized scoops of cannellini and garbanzo-bean dips, servers dart around the floor with giant bowls of pasta, attacking my senses and subliminally narrowing my food choices before I even review the menu. There are no complex choices if you order the “bottomless” pasta trifecta. The night I was there, it was a light mushroom ravioli with thyme butter sauce, orecchiette with broccoli rabe and spicy homemade sausage, and long, flat papardelle with mushroom irradiate. All were perfectly straightforward, sauced sparingly, and had us nodding vigorously.

“Simple, straightforward, honest Italian food, seasonal and local is best,” says Bastianich, who is Italian, though born in Istria, now part of Croatia, a little border corridor occupied primarily by Yugoslavia after World War II. The mix of cultures and languages provided her with a large palate at a young age, and the influences translate with brines, krauts, tasty sausages and pickled things—even a tasty apple strudel.

“Once upon a time in America, ‘Italian’ meant a landslide of sauce over spaghetti noodles,” says executive chef Eric Wallace, a Pittsburgher from Pitcairn who grew up in his family’s pizzeria. He minds the kitchen with the kind of support that honors Lidia’s nomenclature and ethnic fidelity. Respect for ingredients is second-nature. “Food should be as simple as possible, uncomplicated to exploit flavors, something that feels comfortable,” says Wallace, who took over as executive chef in 2006. “Nobody ever says that the chef is in love with the food.”

Lidia places a high premium on family and the power of food. Her children are involved in the business, and she takes the chefs to Italy “to feel the energy…. Food is kind. Positive. You sit at the table, and there’s a connection. I love the sentiment of a family table…and I would love to use food for diplomacy,” she says wistfully.

I love the frico, delectable envelopes of montasio, a cow’s-milk cheese cooked on a flat top and stuffed with potatoes, leeks and onions, to which diners add seasonal combinations such as shrimp and asparagus or sausage and Swiss chard. Likewise, the popular fritto misto is light and crispy: The calamari, plump baby shrimp, skinny slices of pickled red onion and asparagus spears are battered oh so lightly, tempura-style, in rice flour with a shot of soda water. The accompanying marinara sauce, made entirely with San Marzano tomatoes broken by hand and seasoned with basil and garlic to delightful effect—like all of Lidia’s sauces—is awesome. It’s an ethereal treat.

Take a deep breath. Servings are hearty, and it’s easy to fill up on the smattering of goodies that come before the main event. Minding the food pyramid’s equilibrium, a simple salad of red and yellow beets, thinly sliced tart red apples and finger-sized mounds of Goatsbeard Farm goat cheese splashed with red-wine vinegar is a refreshing example of simple ingredients prevailing. A lusty zuppa di pesce is perfectly cooked with more fresh seafood than soupy broth, resulting in nothing to muffle the ocean’s bounty. Onions, leeks and Sardinian couscous add to the mix.

Glossy, 4-by-4-inch house-made ravioli squares are filled with Wagyu beef cheeks—a cut of meat the chef points to as a northern Italian peasant’s approach—that is, making use of an underappreciated but hugely flavorful cut of meat. A rosemary-infused sauce is half of the reason for getting the ravioli, which are spare but heavenly, baked to a splotchy golden brown. Hand-rolled potato gnocchi (literally, “little lumps”) are fluffy, delicate and light in the mouth with slow-simmered duck and grated Grana Padano cheese; they provide a way of honoring meat-and-potatoes’ roots and transcending them at the same time.

And I recommend exploring manicotti with fresh ricotta—yes, fresh ricotta, and Atlantic salmone alla griglia, a medium-rare fillet grilled with braised radishes and accented with a deep, compelling mustard sauce. A domestic lamb shank, Heritage pork and a 20-ounce rib-eye all receive winning remarks, but I’ll save them for a day when the flames are blazing within the floor-to-ceiling slate fireplace.

Can I eat another thing? What could be more delicious than picking a homemade cookie from a tray? It’s not something you find often in a restaurant, but biscotti misti is a delightful touch after a big meal. Pastry chef David Wodzinski picks up the tune with his homemade desserts. Either exert fortitude or succumb to an opulent sweet tooth, in which case I suggest affogato di caffe. This housemade vanilla ice cream “drowned” in espresso with a cantucci (a classic dunking cookie) or the torta gianduja, a luscious chocolate hazelnut torta with chocolate ice cream, turned out to be so amazing we conjured a polite plan to finagle an extra scoop. Then we chickened out.