It’s an unassuming yet intriguing space: A large, simple garage; white walls; brightly lit. But it’s your perspective on what fills that space that counts: Have you walked into a junk storage room, or have you ascended into geek heaven?

This is the headquarters of HackPittsburgh, located on Fifth Avenue just past the Birmingham Bridge, described on its website as “a non-profit, community-based workshop that allows members to come together and share skills and tools to pursue creative projects.” The ingredients to its creative projects include computers, wireless routers, modems, chips (not the eating kind, though those are here, too), old, donated scientific instruments and electronics kits of every sort. 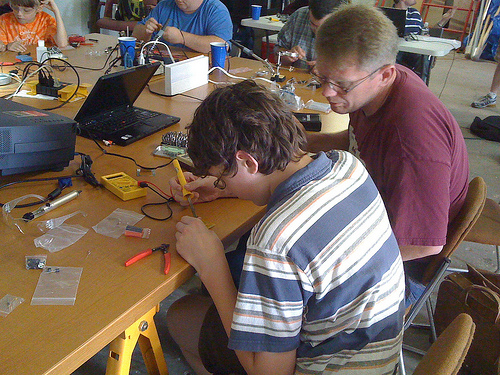 Matt Stultz, one of those who founded HackPittsburgh in March 2009, says the members include scientists and engineers, hobbyists, families, roboteers and arts-and-crafts enthusiasts. “There’s lot of fun and joking here. It’s all about the collaboration and the creating, exploring the possibilities,” Stultz says, emphasizing the social aspect of HackPittsburgh as well as the science and creativity.

But wait. Aren’t hackers bad guys? The term “hacker” has received a bad reputation from those who use their skills for evil to write malicious software code. HackPittsburgh specifies that it’s a “benevolent group” and that “the term ’hacking’ is used in a benign sense.”

One look at the projects in the HackPittsburgh workshop bears that out, with collaborations on making 3-D printers, a jukebox that can be controlled off-site, engravers, cigar-box guitars and a connection between a scrolling electronic sign and a router that lets members change the readout online.

Although it’s a member-based organization, HackPittsburgh opens its doors to the public each Friday evening. Sometimes these events feature speakers or presentations, but some of the most popular have been group projects. The members have helped visitors make ice cream using liquid nitrogen (from ice-cream mix to cold, creamy goodness in 90 seconds!), to “seed bombs” (compact clusters of wildflower seeds and compost to fill backyards or vacant lots with flora).

Other big events include music nights and craft nights, where there’s some extreme knitting, or you might find people making homemade microwavable heating pads or turning old magazine into bowls. Even when there’s no planned activity, the workshop is open and members help visitors on projects they choose.

As Stulz says, “We’re the geeks who don’t want to be isolated. We share this common interest, and here everyone’s encouraging. Everything’s possible.”

This article appears in the June 2010 issue of Pittsburgh Magazine.