Within the last few years, a few local golf courses and country clubs closed, partly because of the recession. More will likely go under in the future. That leaves communities to figure out what should happen next. 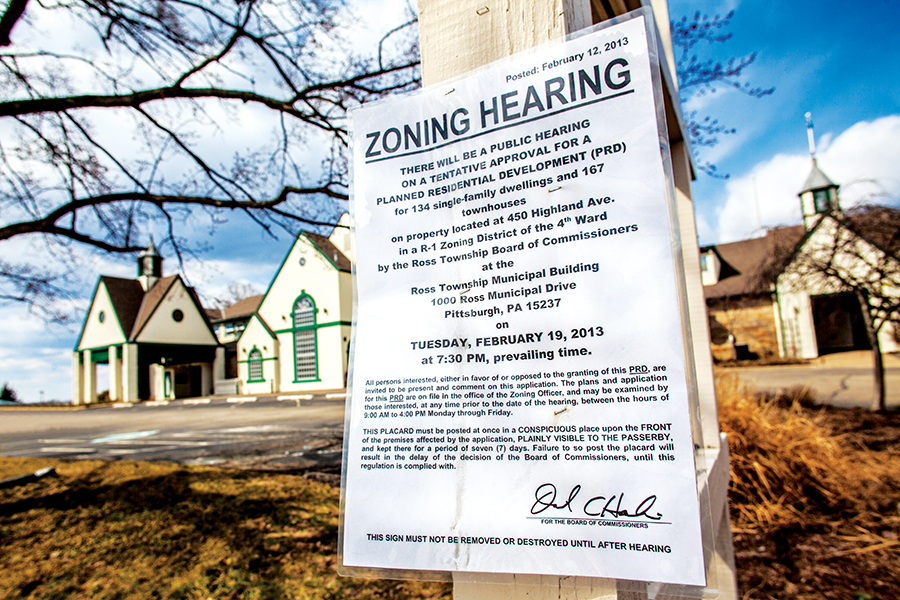 The rolling green hills between I-279 and Rt. 19 in Ross Township contain a parcel of land rich in history. Once owned by William Penn himself, the 120 acres became the Highland Country Club in 1920. Highland’s centerpiece was a challenging golf course designed by Emil Loeffler, one of the men responsible for the internationally acclaimed Oakmont Country Club.

Today, the course is overgrown and abandoned. The clubhouse — a portion of which dates to 1792 — is deserted. After 90-plus years of operation, Highland Country Club closed in 2011 amid financial ruin.

Coyotes were spotted in the area last year. Neighbors speculated that the scavengers were prowling the club’s desolate fairways.

Highland’s course ran right up against the road in several well-trafficked spots. Today, that affords passing drivers a view of the sad state of the place; as you see overgrown greens and weeds poking through sand traps, it’s easy to wonder, What happened here?

But the real question is even harder to answer: What happens next?

What do you do when hundreds of acres of property, often surrounded by homes and businesses, are suddenly abandoned?

Around here, most of the top clubs are still in good shape,” says Gerry Dulac, who covers golf and football for the Pittsburgh Post-Gazette, and hosts “The Golf Show” weekly on ESPN 970 AM. “But the older clubs … you had a lot of private clubs with a membership that, like everything else around here, got older.

“And in some cases, younger members, who really sustain a club, left for newer courses like Diamond Run or Nevillewood,” he adds. “Highland — which was never a great golf course, but it was in a populated area — slowly deteriorated. Look at Churchill Valley; it was once the grand club in western Pennsylvania, right behind Oakmont and a few others. Now, it’s closed.” Churchill Valley, located in Blackridge, went into receivership in January; the club is currently looking for a buyer.

The reasons for the downturn in the golf-course business are complex (but the recession is obviously a big one). In some parts of the country, ornate new clubs began construction, never to be completed. While a limited number of clubs have closed locally, the region’s robust golf heritage coupled with a slowdown in construction around the turn of the century combined to prevent widespread disaster in the industry.

“We’re not as volatile as some of the other markets I’m familiar with,” says Jeff Rivard, executive director of the Western Pennsylvania Golf Association. “But the private clubs are down about 15 to 20 percent in the past decade — though [most] have been able to adjust to that.”

A troubled club, he says, will “try to stay private as long as [it] can. Then they’ll probably try to do season passes and see if they can get a few new members.” Initiation fees — once a staple of country-club profits — have all but disappeared, Rivard says.

If more alluring deals and fewer hurdles to membership can’t right the ship, though, a private club will often turn public. “We’ve had between 10 and 15 [member clubs] do that,” Rivard says. “Out of those, there are three or four that have closed their doors entirely.”

Rivard and Dulac believe that, while they won’t name specific clubs, at least another handful will close in the near future. And with every one of those shuttered courses, the question becomes: What do you do when hundreds of acres of property, often surrounded by homes and businesses, are suddenly abandoned?

In many cases, housing is the first answer for developers. A former golf course offers an open piece of property with ready-made access points and, usually, proximity to an existing community; as soon as it becomes clear that a club has seen its final tee time, those looking to build normally come calling.

When Highland Country Club suspended operations in late 2011, the property’s outlook was unusually muddy. It had been owned by about 70 equity members; in 2009, that group sold to an outfit called J&J Holdings. Almost immediately, legal troubles overtook the new owners: One partner, Jeffrey Garbinski, was eventually convicted with failure to make required disposition of funds, stemming from the sale. Those debts were added to the claims of former members who bought longterm memberships only to have the course close.

Still, real-estate developer Dan Caste and Heartland Homes president Marty Gillespie (under the name Limerick Land Partners) believed that Highland could eventually give way to a thriving neighborhood. They acquired ownership interest in the property, as well as the liabilities of now-defunct J&J Holdings, in early 2012 and later announced a plan to build 134 single-family homes and 167 townhouses, according to reports published in other news outlets. While the group was quick to state its intention — find a way to repay creditors, through further development — it declined to be interviewed.

The idea was met with something less than uniform enthusiasm by neighbors and the community, however. Ross Township planning commissioners initially voted against recommending tentative approval for the Limerick Land Partners plan — a non-binding decision — pending changes and detailed traffic studies, according to Aol/Patch.com; at several subsequent meetings (including the last one before press time), the discussion was repeatedly delayed.

Thomas Schutzman resides within a mile of the former club (and has attended meetings), and has relatives who live even closer.

“If they cut down on the number of homes [they intend to build], that’d be fine,” he says. “The high concentration of townhouses is an issue.”

Schutzman isn’t optimistic about major changes to the plan being accepted, however.

“I think the development is going to go through [as they’ve pitched it] — I don’t think they’re going to make any changes.”

Even with an optimistic group of developers in place — and more than 18 months after the final round of golf was played on the historic course — Highland’s future is unclear.

There are other ways to get value out of land than simply by building homes and office parks. And while a more far-sighted approach may not be viable in some cases — particularly if there are debts left to settle — a community could benefit from keeping abandoned greens, well, green.

Greg Nace, president of the Pittsburgh Botanic Garden, has helped that organization turn 460 acres of what was forsaken mining land into a public asset that’s growing rapidly. In his view, the sudden gift of a designed and open space shouldn’t necessarily be immediately packed with new construction.

“It seems like it would be a perfect opportunity for a development that has more of a green presence,” he says. “I’m thinking of some open space that would allow access to walking paths or ponds — places for the community to get outside. There’s a lot to be said for that,” even as a complement to more traditional construction.

Adding a limited number of homes to a carefully curated and preserved green space could, potentially, draw in buyers looking for a unique place to live, Nace says. “A lot of professionals moving into the area want an urban environment, but want the natural setting, too.”

Nace is skeptical about the prospects of such a plan, though: “I don’t foresee a big place like [a former golf course] becoming available and the community saying, ‘Let’s turn it into a park.’ That doesn’t seem realistic in today’s atmosphere; that thinking is not around as much anymore.” 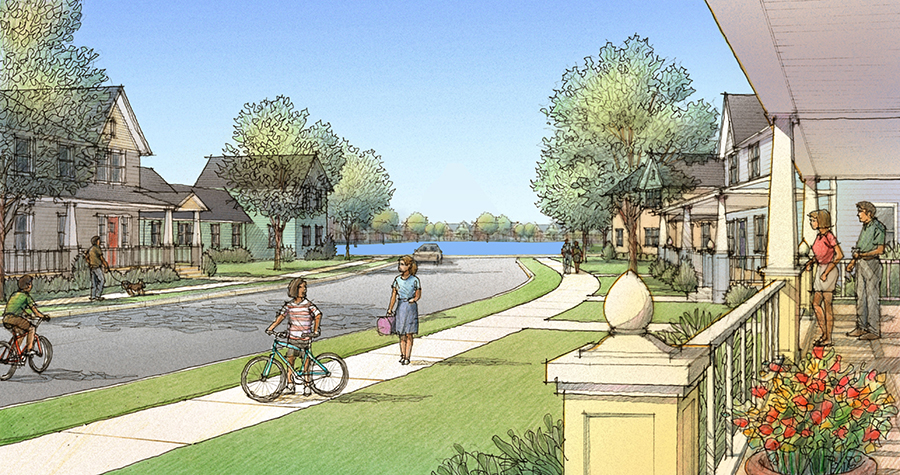 Careful development on the site of the former Venango Trail Golf Club (and its two natural lakes) is leading to a new community, illustrated above, that’s alluring — and eco-friendly.

Perhaps, though, the middle ground is realistic. Maybe nature can be preserved alongside growth — and if there are no traffic-addled neighbors, no bad debts and a market that could actually use some more houses, an ideal solution can arise.

The Venango Trail Golf Club, a public course in Marshall Township, closed in 2006. Today, construction is under way on Venango Trails, a diverse and environmentally friendly development that will eventually host more than 470 homes on 350-plus acres.

The development, nestled a few miles off of the main drag of Rt. 19 through Cranberry Township, is far from a cookie-cutter network of prefab McMansions. With prices ranging from around $230,000 for townhouses to million-dollar-plus estates, variety is immediately visible; thanks to custom designs from a quartet of builders (Heartland Homes; S&A Homes; Brennan Builders, Inc.; and Paragon Builders), Venango has the feel of an organic neighborhood.

“The last thing we want to be is one of those communities where the model repeats in every third home,” says Rich Barent, Venango’s sales director. “We have multiple builders and several different styles of home, so everything looks different.”

And unlike Highland Country Club, or other properties where ownership shuffled, Venango Trails has never been sold — the current development group, VT Partners, is made up of former owners of the golf course.

“We’re invested. We live here. And there were a lot of options for a tract of land this big,” says Adam Randall, a representative of VT Partners. “We wanted to make sure it was a great community and a great development for the area.”

It’s a unique case — rather than bail out when the going got tough, the VT Partners group has actually shepherded its land from one use to the next. And it’s done so with an eye toward sustainability and the continuing health of the area; every home built here will exceed Energy Star requirements, with tankless water heaters, high-efficiency furnaces and a laundry list of other green touches. According to the Home Energy Rating System, which gives a standardized score to new construction against an average new home, all of Venango’s houses will perform at least 35 percent better than current requirements.

That stewardship goes beyond the front doors of Venango Trails, too. Besides leaving 179 acres (including the course’s two natural lakes) preserved as open space (as opposed to 149 acres to be developed), the group took a strong stand to permanently protect some serious western Pennsylvania heritage. Early in the community’s development, VT Partners turned over 88 acres to the Allegheny Land Trust — including a section of the historic trail, which was once used by Native-American tribes as a route from the confluence of the three rivers to Lake Erie. That land will be held by the trust in perpetuity and can never be developed.

While the property is still in an early stage of construction, more than a dozen homes will be occupied by the end of this year. Filling new abodes shouldn’t be a challenge; the area is still growing rapidly, and housing within the bounds of North Allegheny School District is normally coveted. “It’ll be a real community, with sidewalks and front porches tying people together,” Randall says.

He isn’t just a skilled hype man for Venango Trails — when Randall speaks about the development, he’s talking about his own future. He’ll be moving there in a matter of months, as one of the community’s first residents. When he looks over land he’s known since childhood, he reflects on the transition: “Sometimes, through change and evolution, you can turn everything into a real positive.”

At Venango Trails, that’s certainly the case. Unfortunately, not every hard-luck golf course has forward-thinking owners ready and willing to evolve. Whether such an optimistic statement will hold true for the Highland and Churchill Valley clubs — or for the next club that can’t weather the storm — remains to be seen.

This article appears in the May 2013 issue of Pittsburgh Magazine.
Categories: Community Feature, From the Magazine