'The Comet and the Tornado'

'The Comet and the Tornado' is Donald Marinelli's personal memoir, cataloguing his nearly 30 years spent working in CMU's drama department. But more than that, it is his attempt to reflect on the time he spent working side-by-side with the late Randy Pausch.

In 2007, Randy Pausch, a computer-science professor at Carnegie Mellon University, gave a talk aptly titled "The Last Lecture" to a group of CMU students, faculty and friends. Thanks to the timeliness of the lecture (Pausch died of pancreatic cancer less than one year later) and the viral nature of the Internet, Pausch went from professor to international inspiration overnight.

For six years preceding this moment, Donald Marinelli, a professor of drama, shared an office with Pausch, and together they co-founded the university’s Entertainment Technology Center (ETC). They also shared a vision "in making the [center] bridge the gap between art and technology, academia and industry, and help students realize their entrepreneurial dreams and aspirations." 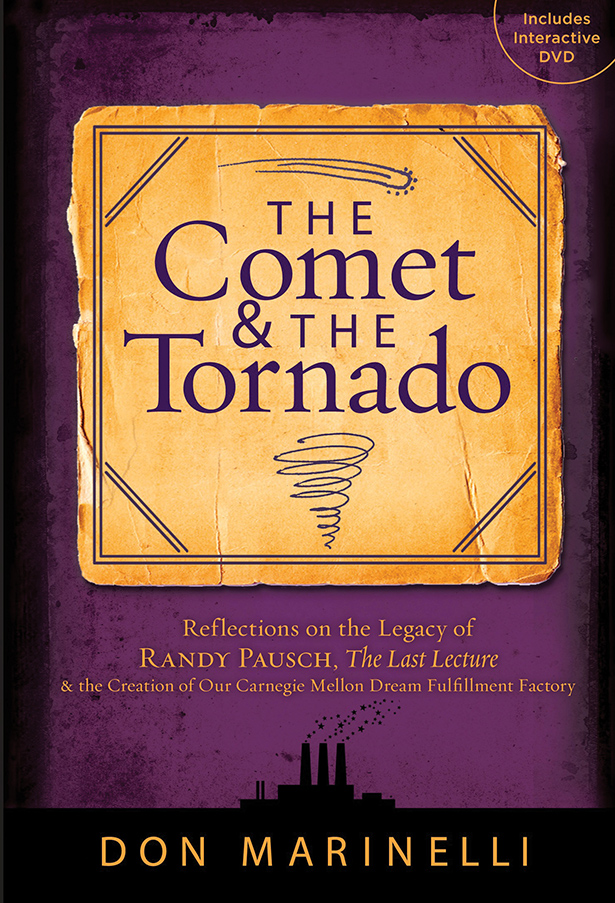 Marinelli and Pausch were the veritable odd couple-the left-brained, logical, analytical computer scientist (Pausch) and the right-brained, creative, intuitive head of the drama department (Marinelli)-and were the yin to the other’s yang. Though they often clashed professionally, during their time working together, they became very close friends.

In Pausch’s "Last Lecture," he referred to Marinelli as "The Tornado," a whirlwind of energy and creativity. To Marinelli, Pausch was a comet because (as he describes in his new book) he "burst upon the scene like an astral body … illuminating his secrets for living life to the fullest for millions of folks who needed such guidance. … Comet Pausch left millions of people stunned, amazed, happy, giddy and seeing light where there had been only darkness … before this amazingly beautiful comet hustled off into the universe."

The Comet and the Tornado: Reflections on the Legacy of Randy Pausch, The Last Lecture & the Creation of Our Carnegie Mellon Dream Fulfillment Factory is Marinelli’s personal memoir, cataloguing his nearly 30 years spent working in CMU’s drama department. But more than that, it is his attempt to recall, remember, reflect upon and, at times, reconcile the years he spent working side by side with Pausch—an experience that would help shape the rest of his life.

With Pausch’s instant Internet fame, millions of viewers found strength in his message, but few actually know anything about the man himself. The Comet and the Tornado is a touching account and does an excellent job of humanizing the man behind the myth, providing readers with personal insight and observations from one of Pausch’s closest friends and colleagues.

As a bonus, the book comes with a DVD that contains a "synthetic interview with Marinelli, which allows [readers] to ‘ask’ the author more than 220 questions related to material referenced in the book."

The Comet and the Tornado: Reflections on the Legacy of Randy Pausch, The Last Lecture & the Creation of Our Carnegie Mellon Dream Fulfillment Factory by Donald Marinelli; Sterling; $19.95.

This article appears in the September 2010 issue of Pittsburgh Magazine.
Categories: Arts & Entertainment, Things To Do