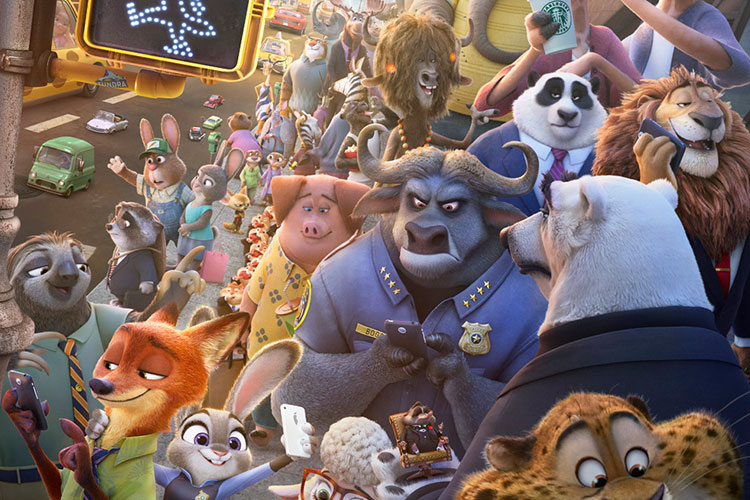 After more than a decade spent lagging behind its sister studio, Pixar, Disney Animation Studios has reclaimed its status as a reliable producer of enjoyable cartoon fare. What’s more, recent hits from Disney — “Wreck-It Ralph,” “Frozen” and “Big Hero 6” — join the ranks of Pixar’s finest as films nearly as entertaining to adult audiences as they are for younger viewers.

The latest, “Zootopia,” continues that trend. We are deposited into a world devoid of humans; instead, animals have retained their familiar forms but evolved into walking, talking, buying and selling characters, living (mostly) in peace and harmony. Our protagonist, Judy Hopps (voice of Ginnifer Goodwin), is a rabbit who grew up on a small-town farm — mostly carrots, of course — determined to become the big city of Zootopia’s first bunny police officer.

Determination and pluck push her through the police academy at the top of her class, but she finds a frosty reception among the much larger fauna at Zootopia PD. Tasked with unraveling the case of a missing otter, she enlists the help of reluctant con man — sorry, con fox — Nick Wilde (Jason Bateman).

The mystery proves to run deeper than Hopps imagined, naturally, allowing “Zootopia” to get to the business at hand: a complex, remarkably timely parable about diversity, suspicion and inclusion. The metaphor gets muddy by the film’s conclusion, but in short, this is a film about our still-rampant tendency to suspect the societal other — with different species standing in for any number of human demographic distinctions — when grasping to explain cultural ills. It’s a direct attempt to get children to think about dilemmas that grown-ups are wrestling with daily, and it is to be commended for that.

And in any case, it’s awfully funny. A scene at the DMV (if you’ve avoided seeing it in the trailers or clips, I won’t spoil it) is an absolute delight, and plenty of jokes both physical and textual will land with the grown-ups in the crowd. (And try to spot all the “Frozen” references; I counted at least three.) If you’re a parent, “Zootopia” is a film you can look forward to seeing with the kids; if you’re not, you should think about buying a ticket anyway.

A bewildering dramedy also arrives in theaters this weekend. While I can’t call “Whiskey Tango Foxtrot” bad, I can certainly say it’s disappointing — largely because it is in no way the movie that it is advertised as. Billed as a sort of “Bridesmaids” in Kabul behind star Tina Fey, “Whiskey Tango Foxtrot” is rather a quiet career-crisis drama with a few laughs and a few explosions thrown in. Desperate for a change, low-level news writer Kim Baker (Fey) accepts a three-month assignment to Afghanistan; addicted to the rush of war reporting, she ends up staying for years. “Whiskey Tango Foxtrot” is mostly concerned with Baker’s personal struggles — career, relationships, self-image — and only vaguely interested in the war itself, though some time is spent contemplating the plight of U.S. soldiers in Afghanistan after the invasion of Iraq. There are jokes, but they are few and far between, and the narrative drive is dramatic. If the film were better, I suppose I could more easily overlook the disconnect between expectation and reality; unfortunately, it’s just not all that good. (It’s also tough to care about the career crisis of a rich American amidst all the scenes of death and destruction.) The cast — also including Margot Robbie, Martin Freeman, Billy Bob Thornton and Alfred Molina — is quite good, at least.

The Montage: I was unable to attend a screening of the action sequel “London Has Fallen,” also released today. It follows “Olympus Has Fallen,” one of two movies (the other was “White House Down”) released in the summer of 2013 that depicted a terror attack on the White House; one of the two was OK, but I honestly cannot remember which it was. Despite a decent cast — Gerard Butler, Aaron Eckhart, Morgan Freeman, Angela Bassett and more — early reviews have not been good … I’m trying to find as much time as possible to devote to Row House Cinema's “Cult of John Carpenter” week, beginning today. Four of the director’s best will rotate for the next seven days, each of which are more than worth your time. The selections: “The Thing,” “Escape from New York,” “They Live” and “Big Trouble in Little China” … Inexplicably, there’s a remake of the 2002 gross-out flick “Cabin Fever,” and it's produced by Eli Roth, the director of the original. This exercise in futility has been universally derided, but for the masochistic, it’s playing once and only once at Dormont’s Hollywood Theater. Tickets are here … If you missed the late David Bowie’s performance in the fantasy oddity “Labyrinth” at Row House last month, it’s playing Wednesday night at AMC Loews Waterfront 22. Info here.