Grab your kits, scarfs and get ready to watch the Euro 2016 Pittsburgh-style. We'll show you where to go to get your fan on.

Next to the FIFA World Cup, there is no larger soccer event in the world than the UEFA European Championship. It’s a battle among the top countries in Europe: Can Spain — La Furia Roja — defend their 2012 title? Will defending 2014 World Cup champions Germany continue to dominate world futbol? Or will a Christiano Ronaldo-led Portugal finally reach their potential?

Yet, for most Americans the Euro 2016 is an afterthought. Without the US Men’s National Team involvement, the soccer tournament will be off most sports fans’ radars.

For the exuberant soccer fans here in the states, however, the European takeover of ESPN will be welcomed with open arms, international kits and full pints in hand. Where can Pittsburgh hypers go to watch their favorite European nations battle it out in France? Pittsburgh Magazine has some ideas: 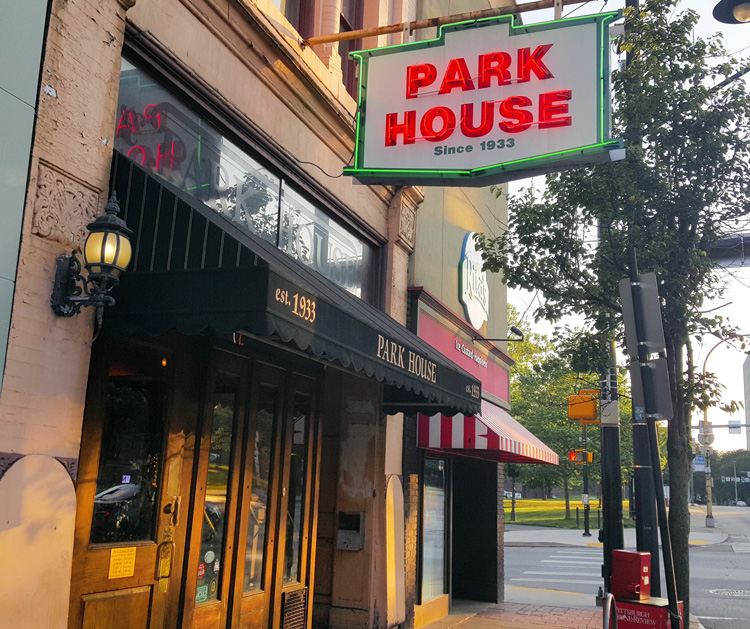 The Park House
This is a classic, straight-forward place to watch the world’s ‘beautiful game.’ Park House, owner Zamir Zahavi’s (locals know him as “Z”) might be upset with the absence of Le Orange, his beloved Netherlands in this tournament, but you can rest assured he’ll still have the 2016 Euro on both of their big screen TVs. The Park House fills ups during match time and its near  standing-room-only environment adds to the ambiance of a classic soccer bar. With fifteen draft beers and over fifty craft beer selections — including former Liverpool FC’s official sponsor, Carlsberg —  fans will be able to quench their thirst with traditional soccer brews. Plus, Z and his crew boast  some of the tastiest falafel in town. During the 2014 World Cup, the bar was packed to the brim with supporters chanting and cheering.

Best seat: Third bar stool to the left of the popcorn machine. This seat offers patrons a spot directly in front of one of the two TVs at Park House, not to mention easy access to both the free popcorn machine and the restrooms.
[403 E. Ohio St., East Allegheny; 412/224-227, parkhousepgh.com] 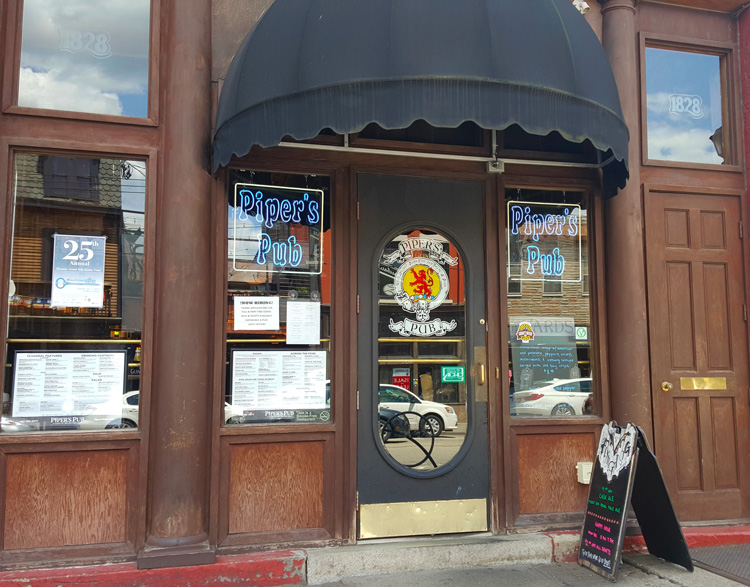 Piper’s Pub
If the trophies and soccer accolades atop the bar don’t give it away, come June Piper’s will be the place to be for the Euro 2016. Easily Pittsburgh’s most well-known soccer bar, Pipers boasts its own fantasy football league for patrons, and opens its doors at 7 a.m. for weekly English Premier League matches. The pub consistently is overflowing with soccer-crazed fans and the shoulder-rubbing only adds to match day intensity. Even with a reputation for being a safe house for fans of the Three Lions (England), Wales and Republic of Ireland, it is still a number one destination for all soccer fans. Their selection of imported drafts (19 on tap) and craft beers will make any fan smile. With whiskey and staff-selected beer flights, Piper’s offers every traveling supporter a surplus of drinking options to wash down each goal with. Their menu offers authentic Irish cuisine at reasonable prices —  the Scotch eggs and pot roast dip are sure to lift your game day spirits. The bar’s brass rail gives the pub a traditional 19th century look, which  adds to its eclectic feel. Pipers will be jam-packed throughout the tournament, most notably on June 16 for the England vs. Wales clash – this will be the place every fan should be.

Best seat: Far right corner high top before the main dining room. Fans will have a table in the corner to themselves and even when at capacity they’ll have easy access to all four the bar’s television sets.
[1828 E. Carson Street, Southside; 412/381-3977, piperspub.com] 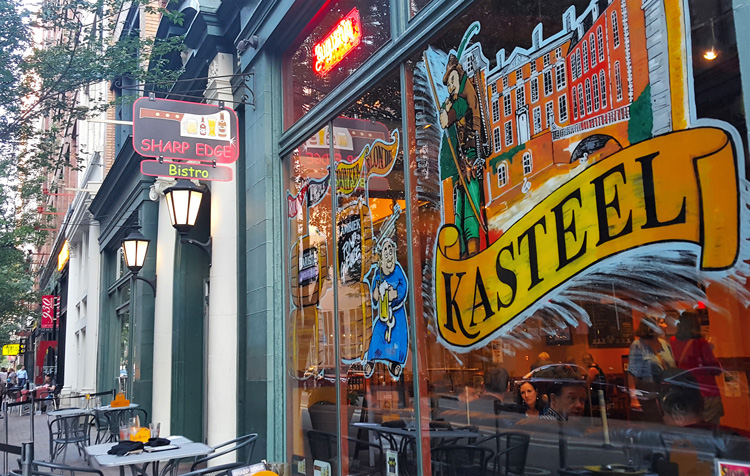 Sharp Edge Bistro
Situated in the heart of Downtown, Sharp Edge is a surprising destination for soccer fans. The Penn Avenue bistro boasts three flat screens, a 30-person bar and doesn’t have a bad seat in the house. A nice blend of casual fans and diehard kit and scarf wearing maniacs, Sharp Edge’s impressive selection of draft, crafts, cocktails and quick-eat menu items like their prosciutto panini offer fans a relaxed environment to enjoy the games. We recommend getting to the bar early though if you’d like to reserve a table or seat directly in front of one of the televisions, the bar does fill up quick come kickoff.

Best Seat:  Any of the four seats on the right corner of the bar. These quartet of chairs offers fans an intimate view with one of the two main TV’s at the bar along with a bit of breathing space between the main soccer crowd and the dining crowd. It is best of both worlds for hooligans and personal space.
[922 Penn Ave., Downtown; 412/338-2437, sharpedgebeer.com] 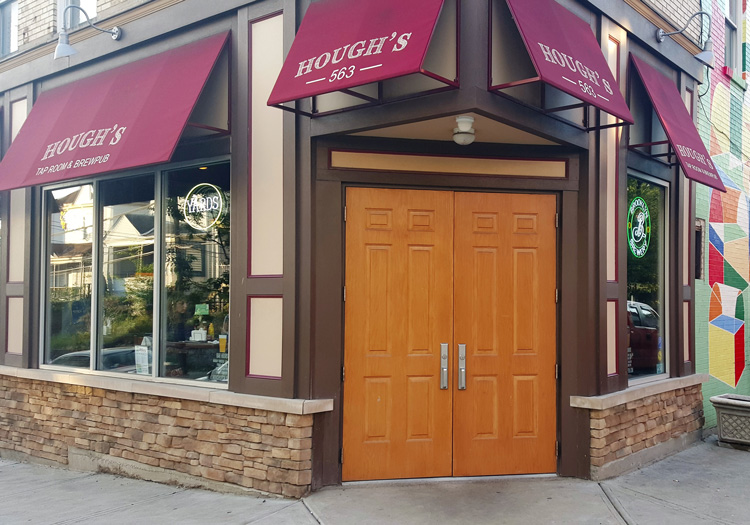 Hough’s Taproom & Brewpub
A sign reading “Enter as strangers, leave as friends” dangles over top the entrance to Hough’s and its unofficial motto may very well say it all. The taproom’s comfortable environment and cheerful staff make it an appealing destination for Euro 2016. Secluded behind the slopes of Oakland directly across the street from the acclaimed “Pittsburgh: Escape Room,” Hough’s Taproom offers an authentic soccer-watching experience in a non-traditional atmosphere. With an astounding beer selection Hough’s will immediately catch the attention of supporters of any nation playing for the Cup. An impressive arsenal of 73 rotating taps for their daily draft selection including a monthly draft feature from various microbreweries (Sweet Water Brewery will be featured in June and New Belgium Brewery in July). If their featured taps don’t fit your fancy, or you’re looking to dig into a more obscure collection, Hough’s has over 100 imported, domestic and craft bottles to choose from; neatly organized by nation and style — a commodity for new-drinkers. Hough’s near 30-seat bar offers a fantastic view of any one of the pubs six TVs. There’s an impressive menu of pub grub which includes sleeper hits such as vegetable chorizo. For halftime, refreshments fans would be wise to order up some of their decadent wings which are dosed in any combination of their 10 savory sauces (I recommend trying Mama’s Little Yella Pils (Saaz) hoppin’ honey sriracha). Hough’s may not have an acclaimed soccer bar reputation, but it has all the fixings of a perfect futbol bar.

Best seat: Left side of the bar, next to the taps. The seat offers you a front-row spot to both bar televisions and puts you directly in the heart of the action.
[563 Greenfield Ave., Greenfield; 412/586-5944, houghspgh.com] 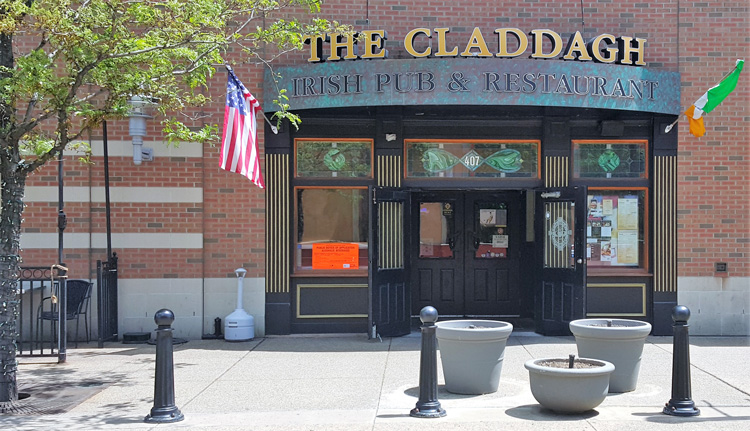 Claddagh Irish Pub
As soon as you step foot into Claddagh in the Waterworks Mall in Homestead, you’ll notice the traditional Irish pub décor; the black granite counter tops, the mahogany tables and bar stools and the Saint Patrick memorials painted across the wall. Needless to say it’s the perfect setting for fans of Norn Iron and the Boys in Green (Northern Ireland and the Republic of Ireland) come June 10. Claddagh’s whiskey flights are great for goal celebrating and its stock of 22 draft beers are dominated by the Emerald Isle with the likes of Smithwicks, Magners, Harp and Guinness. They have a few surprises with microbrews like Rouge and Southern Tier, but, don’t let the crafts fool you, this is still a no-nonsense Irish pub.While their menu boasts traditional Irish staples like beef and cabbage, fans looking to enjoy the game should aim for their appetizers specifically their Guinness beer cheese and pretzels combo, their Irish pub fries or the behemoth known as their Monte Cristo. All three are perfect for match-time munching. The outside seating is a nice touch for fans preferring a little breathing room. With four plasmas at the bar, a projection screen and televisions in every corner of the dining room, you won’t have trouble catching a match.

Best Seat: For fans looking for the ultimate Euro experience I suggest sitting at the back-left corner of the bar. You’ll have quick access to the bar, a television right in front of you and direct view to the restaurant's impressive projection screen.
[407 Cinema Drive, South Side; 412/238-4800, claddaghsirishpubs.com/pittsburgh] 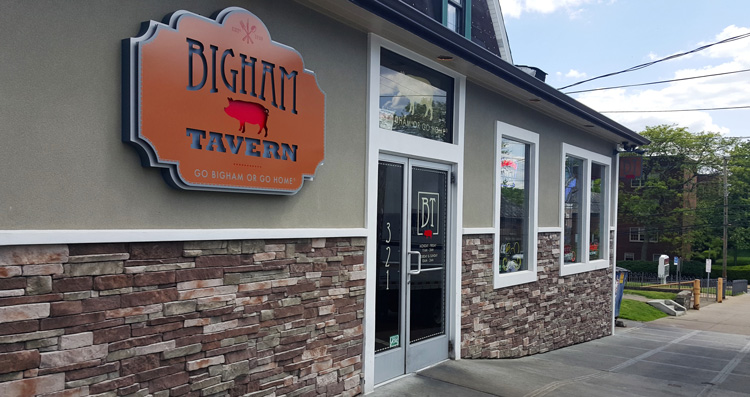 Bigham Tavern
With a slogan like “Go Bigham or go home,” it is hard not to get behind Mount Washington’s best-kept secret. A few blocks down from the Shiloh Street business corridor, Bingham was a favorite destination of mine for last summer’s Women’s World Cup. The bar’s plethora of television screens (19 flat screens and two HD projectors), outdoor patio and balanced craft/domestic selections make it a great game day hideaway. Bigham’s newly remodeled look offers fans a trifecta of seating options: A traditional spot at the bar, outside to their impressive patio where fans can hoot and holler to their hearts content or the mellow back dining room space that’s frequented by happy hour dart players. Similar to Hough’s Taproom and Sharp Edge Bistro, Bingham offers a great outlet for both casual fans and fanatics. Throw in Bingham’s Wednesday Wing Night and you have the perfect group-stage and first-round location. Bingham’s greatest attribute is its ability to offer impartial fans a multitude of ways to watch the games regardless of their allegiance.

Best Seat: Outside patio. The back right corner table offers a mildly secluded section for you and your mates. Nothing like fresh air, cold beer and world-class soccer.
[321 Bingham St., Mount Washington; 412/431-9313, binghamtavern.com]

Jack’s Bar
Jack’s is one of the few bars that is open at 7 a.m., and for Euro fans that’s a great thing. Jack’s offers a less-intense outlet for soccer fans than downstreet neighbor Piper’s Pub. Their no-thrills beverage selection is just want the doctor ordered for serious fans who prefer a quieter spot to watch their favorite team’s quest for gold. A split bar, with a twenty-two seat main bar offering mostly bottle and mixed drink service is a nice spot to sit-in on a group stage games. The bar back offers eight drafts and a better selection of higher end whiskey especially for those Jameson loving-fans. In addition, Jack’s $2 Tuesday for Yuengling and $2 Thursday for Iron City offer Yinzers a very American outlet for futbol watching. Why not start your day with a Boilermaker and catch 9 a.m. group stage clashes like Sweden vs. Italy on June 17?

Best Seat: Despite the amount of barstools in Jack’s the best seat might very well be standing. The ability to move around from both bars and their four televisions might be the best bet for soccer fans needing to avoid some bad mojo from the ever-changing crowd at Jack’s.
[1117 E. Carson St., Southside; 412/431-3644, jacksbarpittsburgh.com]

This article appears in the June 2016 issue of The Best Blog.
Categories: Best of the ‘Burgh