The Bengals Turned Things Around Quickly – Why Can’t The Steelers?

It seems the Steelers are a long way from earning a trip to the league championship, but this season the Bengals have reminded everyone how quickly the game can change. 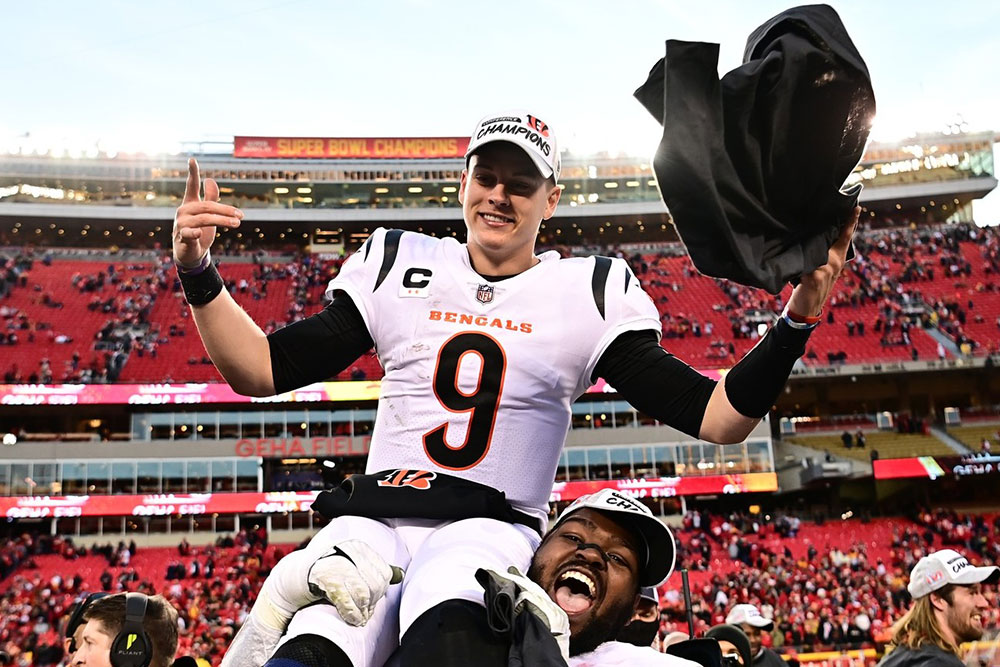 The question of the day is Who Dey?

That it’s even being asked in February should be intriguing to the Steelers.

“Who Dey?” is the longtime battle cry in Cincinnati, and part of a chant that includes another question:

For a long time, the answer was just about everybody the Bengals played.

The Bengals have won their way to Super Bowl LVI.

They’ll take on the Rams on Sunday at SoFi Stadium in Los Angeles and they’ll do so as the fifth team since 2000 to play for a Vince Lombardi Trophy after having finished last in its division the previous season.

Now the Bengals are one game away from a parade.

How they got here from there is as revealing as it was unanticipated.

Quarterback Joe Burrow was already in place, and he’s the biggest reason why these tigers have changed their stripes.

But in building around Burrow after last season the Bengals hit one home run after another.

They had money to spend in free agency and they spent it where it was needed, on defense.

An edge rusher as the headliner (Trey Hendrickson), a run-stuffer here (Larry Ogunjobi), a couple of cornerbacks there (Chidobe Awuzie, Mike Hilton) and all of a sudden the defense started sprouting teeth.

In the draft, meanwhile, the Bengals followed their instincts in searching for the right fits, as opposed to making what would generally be perceived as the right picks.

There was actually a debate heading into last season’s draft as to whether the Bengals should take an elite offensive tackle to protect Burrow or one of the gifted wide receivers expected to be available with the fifth-overall selection.

Ja’Marr Chase made the Bengals’ decision to opt for the latter seem like a no-brainer.

And on the fifth round, Cincinnati took a kicker.

Evan McPherson’s succession of game-winning field goals might change the perception of selections being at worst a waste and at the least too much to invest in a specialist.

The Eagles, Saints and Patriots wound up going all the way.

The Steelers, of course, were a first-place team this season, not a bottom feeder.

But given the way they were bounced out of the postseason by the Chiefs and their complete lack of playoff success (winning a playoff game) since 2016, it’s easy to perceive the gap between the Steelers and the Super Bowl to be about as vast as it was last season for Cincinnati, regardless of this season’s standings.

Having to replace Ben Roethlisberger at quarterback also looms as a significant hurdle along the way to a fast turnaround.

But they’ll be replacing the Roethlisberger of 2021, not vintage “Big Ben.”

So getting better at the position is much less of an unlikely occurrence than it may seem.

And the rest of the cupboard, while obviously ill-stocked in spots, isn’t bare.

Find the right complements to the likes of Najee Harris and Pat Freiermuth on offense and to Cam Heyward, T. J. Watt and Minkah Fitzpatrick on defense and the game can change in a hurry.

Long-ridiculed across Steeler Nation as the “Bungles” and at times hated during the Vontaze Burfict/Pacman Jones years, they’re now an inspiration to the Steelers.

That’s Who Dey are.

That and, just maybe, the type of team the Steelers can become sooner rather than later.