The Amazing and Important Things Being Taught Off Campus

For Pittsburgh’s universities, some of the most dynamic research and learning take place beyond campus borders. 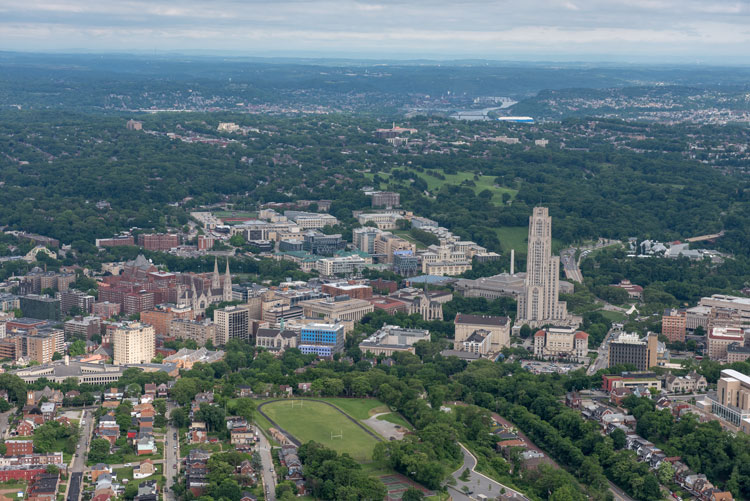 The remaking of an American city can produce something of an identity crisis, something Pittsburgh knows all too well. Once a proud steel city, now that the smoke has cleared, it has become a technology and health care hub, a culinary hotspot and a most livable city. Through it all, Pittsburgh has always been a college town. The colleges and universities throughout our region have shaped its identity as much as any industry or sports team. But while Pittsburgh’s higher education institutions have shown capacity for innovation, some of their most transformative work is happening off campus. 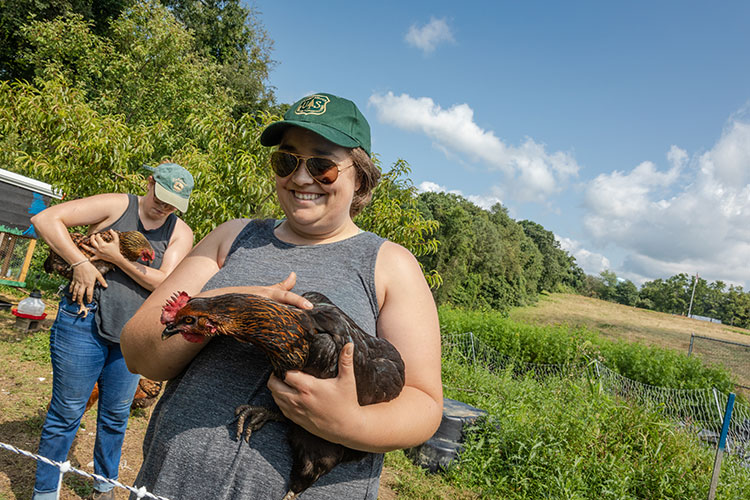 Around the region, and beyond, our universities have branched off to create a variety of both new and long-standing off-campus institutes, centers and separate campuses that continue to drive Pittsburgh’s education and research missions. 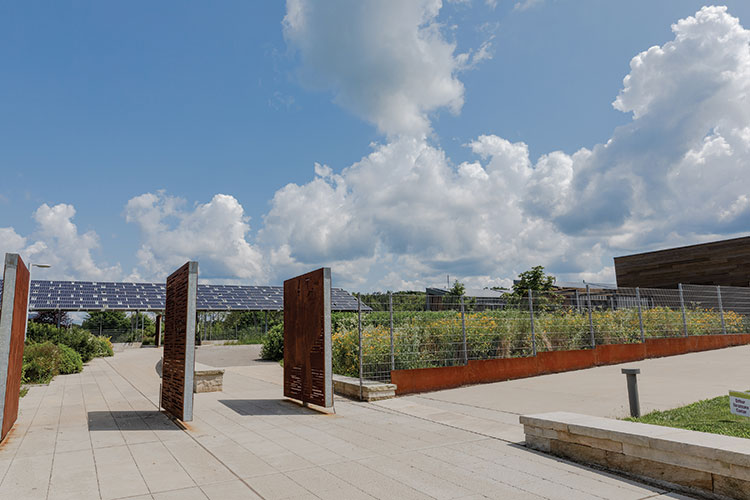 On 388 acres of rolling woodlands and fields in Richland Township, Chatham University’s Eden Hall is a showcase for sustainable solutions. Faculty, students and the public work together to support sustainability and environmental education.

Chatham University’s Eden Hall Campus is a key example. With Chatham’s deep roots in environmental education and with sustainability integrated into its mission — its alumni include trailblazing environmentalist Rachel Carson — the university seemed a natural recipient for the 388 acres of land in Richmond Township bequeathed by the Eden Hall Foundation. 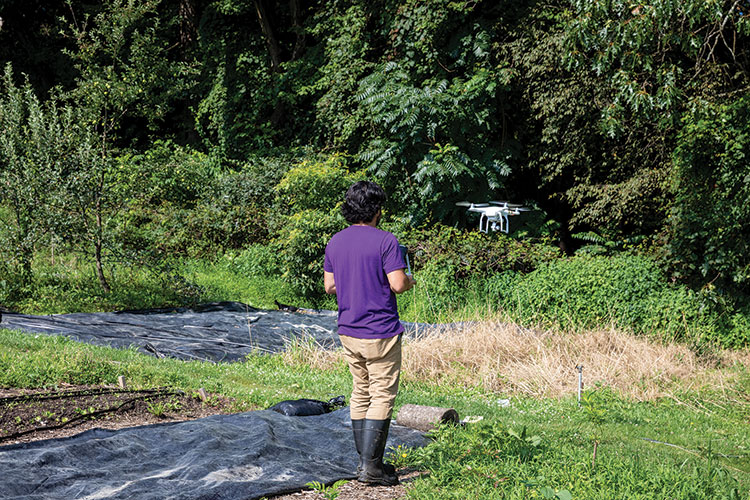 In 2012, Chatham broke ground on the new off-site campus — about 20 miles north of its Shadyside campus — designed to epitomize sustainability. With the first round of buildings and infrastructure completed in 2014, followed by the relocation of the university’s Falk School of Sustainability and Environment, Eden Hall Campus opened to students in 2015. 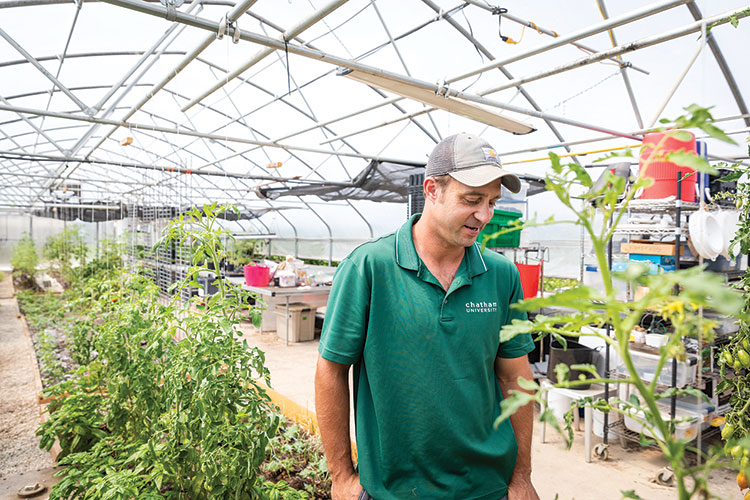 On the campus, geothermal heating and cooling regulates the interior air temperature and used water is treated and recycled back into the toilet systems. Produce comes from local farms, and solar energy powers buildings. Students studying the many facets of sustainability and environmental sciences conduct research and coursework in greenhouses, in surrounding fields and within restored farm sheds, dubbed muddy-boots classrooms, where everything is easy to clean. “The thesis being that, if we’re teaching sustainability, if we can do it steeped in an environment that demonstrates sustainability, you’ll get a better education out of it,” says Peter Walker, dean of Chatham’s Falk School of Sustainability and Environment.

Curriculum covers topics such as food systems and natural resources, but, across programs and majors, it also emphasizes the business of sustainability. “At the end of the day, if you’re going to make things more sustainable, it basically means making your business more sustainable,” Walker says. 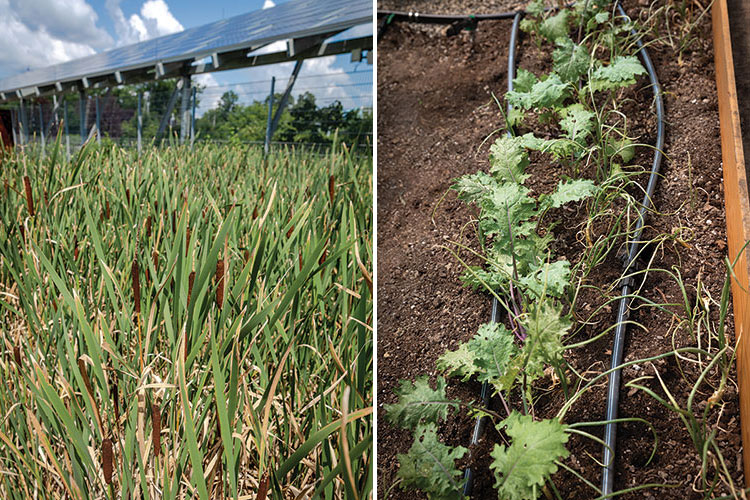 For Chatham, building another campus so ensconced in sustainability and green innovation simply wouldn’t have been possible within the city. 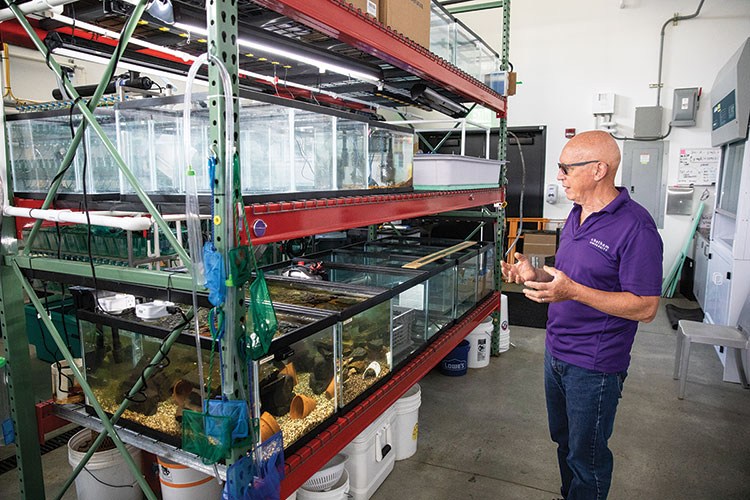 “[Eden Hall] really is enabling something that is very distinctive that there’s no way we could do right in the heart of Pittsburgh,” says Chatham University President David Finegold. “We really see this as offering a distinctive academic program, a set of research opportunities, and a chance to make a real difference on one of the most important issues facing us in Pittsburgh and globally.”

Yet, appealing to a shrinking demographic of high schoolers — the primary customers for most colleges — equally drives regional universities’ needs to offer specialized and attractive off-campus research and educational hubs such as the Eden Hall Campus. 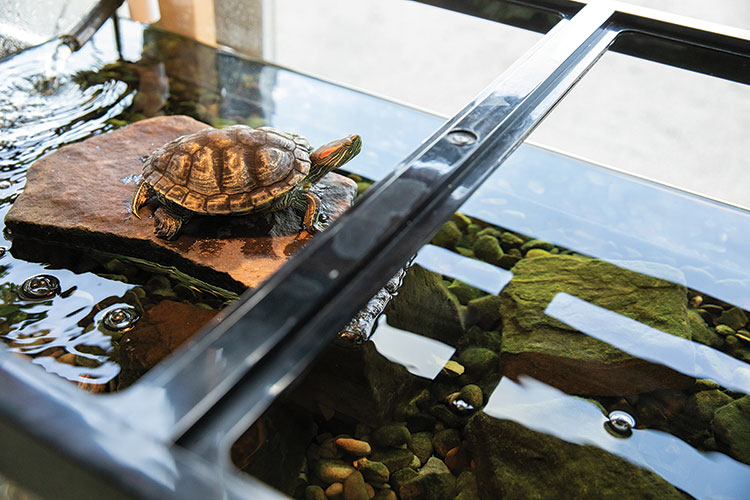 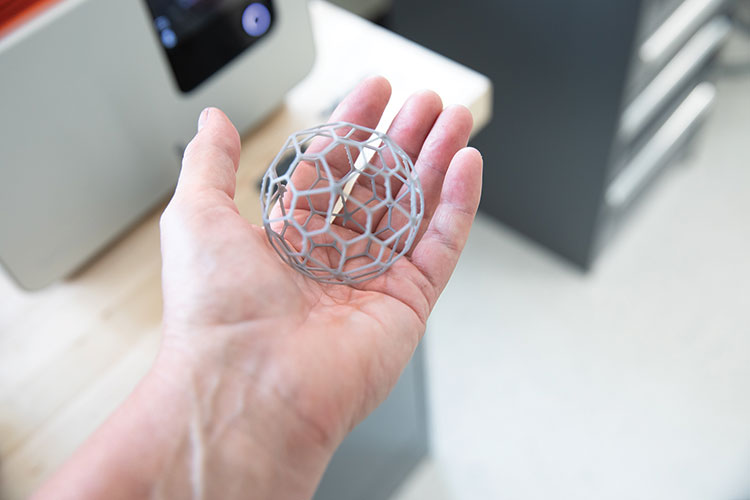 Robert Morris University’s 3D Printing and Additive Manufacturing Laboratory in the Energy Innovation Center in the Lower Hill District is a research and teaching facility with an emphasis on community engagement.

Moving educational facilities off campus can also bolster opportunities for nontraditional students while attracting a new base of learners and enhancing workforce needs.

In February, the School of Engineering, Mathematics and Science at Robert Morris University opened its 3D Printing and Additive Manufacturing Laboratory within the Energy Innovation Center complex in the Lower Hill District, 18 miles from RMU’s Moon Township location. 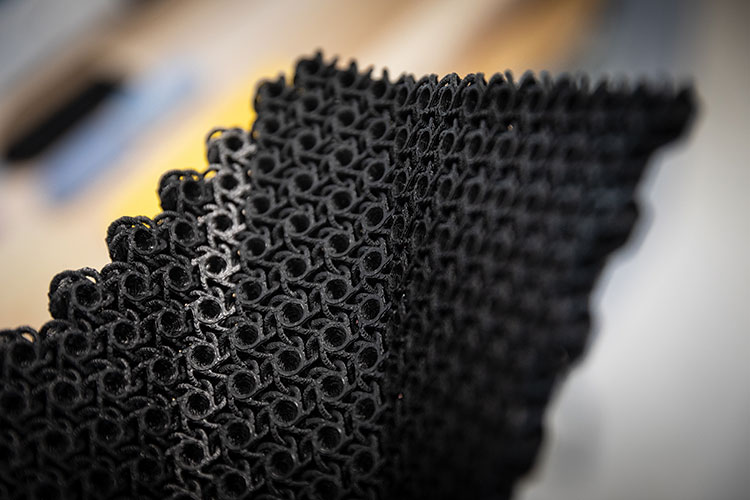 The research and teaching facility hosts college engineering courses, along with a manufacturing engineering certificate program that provides added credentials for tech sector and manufacturing workers and for recent high school grads, who can then apply credits toward an engineering bachelor’s degree at RMU.

The lab is also offering a free 42-hour program called Empowering Pennsylvania’s Workforce for Employment in Manufacturing. It is funded by a grant from the Pennsylvania Department of Community and Economic Development. “We aren’t going to thrive if we don’t look at other ways to educate and train people,” says Jonathan Potts, RMU’s vice president of marketing and public relations. 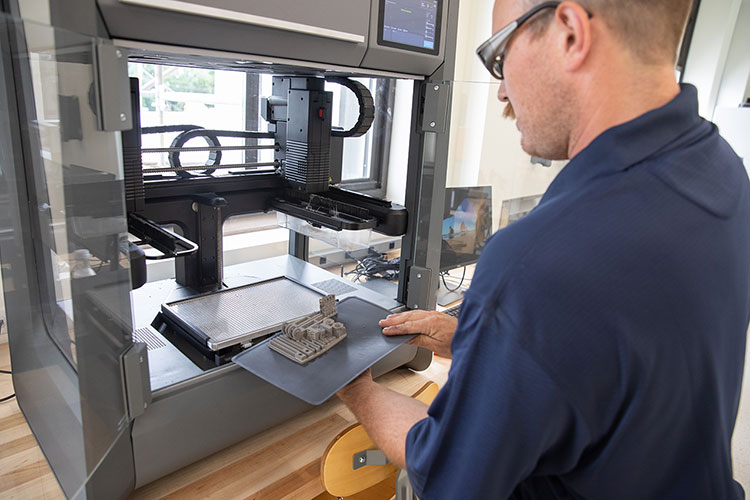 Pittsburgh could face a shortage of qualified tech sector and manufacturing workers if it doesn’t prepare enough students for these fields, says Maria Kalevitch, associate provost for Innovation and dean of the School of Engineering, Mathematics and Science. She says that RMU’s 3D Printing and Additive Manufacturing Lab can foster the skills needed for these fields, and, since 85 percent of RMU graduates remain in the region, the university is well suited to develop the worker pipeline. “This is something that is essential for everyone to think about — how the workforce pipeline will be created and who will be creating it,” Kalevitch says. “We have that unique ability to be flexible and nimble and to address the workforce-development needs in a way that not many institutions can do.”

3D printing builds in layers, enabling the precise construction of customized components for use in various industries. RMU’s lab’s researchers use 3D printing to improve prosthetics and orthotics, among other projects, and are experimenting with using new materials in the printing process. 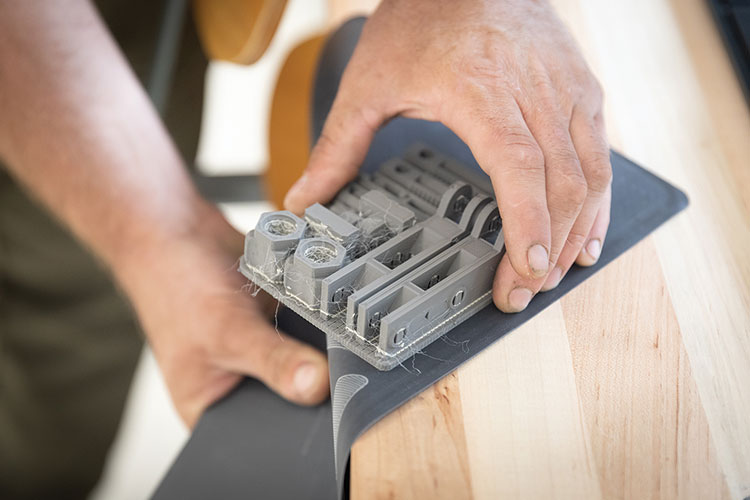 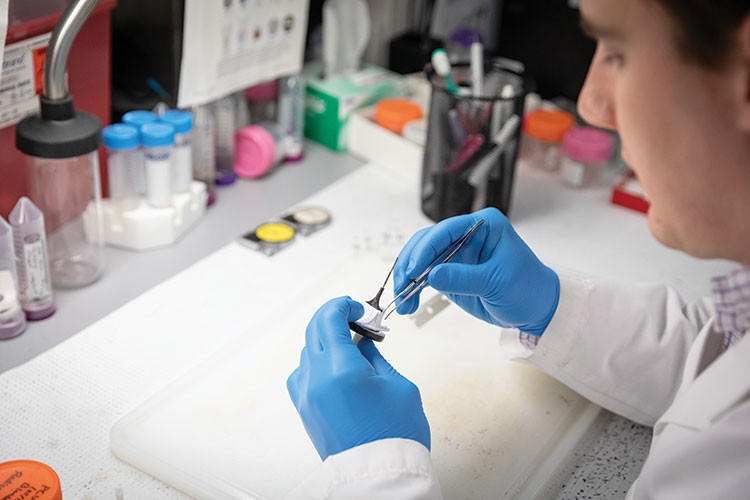 The McGowan Institute for Regenerative Medicine merges biology, clinical science and engineering. The institute was established as a base for work in tissue engineering, cellular therapies and artificial and biohybrid organ devices.

At the McGowan Institute for Regenerative Medicine, which was established by the University of Pittsburgh and UPMC, surgeons, engineers, biologists and other clinicians and scientists come together from disparate and distant corners of campus to develop technologies that address organ and tissue failure. 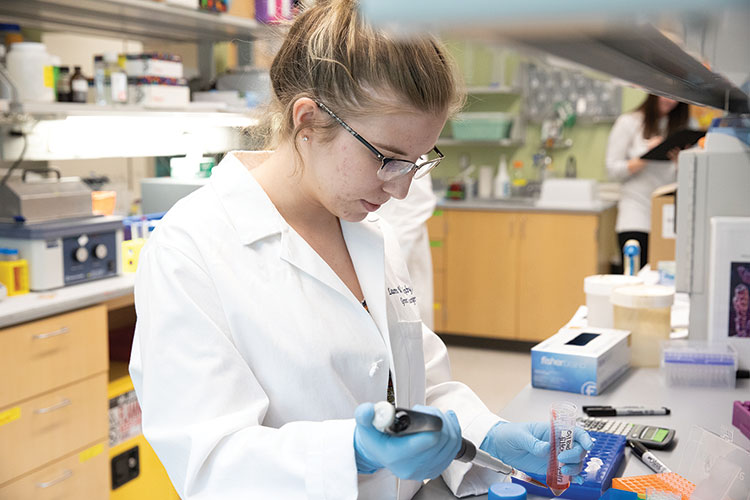 At the institute, researchers from Pitt and other institutions develop medical devices, conduct tissue engineering and advance stem cell therapies, among other pursuits. Projects include designing tissue-engineered heart valves and growing thin units of muscle to restore function. 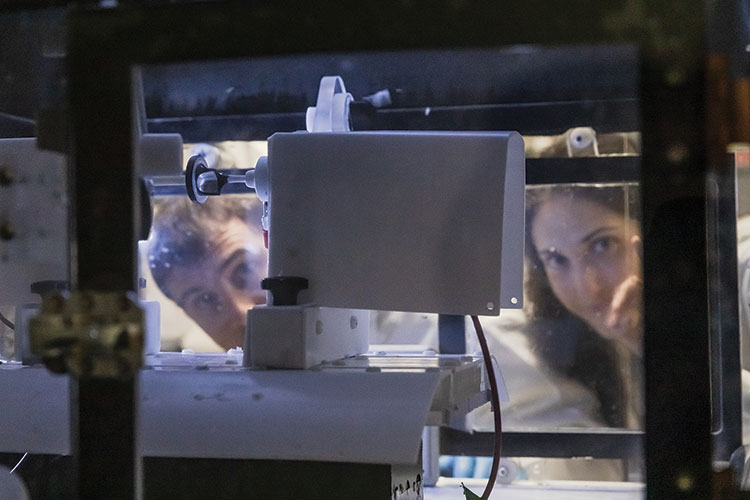 While people experience many forms of organ and tissue failure stemming from disease and injury, William Wagner, McGowan’s director, says the institute emphasizes the exchange of interdisciplinary knowledge and ideas needed to address these issues. “We absolutely have to be interdisciplinary,” he says. “And we have to be, really, transdisciplinary. 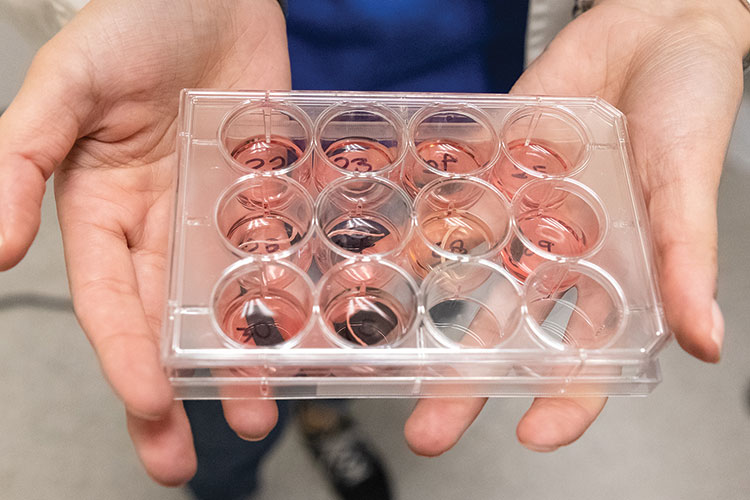 With Pitt and its chancellor, Patrick Gallagher, focused on expanding the university’s entrepreneurial and commercialization capabilities, Wagner says he hopes to see even more companies form based on technologies developed at the McGowan Institute and other local research centers. Commercialization, he says, is key to getting these technologies to patients.

Originally called the McGowan Center for Artificial Organs when it launched in 1992, the McGowan Institute for Regenerative Medicine expanded its scope and took its current name in 2001. 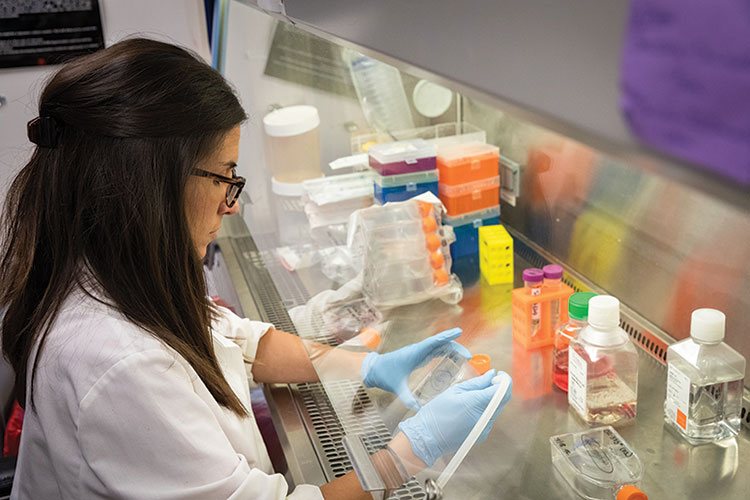 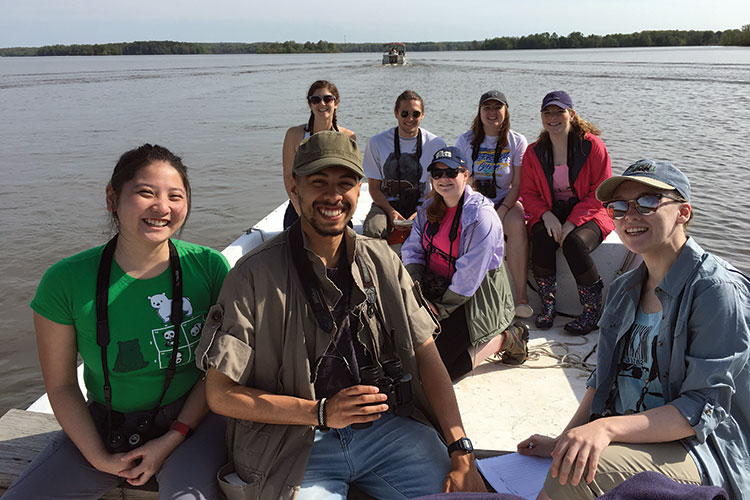 The University of Pittsburgh’s Pymatuning Laboratory of Ecology works with students and scientists from a wide range of educational institutions in Pennsylvania and other states.

But Pitt’s off-campus initiatives stretch back much farther. In 1929, Pitt began offering biology field courses taught out of a single-building facility at Presque Isle on Lake Erie. In 1949, operations moved to Pymatuning State Park, 100 miles north of Pitt’s main campus, where, today, Pitt’s Department of Biological Sciences’ Pymatuning Laboratory of Ecology is one of the country’s longest-running biological field stations.

The lab offers summer field courses on ecology, wildlife management, ornithology, herpetology — the study of amphibians and reptiles — and other subjects for Pitt students and students from Clarion, Edinboro, Indiana and Slippery Rock universities, among other schools. “One of the things I think [students] benefit from in the long term is sort of getting out of their comfort zone in terms of city life and trying something different,” says Corinne Richards-Zawacki, the lab’s director. The lab is planning to broaden its public and K–12 outreach programs to connect with the local community.

Scientists from Pitt and from schools such as Penn State, Duke University and the University of Miami come to the Pymatuning Laboratory of Ecology and its surrounding ponds and wetlands to study aquatic ecosystems, bird behavior, the effects of deer overbrowsing, amphibian population health and more.

In addition to classrooms and administrative offices, having lab space so close to the habitats being studied greatly improves research possibilities. “There are so many environmental variables that impact things that when you do a replicated experiment in the lab, you can’t capture that variation in any sort of meaningful way,”  Richards-Zawacki says. “A lot of ecologists rely on field studies and field experiments to really understand the complexity of the environment and how organisms interact with that.” 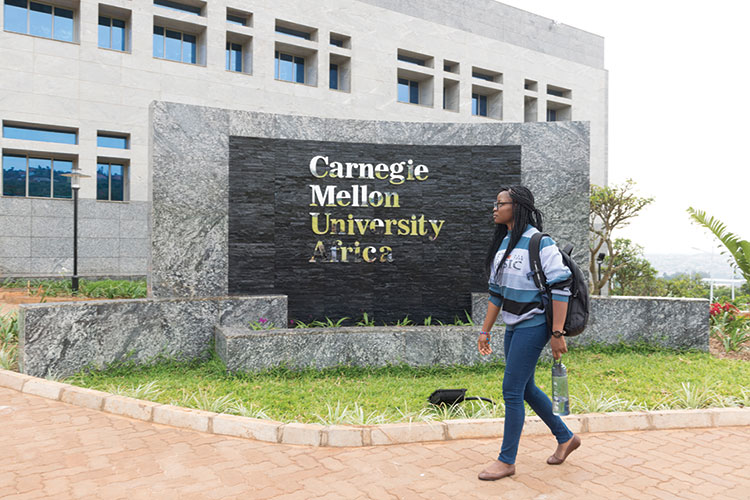 There, Carnegie Mellon University’s CMU-Africa program enrolls around 130 master’s degree students from Rwanda and about 14 other African countries.

In 2007, the government of Rwanda approached CMU about launching a program in its country. CMU agreed, and classes began in 2012. This summer, CMU-Africa relocated to a larger facility in Kigali that can accommodate 300 students, says Vijayakumar Bhagavatula, CMU-Africa’s director. The program enables CMU to support global good and intellectual expansion in one of the world’s most rapidly developing areas.

“If we really want to have a positive impact on the world and on the future, we cannot ignore Africa,” Bhagavatula says. 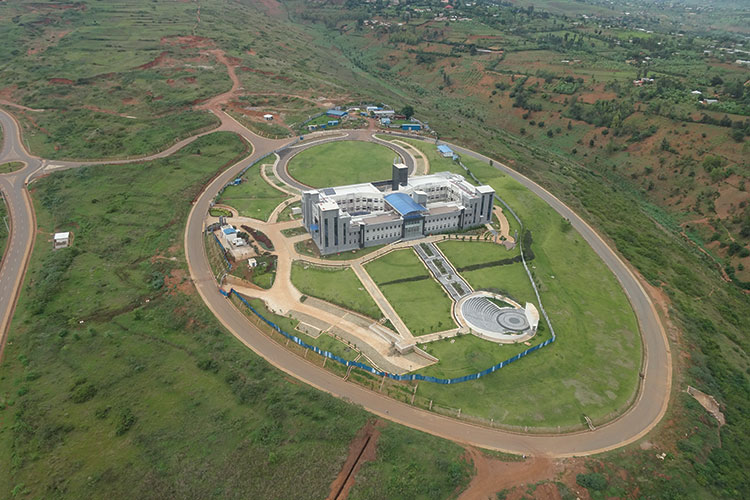 Globally, the youngest populations are in Africa, Bhagavatula says. In 20 or 30 years, much of the world’s working-age population will live in Africa. CMU-Africa, therefore, stresses entrepreneurship and the creation of new companies and jobs in Africa as students work toward their master’s degree in information technology and electrical and computer engineering, the two degree programs currently offered. “We strongly believe that it’s not enough for students to get degrees and to get jobs — that creates only one job,” Bhagavatula says.

A Pittsburgher since 1977, Bhagavatula witnessed the steel mills’ decline followed by the rise of IT, computer science and biotech startups that helped drive the city’s comeback. Now, he sees parallels between Pittsburgh and African cities such as Kigali. “In some sense, what we are seeing in Kigali is what we were seeing in Pittsburgh maybe 20 years ago, maybe 30 years ago,” he says.

Right now, CMU is the only top U.S. engineering university on the ground on the continent, Bhagavatula says.

But that may change as other universities put Africa on their radar and seek to expand beyond their borders.

This article appears in the September 2019 issue of Pittsburgh Magazine.
Categories: Education, From the Magazine, Hot Reads