The 5 Best Comic Shops in Pittsburgh

For the superhero fan culture and the nerd community, comic book shops are a hideaway for geeks. Unlike your typical bookstore, most of these shops are designed to be hangouts for both old fans and new readers. Their extensive selections and resident aficionados invite fan-driven conversations like who really would win in a battle to the death between Superman and The Incredible Hulk? These obscure conversations are what make comic book shops so majestic.

They are more than just a niche. They allow entrance into a safe, casual world where the only rule is the positive expression of your fandom.

With the surging success of comic-book-inspired films over the last decade it seems more fans are visiting their local comic havens with increasing fervor. Which shops are the best for new enthusiasts who are just beginning to scratch the surface of these illustrated universes? Which ones will help quench your thirst for more thrilling animated action?

Here are our five favorites. 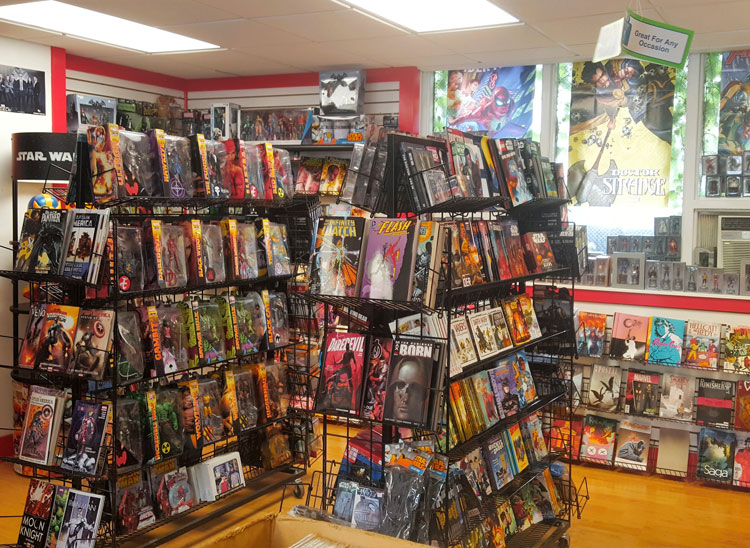 Big Bang Comics & Collectibles
If you fancy the small, local comic hangouts made famous by the likes of Kevin Smith and his “Comic Book Men” you’ll love Big Bang Comics. A tiny little hole in the wall off the corner of Sewickley’s Beaver St., Big Bang is the epitome of your main street geek retreat. Owned by Dave Bishop, the shop packs an impressive arsenal of new comics, silver age gems, graphic novels and memorabilia. This is definitely a store that will cater to the new fan with its abundance of new releases specially on DC’s “New 52” end. Their twenty-two volume collection of Vertigo’s Fables is the pride of their indie possessions. What separates Big Bang from the rest of the pack is the friendliness and courteousness of Bishop and his staff. They are always willing to engage and educate new and old fans alike What’s more, Big Bang holds weekly Magic the Gathering game nights for those fantasy card playing fiends.
[437 Broad St., Sewickley; 412/259-8742] 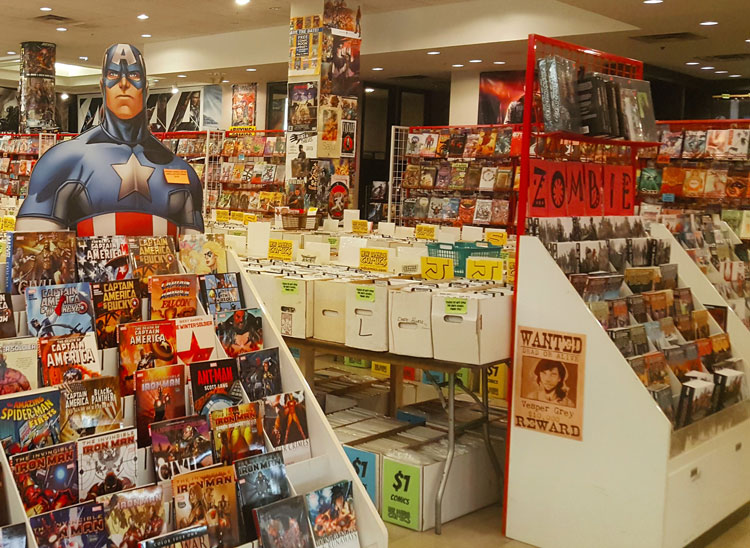 New Dimensions Comics
This geek paradise is hidden in the corner of the near-derelict Century III Mall and is well worth the hike down Route 51. New Dimensions’ may have the broadest collection of comics, manga, graphic novels, collectibles and board games in the area. With their massive geek assembly and floor space it is no wonder they hosted the Three Rivers Comic Con on May 21-22 (along with their West Milford store, New Dimensions Comics also has three other locations in the Greater Pittsburgh area).  Everything in the store is neatly organized in alphabetical order, including their $3 bronze age collection which has hidden gems like “Devil Kids’ Hot Stuff” and original “Showcase” titles. Their attentiveness to organization makes the store all the more likable. Looking to add ultra-rare and expensive gems to your collection? New Dimensions stable of ‘character first appearances’ like Dr. Doom in “Fantastic Four #2” are sealed, graded, and prominently situated in the center of the store (prices vary from $50 to a few hundred dollars). New Dimensions even has a third of its store dedicated to board games, Funko Pops! and the legendary Toy Biz figurines that many ‘90s kids had. It caters not just to comic book fans, but the many identities of nerd culture. They even host weekly Dungeons & Dragons tournaments. Fans can visit Wednesday nights from 6p.m. – 9 p.m. and join an open game of D&D. You might stop in looking for a new read, but you’ll stay for the games and geek-fueled conversations.
[3075 Clairton Rd., Century III Mall, West Mifflin; 412/655-8661, ndcomics.com] 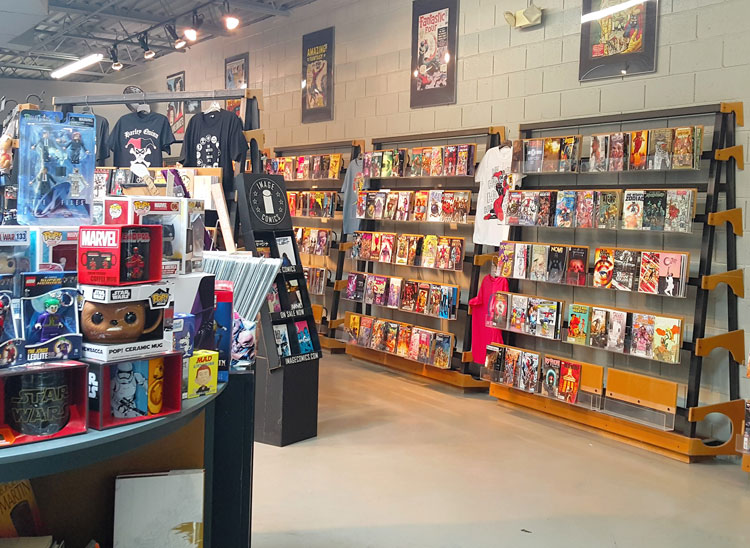 Phantom of the Attic
Have diverse taste? Look no further than Phantom of the Attic. Nestled between the borders of CMU and Pitt is one of the best nerd idylls in the city. Phantom has a little bit of everything for every facet of fan. Whether it be collectible figurines, memorabilia like the hand-crafted pint glasses that decorate the cashier desk or the dozens of drawers of silver age comics, new releases and indie titles – Phantom’s got it covered. Adding to Phantom’s allure is how simple the attic is to navigate. Shoppers can move from the 50-cent bins at the front of the store to the graphic novel section with ease. Each portion of the store is separated and organized, a nice feature for newbies and collectors alike. Phantom also boasts a small but popular manga section with titles like “Deadman Wonderland” and “Attack on Titan”, a convenience not many competing stores offer. Two bookcases of indie and local artists inspire new interests, but their entire shelf dedicated to the works of Neil Gaiman might be the store’s crème de la crème.
[411 South Craig St., Oakland; 412/621-1210, pota-oakland.com] 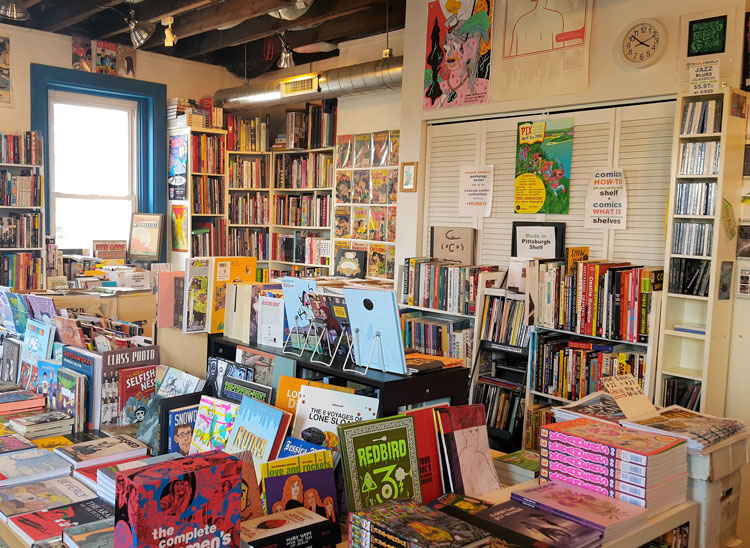 The Copacetic Comics Company
After hiking up to the third floor of the Dobson Street building and hearing smooth jazz radiate from owner Bill Boichel’s stereo you’ll realize Copacetic Comics Company is not your typical DC or Marvel treasury. A hybrid comic book store and indie book destination, it offers fans and collectors one of the most diverse and surprisingly affordable locations for niche tastes. Be warned, Copacetic offers a rather mature selection of readings, but their stockpile may be the best bang for your buck. For collectors, their bronze and silver age comics are not only layered with steal after steal of highly graded comics but they also offer completed packages of series like the legendary 1983 Green Lantern and Green Arrow team-up for under $20. For non-collectors, Copacetic offers the largest surplus of local artists and indie comics in the region. No other store around caters to the local artist scene the way CCC does, offering the most recent publications from Pittsburghers like Daniel McCloskey, Nils Balls, Jonas McLuggage and Maggie Negrete. In addition, they host the annual Pittsburgh Indy Comic Expo, PIX. With such myriad tastes, the Polish Hill location embodies its copacetic title.
[3138 Dobson St., Third Floor, Polish Hill; 412/251-5451, copaceticcomics.com] 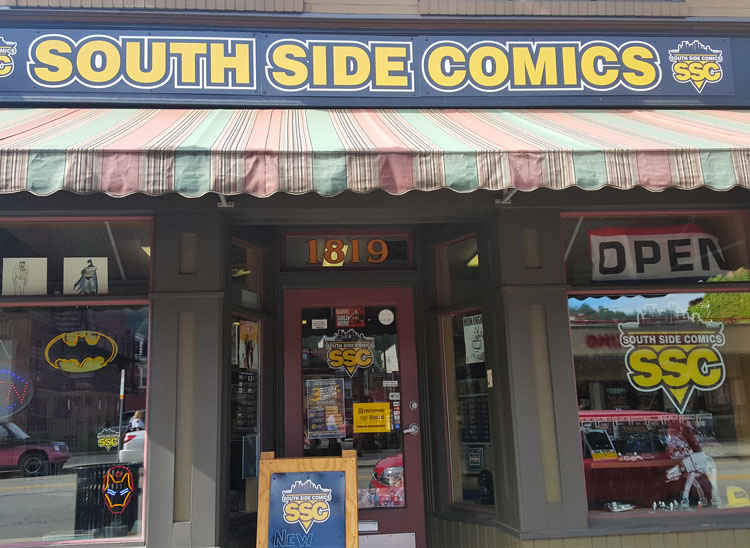 South Side Comics
At South Side Comics, fans can snag the newest issue of “Suicide Squad”  then swing on over to Piper’s Pub for a stout. Sandwiched in the heart of East Carson Street, SSC boasts one of the most impressive selections of new and independent publishers. With row after row of newly released comics and two racks specifically for the lesser-known publishers Image and Dark Horse, South Side Comics is one of the best destinations to quickly educate yourself on the current comic scene. The store’s television always is airing the latest episodes of superhero shows like CW’s “Arrow” or the newest Blu-ray release like this month’s “Deadpool.” In addition, they yield the best reservoir of Star Wars comics and their hoard of variant covers is extremely impressive. Their array of graphic novels and paperbacks is perfect for fans wanting to quickly jumpstart their knowledge of a particular character or super-powered team. Don’t forget to check out their back room where a slew of silver age gems awaits patiently for a new home.
[1931 E. Carson St., Southside; 412/251-5779, southsidecomicspgh.com]

This article appears in the August 2016 issue of The Best Blog.
Categories: Best of the ‘Burgh