Natalie Portman stars in an intriguing (but strange) popstar story. 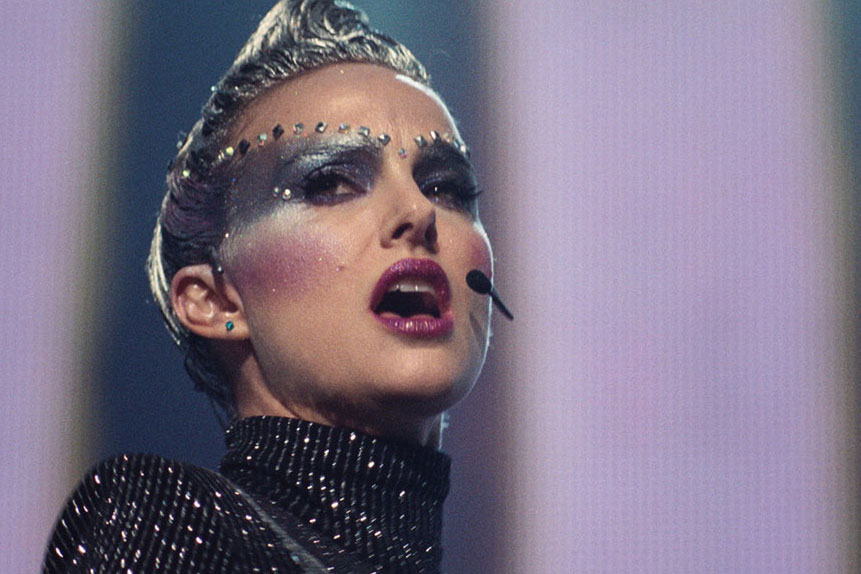 Vox Lux,” a stylish drama starring Natalie Portman, is good; I wouldn’t call it a bad movie by any stretch. Yet I can think of few movies that decide, as this one does, to ignore a promising premise and conclude in a pedestrian, if artful, way.

In the harrowing opening sequence of writer/director Brady Corbet’s film, a school shooter strikes in a Staten Island homeroom, killing the teacher and mowing down a group of cowering students. The victims include Celeste Montgomery (Raffey Cassidy), an open-hearted teen with soft-spoken defiance; she attempts to reason with the assassin (Logan Riley Bruner), who shoots her in response.

Despite a temporarily debilitating injury, Celeste survives; while recuperating, she and her sister (Stacy Martin) compose an elegy for their fallen classmates. The song becomes a hit; suddenly, Celeste is a star, complete with a doting (if unscrupulous) manager (Jude Law).

The script, with ample assistance from an unseen narrator (Willem Dafoe), is quick to point out that the corruption of popstar excess, rather than the massacre, robs Celeste of her innocence. It leaves an open question for the second half of the neatly divided film: Will the budding star’s tragic circumstances spare her of the worst parts of stardom?

The answer is … no, they won’t. The back half of “Vox Lux” is a fairly unremarkable exploration of the barely there superstar; Celeste, now played by Natalie Portman, struggles to maintain any sort of relationship with her teen daughter (Raffey Cassidy again), spars with the media (a second massacre, halfway around the world, draws parallels that Celeste is disinclined to explore) and nearly ruins a comeback show by getting violently high.

There are some interesting conversations in this section, but none of them seem particularly concerned with the fascinating premise that Corbet establishes. It is as if, halfway through the script, he became interested in other things. And while the cast, Cassidy and Portman especially, are quite good, the film obstinately refuses to push its characters in particularly interesting directions.

A long ending stretch turns “Vox Lux” into a concert film, as our fictional star is given the opportunity to perform several uninterrupted numbers. There are interesting parallels, here, in the year of “A Star is Born” and “Bohemian Rhapsody.” But while the ultimate performances in those films gave parting insight, the conclusion of “Vox Lux” only serves to highlight the film’s many unanswered questions.