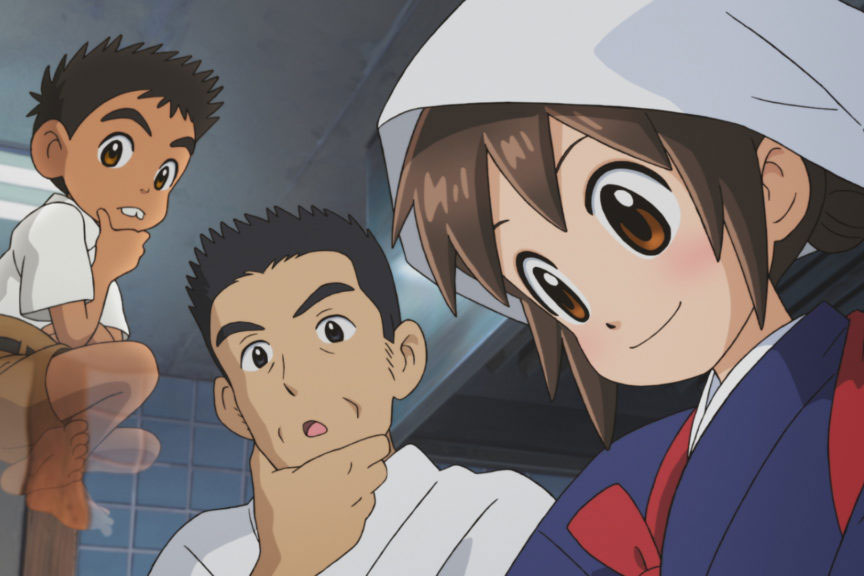 In “Okko’s Inn,” a charming work of animation from director Kitaro Kosaka, the titular junior innkeeper is a determined grade-school student. She’s learning the hospitality trade in a small lodging — we’d call it a B&B on this side of the Pacific — from her kindly grandmother, Mineko. She’s a quick study; we watch Okko charm and befriend a stylish fortune teller, bring a defiant teen out of his shell and invent a signature dish in the inn’s kitchen.

Why is Okko such a dedicated worker? A ghost insisted on it. Uribo, a mischievous spirit frequently found gently rotating in mid-air, was a boon companion to Mineko in childhood; he’s hung around the inn since. The innkeeper is approaching old age, however, and he knows she’ll need a protege. Okko fits the bill. There’s another ghost around, too: Miyo, the sibling of Okko’s bratty schoolhouse nemesis.

And why can Okko see ghosts? Her parents just died in a tragic car crash.

She was in the car, too, thrust through the windshield, only to land on the roof of another car, miraculously unharmed.

“Okko’s Inn” is about grief. It’s an undeniably moving and difficult tale, tracing Okko’s acceptance of death through dreams and visions of her late parents as well as her bond with Uribo and Miyo. There are parallels between the two pairs — Mom and Dad, Uribo and Miyo. It could be read that the loyal spirits are manifestations of Okko’s grief, the thing she must hang on to until she’s ready to let her parents go.

Yet that tale is mostly told in the space between scenes and sequences. The action of the film is that of the inn; navigating menu requests, cleaning the floors. Okko becomes a minor celebrity after a magazine article enumerates the inn’s charms, including the bright-eyed and attentive junior innkeeper.

Her small bit of fame shores up the hotel’s finances, making for a curious structure. There’s no conflict in the stories of the hotel, which the movie is about; the conflict exists in Okko’s struggle with grief, which the movie is not about. It’s a disarming and interesting way to tell a story, reminiscent of the indelible “My Neighbor Totoro,” which bears clear influence on “Okko’s Inn.” This film does not quite achieve the magic of the best Studio Ghibli masterpieces, but bears a similar easy — and very watchable — charm.

“Okko’s Inn” is making its area premiere as part of the Pittsburgh Japanese Film Festival. The festival, which takes place at Row House Cinema, opens March 29 and runs through April 11. Select local theaters will also host screenings of “Okko’s Inn” on April 22 and 23.