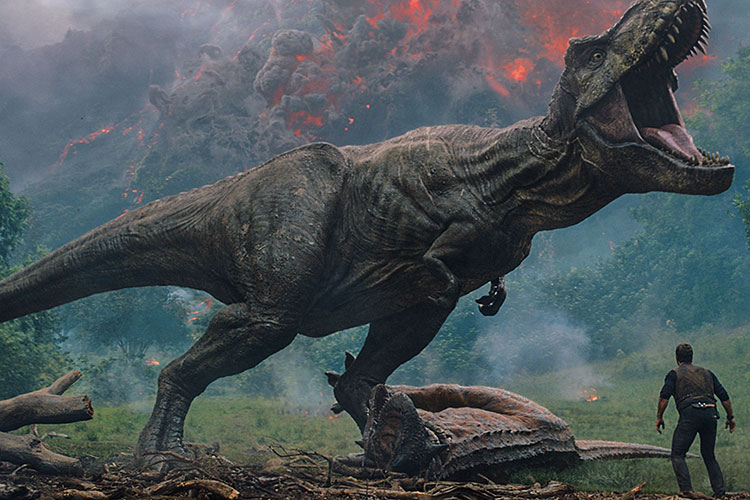 The tagline for “Jurassic World: Fallen Kingdom,” the fifth film in the enormously successful franchise, reads: “The park is gone.”

Its literal meaning refers to this film’s inciting incident: It turns out that the park was located on and around an active volcano. (You’d think they would’ve noticed before building two billion-dollar theme parks on the spot, but let’s not quibble.) In the first act of “Fallen Kingdom,” the volcano goes off and the park is destroyed.

Considering that tagline as an unabashed fan of the franchise, though, I read it differently. “Jurassic Park,” the fictional place that captured my imagination as a child — as well as its commentary on man’s eternal struggle with nature and science — is, canonically, gone. And with it, the magic and wonder of that first film departs; as much as “Jurassic Park” was a monster movie, it was also a fantastic adventure. “Jurassic World,” the series-revitalizing fourth film, flirted with that feeling.

The park is gone.

Claire Dearing (Bryce Dallas Howard) has undergone an unbelievable, offscreen transition from cold business type to open-hearted conservationist. She’s trying to get the dinosaurs off of the rapidly exploding island and into a sanctuary; with the help of a wealthy billionaire (James Cromwell, retconned into the series’ mythology as a former business partner of the late John Hammond), she mounts a rescue expedition, with Owen Grady (Chris Pratt) along for the ride.

“Fallen Kingdom” is fun. People fight dinosaurs, dinosaurs fight other dinosaurs, there are magnificent set pieces and fine effects. I can’t say you won’t have a good time when you go to the theater and watch this film; of course you will. This team (J.A. Bayona, obviously imitating producer Steven Spielberg, directs) certainly knows how to do flash-bang spectacle.

But there are no longer any ambitions beyond creature-feature thrills and popcorn fun. What little ham-fisted commentary has been laid atop the script flutters away; where the series once had drama driven by likable, round characters, there are now broad signifiers and near-slapstick violence.

The dinosaurs are still here. But the park is gone.