"First Man" manages to capture the awe that landing on the moon should — and all but guarantees Ryan Gosling an Oscar nomination. 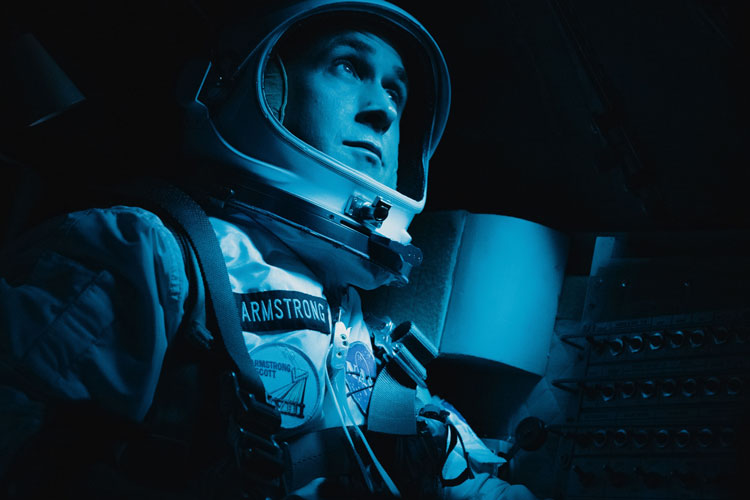 The stars of “First Man” are noise and silence.

Harrowing, pulse-raising sequences of spacecrafts straining against physics are accompanied by deafening, mechanical shrieks. Sirens blare; tinny voices fight to be heard against the din.

And then, Neil Armstrong — the last great pioneer, who rose to fame with humility and a decided lack of charisma — will spend whole minutes of screen time saying nothing at all, a quiet that suggests a mind that’s disinterested in words.

Damien Chazelle’s masterful adaptation of James R. Hansen’s biography focuses on Armstrong as a hero whose ambition is a matter of course. Yes, he wonders at his first glimpse of space, but fundamentally, he’s going to work. In Ryan Gosling’s portrayal — an instant awards contender and possibly a favorite for Oscar glory — Armstrong’s strongest feelings are unspoken, only passingly glimpsed drifting across his face.

The emotion, then, is left to Janet (Claire Foy), Armstrong’s wife and the mother of his three children (including Karen, who died before her third birthday and may have inspired Armstrong’s journeys). Janet is fundamentally, exasperatedly aware of the inequity in their relationship; she must shoulder the whole weight of the family’s emotional burden — including that of her husband, whose sole fear seems to be open, emotional dialogue.

“First Man” is not quite a family drama, though the increasingly threadbare bonds between Armstrong and the rest of the household provide counterpoint to the difficulties at NASA. Nor is it strictly an adventure tale; while sequences of Armstrong and fellow astronauts wrestling with their primitive ships are harrowing, this is obviously not a movie in which the outcome is in any doubt.

The film is mostly a portrait of endurance, completing a trilogy of Chazelle films focused on dangerous obsession. “First Man” certainly recalls “Whiplash” more than the sparkling “La La Land,” but the protagonists are similarly motivated. Mia and Sebastian, Andrew Neiman and Neil Armstrong are singularly focused, aggressively ambitious and — vitally — comfortable with any level of sacrifice in pursuit of their divergent goals.

“First Man” is necessarily indulgent — its very nature requires long, difficult passages and a somewhat exhaustive running time. In spite of this (and, perhaps, partially because of it), it is one of the most compelling portraits of 20th-century history in many years. And, in its best moments, it manages to capture the awe that landing on the moon should.