The 4 Best Sports to Try This Spring in Pittsburgh

Looking to switch up your physical activity now that it finally feels like spring? We found four sports you can play locally that you may never have considered.

Football, hockey and (sometimes) baseball dominate in the Steel City sports scene, but our options don’t end there.

Try your hand at one of these four sports that are alive and thriving in the ‘Burgh. 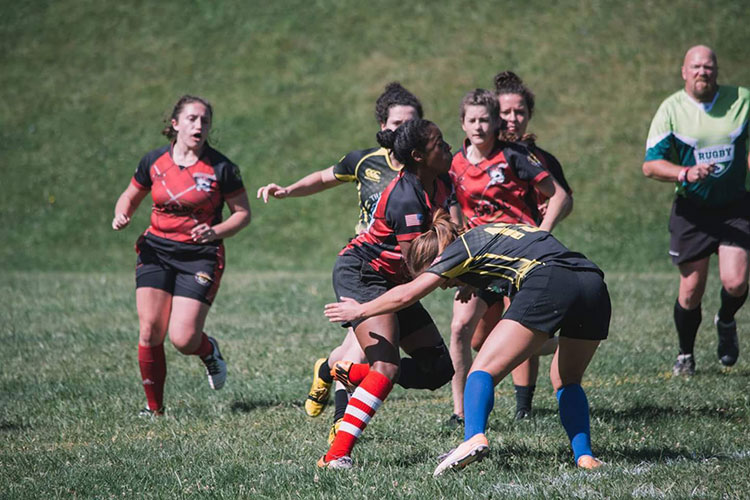 For a fast-paced and physically demanding sport, look no further than rugby. Like many sports, the goal of rugby is to score the highest number of points in a match. Players pass the ball laterally or backwards to one another to advance up the field to their opponent’s tryzone. Any player can run with the ball, pass, kick or score.

Rugby is a full contact sport with complete tackles requiring a player to wrap their arms around their opponent before driving them to the ground. A try is scored when the ball is grounded over the opponents’ goal line in the in-goal area. Other points can be scored by penalty kicks, conversion kicks, and drop goals.

The sport has gained traction with youth leagues, high school and college teams, clubs, organizations and tournaments all over the Pittsburgh area. Pittsburgh teams play one another as well as teams across the state and country. 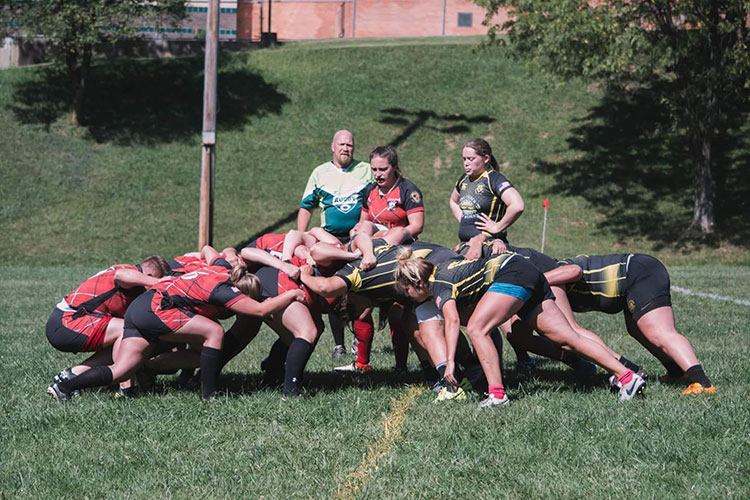 Interested players can learn more about rugby from the Pittsburgh Forge Rugby Club, the newly merged club by the Pittsburgh Rugby Club and the Pittsburgh Highlanders. The two clubs will play one final match against each other on May 19 before officially becoming one.

“The best part about rugby is it doesn’t really matter what your body type or athletic abilities may be, there will be a spot for you on the field somewhere,” says Angela Smarto, interim president of the Pittsburgh Forge Rugby Club, a title she shares along with interim president Neil Reynolds of Pittsburgh Highlanders.

“When you play rugby, you are part of a bigger community because rugby culture is very social,” says Smarto. “You play your opponents, you shake their hand, and then you feed them for free and they return the favor. It doesn’t matter how good you are, once you’re in, you’re in.” 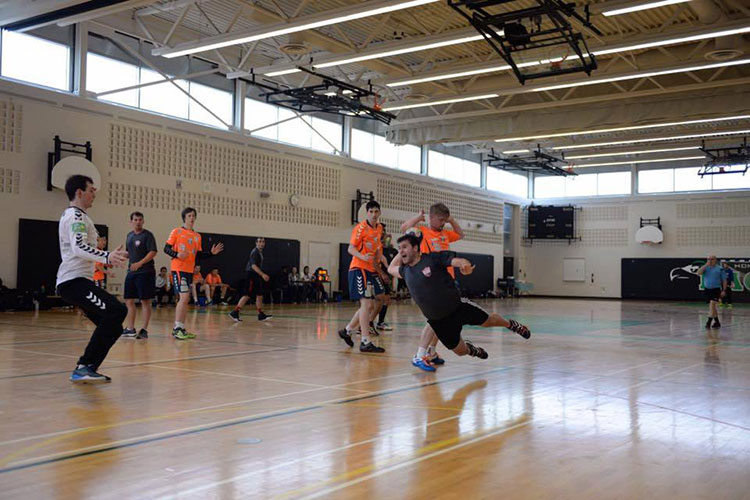 A standard handball game features seven players on each team working to score the most goals by handling and throwing the ball using, you guessed it, their hands. Players can pass, hold possession or shoot. If they hold possession, they can dribble or take three steps for up to three seconds without dribbling. Players must shoot from outside the goal area because only the goalkeeper can be within that space.

“I think the reason I play handball is because I can still be physical without the risk of turning an ankle like I would playing basketball or football,” says Andrew Burick, founder of the Pittsburgh Team Handball Club. “It’s harder to get injured playing handball because it’s less jumping up and down and more focus on speed and passing.”

The Pittsburgh Team Handball Club was founded in 2016 and competes locally with other teams. They do practices and pickup games and see teams go to regional and international tournaments. Because it is an international sport, most popular in Europe, Africa and the Middle East, handball provides the opportunity to network and play with people of all cultures.

“We have people from all over the world and different walks of life that you might otherwise not usually meet,” says Burick. “The Pittsburgh Team Handball Club is very social, good for networking, and gets people together to play this unique sport.” 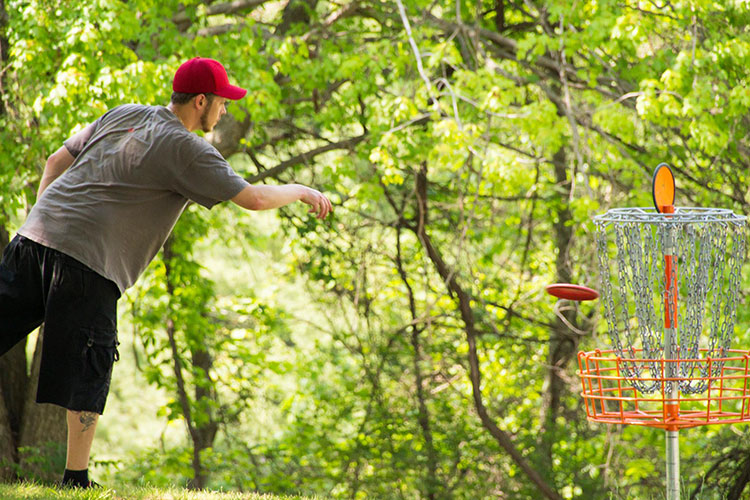 Disc golf is simply a variation of traditional golf, but instead of a ball and club, players use special Frisbee discs. Disc golfers throw the discs from a tee area toward a target, throwing again from the landing spot of the disc until the target is reached. Players seek to complete the course with the lowest number of total throws.

Schenley Park in Oakland and Knob Hill Park in Warrendale have beginner-friendly courses, and a championship level course is planned for Cranberry Township in North Boundary Park. Beginners can use regular Frisbees and most disc golf sets run from $7 to $20. 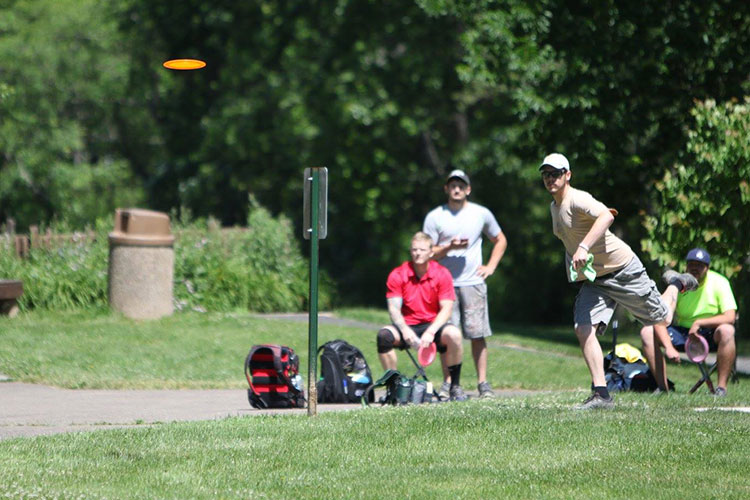 So how can you get involved? Look no further than the Pittsburgh Flying Disc. Founded in 1988, the association promotes flying disc sports and games through events, programs and publications. Search the site to find courses, leagues and other resources to start playing disc golf in the Pittsburgh area.

“If you like going out and walking in a park or hiking and you’re looking for a spin on enjoying that time, disc golf is a great opportunity,” says Eden Gonano, communications director for the Pittsburgh Flying Disc. “All you really need is one disc and go out there and play and enjoy it.” 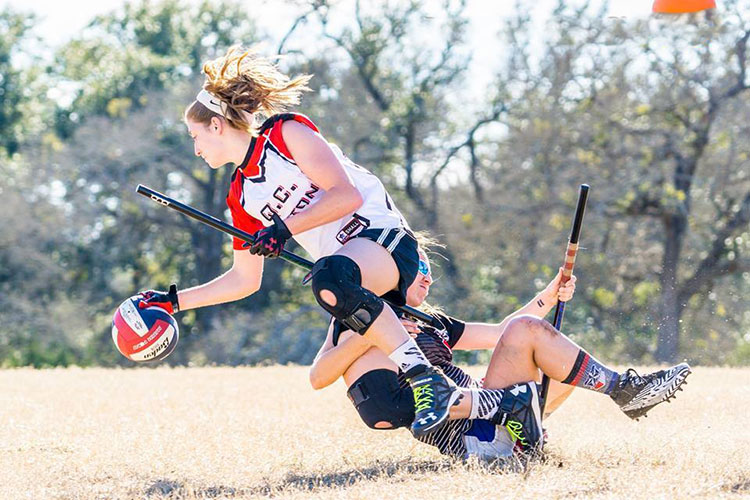 Sprung from the imagination of J.K. Rowling and adapted by fans to fit the laws of gravity in the Muggle world, Quidditch is a mixture of rugby, dodgeball and tag played on brooms or capped PVC pipes, 40 inches long for safety measures.

Each team is comprised of seven players: one seeker, three chasers, two beaters and one keeper. In the non-wizarding world, chasers score goals with the quaffle (a slightly deflated volleyball) by throwing or kicking it into the hoops, which are guarded by the keeper. Chasers are blocked by the beaters who throw bludgers (dodgeballs) at them to knock them out of play. The seeker chases and catches the Snitch to score 30 points and end the game. The Snitch is a neutral player dressed in yellow with a Velcro tail attached to their shirts that the seekers must pull off. 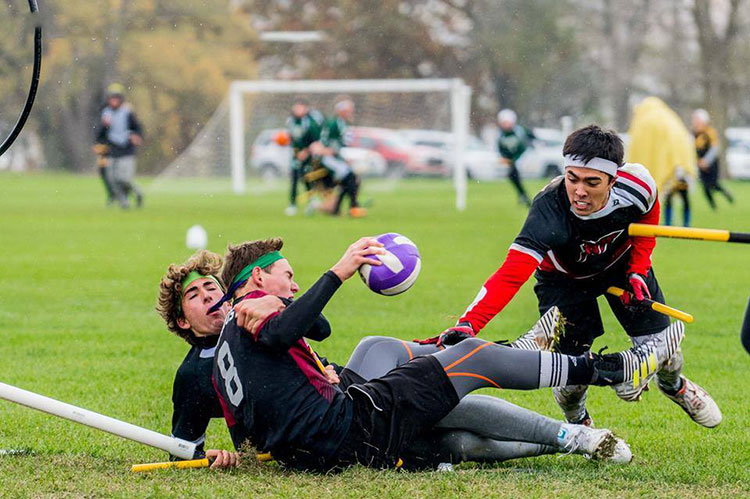 “Quidditch is definitely different as it’s a mix of Harry Potter fans and people who saw the sport for its athleticism and wanted to join for that,” says Michael Clark-Polner, captain of the Steel City Quidditch Club. “It’s a mandatory co-ed and very accepting sport. No matter your gender, body type, if you’ve played sports all your life or are just getting into it now, we don’t care, we want all people to learn it and have a good time.”

This article appears in the May 2018 issue of The Best Blog.
Categories: Best of the ‘Burgh