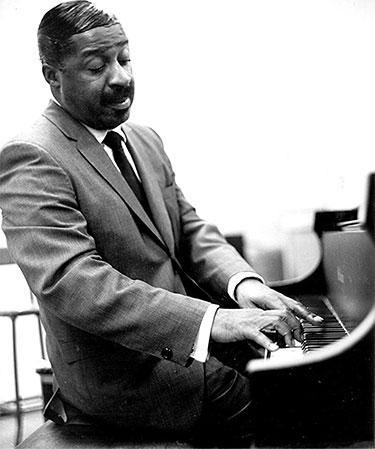 Noted for his virtuosity despite never having learned to read or write music, Garner was young when family and friends recognized him as a musical prodigy who could play any composition by ear. He told the Pittsburgh Press in 1966, “I just started to pick out chords [and then melodies] when I was 3 years old … I see more and more that it’s a gift from God.”

In 1931, while in grade school, he started performing with a group of gifted youngsters called the Kan-D-Kids; the troupe appeared at the Roosevelt Theater, on KQV radio and later on WWSW. The Kan-D-Kids sported sugary nicknames such as “Peppermint” and “Tootsie Roll.” Erroll was known as “Gumdrop,” and his piano skills amazed audiences even then.

After playing tuba in the Westinghouse High School marching band, Garner started to get attention in local jazz clubs, played on some riverboats and for a time was part of the Leroy Brown Combo at the Melody Bar on Centre Avenue. In 1941, he first traveled to ply his trade in New York City and soon began making records; his arrangement of the ballad “Laura” sold more than 500,000 copies in 1945.

His improvisational skills and memory were phenomenal. Prominent jazz critic Leonard Feather once described his unusual playing: “A left hand that chugged away like a happy-go-lucky local train while the right hand soared into those flurries of single notes with their delayed-action beat, or cascades of jubilant chords that seemed to tell you: ‘Boy, am I having a ball!’”

Garner, who wrote more than 200 songs, claimed that he came up with his most famous, “Misty,” in July 1954 while on an airplane from San Francisco to Chicago. He composed it not on a keyboard but by pounding on his knees, making grunts and groans; he said that a woman sitting nearby alerted a flight attendant that he needed medical attention.

On Sept. 19, 1955, Garner and his trio were performing at the Sunset School Auditorium in Carmel, California, when Garner’s longtime manager Martha Glaser noticed a tape recorder rolling backstage. It had been placed there by a sound engineer for Armed Forces Radio; Glaser took the tape and shared it with executives at Columbia Records, who decided to release parts of it as “Concert By The Sea.” It became one of the best-selling jazz albums
of all time and clinched Garner’s reputation as an outstanding and important performer.

Garner died of lung cancer on Jan. 2, 1977, in Los Angeles. His body was flown to Pittsburgh for services at Spriggs-Watson Funeral Home in Homewood and at St. James AME Church in East Liberty. He is buried in Homewood Cemetery under a pink granite stone with a piano etched on top.

Glaser also had Pittsburgh roots, having been born in Duquesne. After her death in 2014, her estate donated the extensive Erroll Garner Jazz Collection (including some rare recordings of Garner at age 16) to the University of Pittsburgh’s Jazz Studies Program. In 2015, the late pianist and composer Geri Allen, who was then the director of that Pitt program, helped produce a newly digitized and remastered release of “The Complete Concert By the Sea.”

This article appears in the April 2020 issue of Pittsburgh Magazine.
Categories: Rick Sebak