This month ushers in the local season for watermelon, one of summer's most refreshing treats.

Gently sweet and deeply thirst-quenching, watermelon is essential summer eating. Now begins the peak season to find it locally grown, and just in time: Sitting in the shade to eat a few cool, refreshing slices can ensure happy survival during the dog days of August. Watermelon is the most-consumed melon in our country, and for the most part, we eat it fresh.

Although it has been cultivated through the ages-watermelon is native to Africa, and the Egyptians were eating it as long as 5,000 years ago-there are very few ways to transform it in recipes, perhaps because 90 percent of the fruit is water.

Watermelon rinds can be pickled, certainly, and the fruit may be salted or incorporated into such refreshing drinks as Mexican horchata or summer cocktails (see recipe below. But overall, there’s little to be done but eat as much as possible in one sitting and take up most of your fridge storing the leftovers.

The large, sweet watermelons we know today are the result of improvements made to the fruit primarily after its arrival from Europe in the New England colonies in the 1600s. Native Americans as well as the colonists immediately took an interest in the crop and bred for size and lack of bitterness.

In the centuries since then, a slice of the fruit, with its crisp, tender pink or red flesh with black seeds and marbled pale-green rind, has become an iconic American food. In a fascinating essay in Rooted in America: Foodlore of Popular Fruits and Vegetables, which details the cultural significance of watermelons, author Patricia A. Turner rightly points out how intrinsic the fruit is to summer merchandising. Slices of watermelon, along with white wicker furniture, breezy curtains and glasses of icy lemonade are images meant to put us in the mood to spend our way through hot weather: Look around, and you’ll see watermelon prints everywhere from bathing suits and toddler dresses to picnic ware and beach towels.

Of course, the very best way to enjoy this fruit is by eating it. It’s good for you, too: The classic watermelon is dark red because of the cartenoid lycopene and is in fact a much richer source of this antioxidant than tomatoes. Check with grocers who stock local produce or at farmers markets during August to find fruit from regional growers, who this month and next will harvest everything from huge, striped watermelons that weigh 20 pounds or more to smaller 10-pound varieties such as Sugar Baby. 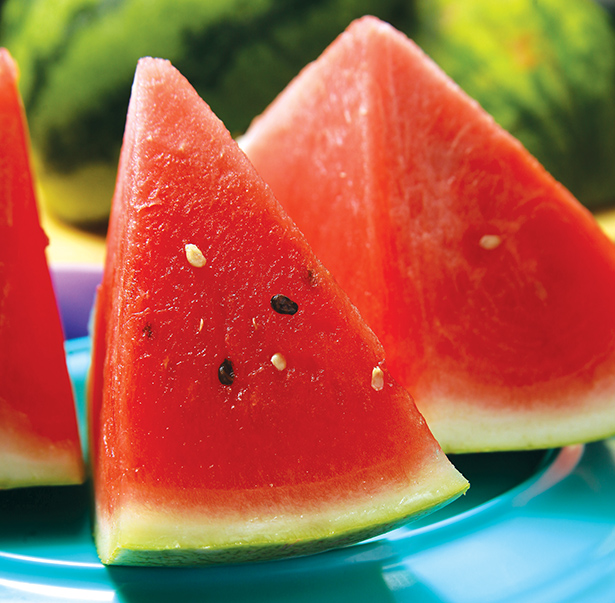 As you’ll see after just one trip to a local farmers market this month, summer’s ultimate refresher comes in all sizes. There are huge 30-plus-pound watermelons and cute, smaller varieties that weigh10 pounds or less.

In addition to the classic type dotted with shiny black seeds, there are many "seedless" varieties (these actually contain small, undeveloped seeds and were first bred in Japan in the 1930s). The fruit can be round, oblong or elliptical, with the outside color varying from solid dark green to mottled or striped green to nearly white.

What’s most important? Selecting for ripeness and getting them as fresh as possible from the field-read on for more helpful hints.

Shop Local: You’ll find freshly picked watermelons at many local farmers’ markets this month, including at the Farmers’ Cooperative Market of East Liberty (344 N. Sheridan Ave.; open Saturdays 5 a.m.-noon). There, growers including Zang’s, Kennedy’s and Kistaco Farm will offer varieties such as Sugar Baby, a comparatively small type weighing between 8 and 12 pounds with soft, sweet red fruit and a dark-green rind; Yellow Baby, also miniature in size but with soft, golden-fleshed fruit that works especially well in cocktails and smoothies; and Crimson Sweet, a larger watermelon between 20 and 25 pounds with sugary bright-red flesh.

The watermelon season in the region starts this month and stretches into September.

Select for Ripeness: At peak ripeness, the patch on the bottom where the watermelon rested on the ground will be yellow instead of white or pale green. Look for a dull, waxy bloom rather than a very shiny skin. It’s a good sign if the watermelon has a nice symmetrical shape and feels heavy for its size. Another option, although not always foolproof, is to try knocking on the watermelon. A solid thud indicates the melon is ripe; a hollow sound indicates it’s still got a way to go.

Support Farmers: The watermelon, Citrullus lanatus, is a different species than other types of melons like cantaloupe or honeydew, which are both cucumis melo. That is partly why an organization of watermelon farmers is working hard to have the FDA place the two fruits in different food-safety regulation categories: While food-borne illness outbreaks have plagued such crops as cantaloupe, leading to strict (and sometimes costly for farmers) rules regarding crop management, watermelons are among the safest and most contaminant-free types of produce. To support the farmers’ cause with a letter to Congress, visit nationalwatermelonassociation.com.

This article appears in the August 2010 issue of Pittsburgh Magazine.
Categories: Eat + Drink Features, From the Magazine