Surprise Guest: Jay Leno Grabs a Slice and a Soda in Dormont

The former host of the “Tonight Show” was in Pittsburgh over the weekend for a performance at Heinz Hall. 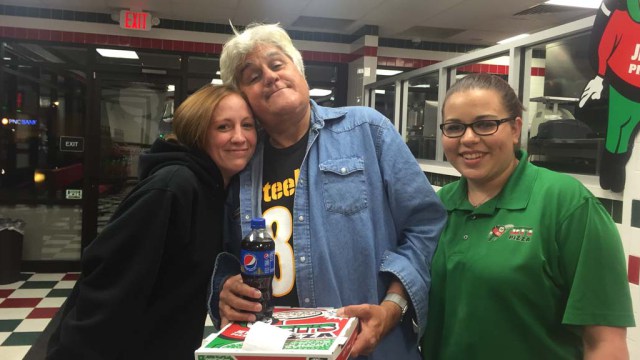 Performing stand-up comedy can give you an appetite. Jay Leno was apparently hungry after his performance Saturday night at Heinz Hall, and rather than order room service or have someone fetch him a sandwich, the former host of “The Tonight Show” decided to take a quick drive to Dormont in search of pizza.

Around 11 p.m., he walked into Jet's Pizza on Dormont Avenue wearing a Steelers jersey with a denim button up shirt.

“I wasn’t 100 percent sure it was him, but when I took his order at the counter, he gave his name as Jay. I asked ‘Are you Jay Leno?’ and he said ‘Well, I was when I woke up this morning!’” said crew member Bryana Zembroski.

The employees said Leno was friendly and approachable. He joked with the staff and posed for pictures before leaving with individual slices of deep dish pizza with pepperoni and a soda.

“We’ve had a lot of excitement in the past month at our store,” said manager JoAnn Liebro. “In February, we were robbed at gunpoint and now, just a few weeks later, we have a celebrity sighting!”