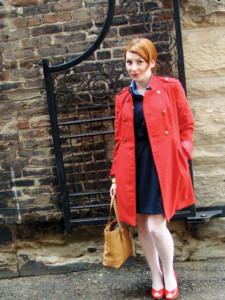 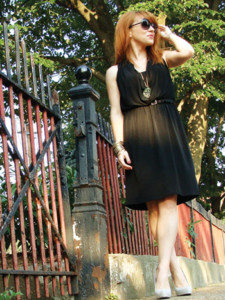 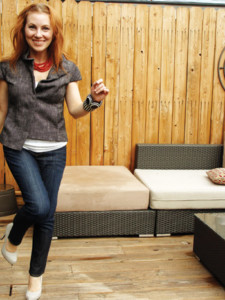 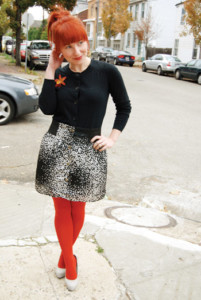 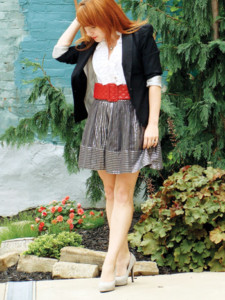 Terra McBride is on a style quest … and she’s taking the world along for the ride. McBride, a redhead with a vibrant personality, produces one of Pittsburgh’s most popular and fastest-growing style blogs, “Stylish White Female.”

“SWF” is a journey into McBride’s daily fashion choices, spiced with thoughtful musings on Pittsburgh-life in general. As opposed to a fashion blog, which reports on fashion happenings either locally or on a grander scale, SWF is a “personal-style blog.” It’s totally McBride—every skirt, scarf and earring—and her fans love it that way.

Born and raised in Meadville, Pa., McBride is now head over high heels for Pittsburgh and likes to include an urban ’Burgh feel in her photos.

She’s not a model, and her photos are not shot by a pro. Most often, they are taken by McBride. Walking through downtown or another local neighborhood, she sets up her tripod, clicks the camera’s self-timer, poses and shoots. “I get a lot of stares, but often, people will come up to me and offer to help,” she says.

After choosing the best shots, McBride will occasionally find a use for the worst. “Sometimes I post the most ridiculous ones to Facebook or Twitter. I’m by no means perfect.”

McBride posts her daily style choices under the heading “Daily Duds” and a weekly posting “Community Choice,” where readers decide what she should wear. “The interaction with the readers is one of my favorite parts of doing the blog.”

McBride says Pittsburgh has a style scene that’s becoming more prominent and easier to find. “Part of the reason I blog is to showcase [small boutique owners] and support what they do. My love for style and Pittsburgh is what SWF is all about.”

This article appears in the January 2011 issue of Pittsburgh Magazine.
Categories: Style

You Can Explore Pittsburgh's Underground Railroad with New Tour

You Can Explore Pittsburgh's Underground Railroad with New Tour