Pittsburgh Opera will debut its first world premiere, a story with local ties, in “The Summer King: The Josh Gibson Story.” 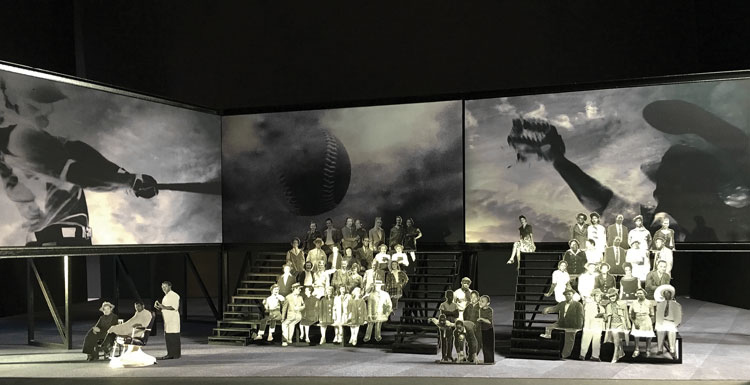 When people hear the name Josh Gibson, they might recall him as the greatest baseball player of all time. They might remember a larger-than-life story about a 580-foot home run at Yankee Stadium. They might recognize a son of Pittsburgh.

What might not necessarily come to mind is the term “tragic hero,” a line often used to describe a protagonist in an opera.

There’s a first time for everything.

Pittsburgh Opera this month will present the first world premiere in its 78-year history: “The Summer King: The Josh Gibson Story,” about the famed Negro Leagues player who faced adversity at nearly every turn.

“As a baseball fan, the story of the Negro Leagues always spoke to me pretty loudly and captivated my interest,” says the show’s Maine-based creator/composer, Daniel Sonenberg. “The aspect of the injustice of segregation certainly was compelling. When it came to writing an opera, [Gibson] spoke to me as a tragic figure.”

Born in Georgia, Gibson grew up on the North Side of Pittsburgh. He made his way into the sandlots at age 16, playing for multiple Pittsburgh amateur and semi-pro teams such as the Crawford Colored Giants. He became such a powerhouse for the Homestead Grays (with a .461 batting average his rookie year) that many consider him to be baseball’s greatest home-run hitter or even the greatest player of all time. But he never made it to the big time, dying of a brain tumor at age 35, three months before Jackie Robinson broke the color barrier into the major leagues in 1947. Gibson posthumously was inducted into the Hall of Fame in 1972.

Certain aspects of Gibson’s short life, such as the death of his young wife during the birth of their twins, allow for Gibson to become an operatic character, even if the story itself is atypical for the opera genre. So much so that when Sean Gibson, Josh’s great-grandson, met Sonenberg and heard of his project back in 2007, he couldn’t believe it.

“I was shocked. Of course, my family was shocked,” says Gibson, executive director of the Josh Gibson Foundation, which provides youth athletic and academic programs. “I was in my 30s when I went to my first opera. There’s not a lot of African-Americans that go to the opera.”

The goal is not only to present Pittsburghers with a story that they know and love but also to show them that opera is more open-minded than some may assume.

“The stereotype is that opera is this 19th-century Italian-European art form that doesn’t really speak about issues that are important. None of that is actually true, but we need to constantly find ways to break through that stereotype to tell our audience that there’s all this amazing creativity going on in the opera world,” says Pittsburgh Opera General Director Christopher Hahn. After watching a workshop presentation of the piece back in 2014, he says he knew “The Josh Gibson Story” was a perfect fit for the Pittsburgh stage.

The hope is that the strong statement of Gibson’s story will draw people in. Alfred Walker, the actor set to portray Gibson, believes that will be realized.

“It’s a story. We all know how the story ends. Josh Gibson never gets in the major leagues, and this was unfair that you had possibly one of the best baseball players to ever live and not get the recognition,” Walker says.

Opera-goers will watch the hometown story with the backdrop they see in their day-to-day lives. Projections and video will be used in lieu of large, structural pieces on the stage in order to suggest the cast is moving from place to place.

​Sonenberg says the message is simple: “It’s that while Josh was not really a crusader for social change, he fought with his bat. What he did was he made the white owners aware that it was competitor suicide not to hire black players.”

​Sonenberg adds it was the skill of athletes such as Josh Gibson that broke down the color barrier, even though Gibson himself wasn’t the one to do it.
Producers hope his story will keep breaking more.

“The Summer King: The Josh Gibson Story,” Benedum Center, 237 Seventh St., Downtown; 412/456-6666, pittsburghopera.org; April 29-May 7. The Josh Gibson Foundation will host a fundraiser after the matinee on May 7 at the August Wilson Center for African American Culture.