Spotlight: Going Back to the Plant at The Carnegie Museum of Art

An in-depth Carnegie Museum of Art exhibition of photography by Gordon Parks brings Pittsburghers inside a bustling grease plant — where your relatives may be waiting. 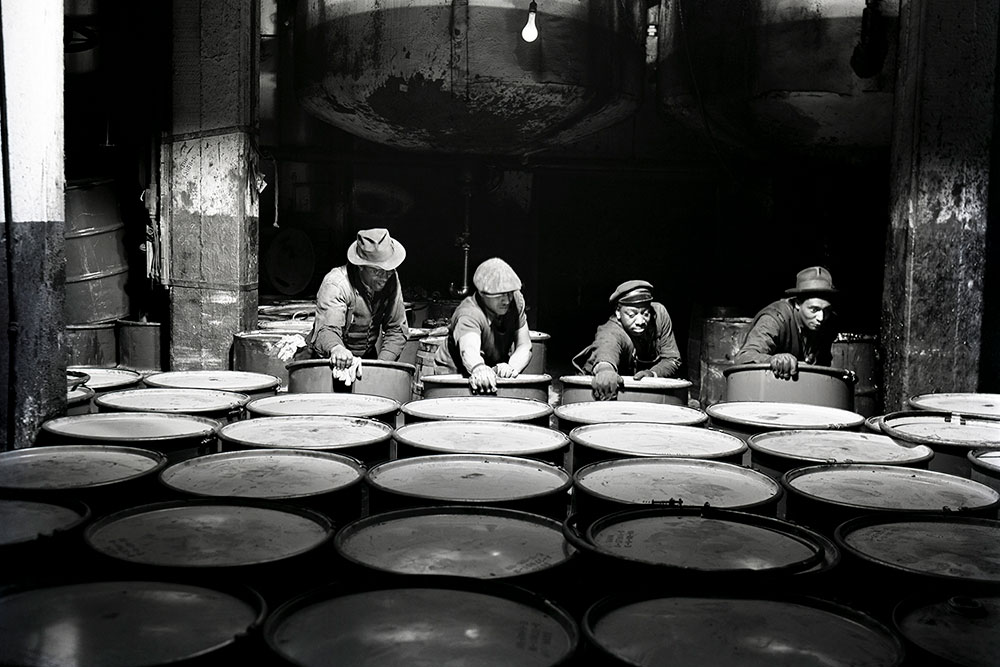 A little less than 80 years ago, renowned photographer Gordon Parks made a trip to Pittsburgh to take pictures of workers inside a sweltering, bustling grease plant along the Allegheny River.
The photos Parks took captured the difficulty of the work and quietly illustrated persisting labor divisions, including those that ran along racial lines. The faces of the hard-working Pittsburghers in these images are tired and dirty, doused in sweat and grease.

This, however, was no exposé — at least not intentionally. Parks was on a commercial job, sent by the company itself. Now, the photos are the subject of “Gordon Parks in Pittsburgh, 1944/1946,” an exhibition at the Carnegie Museum of Art.

In 1944 and ’46, Parks was hired by the Standard Oil Company to photograph its Penola Inc. grease plant, as the company hoped to highlight the tireless, essential work its employees were completing in support of the war effort. The plant manufactured a specific type of grease needed for contemporary war machinery; Standard Oil looked to Parks, with his great eye for compassionate, human-focused photography, to show the men behind the labor. 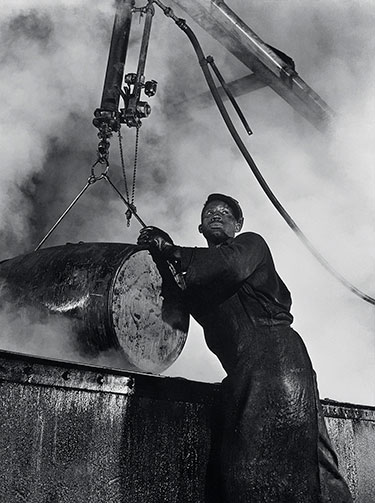 “While the pictures were certainly intended as a work-for-hire marketing tool to try and humanize this corporation, what you’re also seeing is the evolution and maybe even the establishment of Parks’ humanist style,” says Dan Leers, CMOA’s curator of photography. “In part because of his upbringing and his background, he’s particularly sensitive to the role of individual experience in telling a story.

“He [said], you can shed more light on a person’s character by photographing them in their work surroundings.”

The workers in Parks’ photographs — often dramatically framed by almost theatrical clouds of steam — may be tired, but there’s a palpable sense of blue-collar determination in their steely gazes.

“You do see a great deal of pride and camaraderie in this plant,” Leers says. “It’s dangerous, it’s difficult and it’s hot — but also it’s contributing to American military success overseas.”

It’s possible, though not likely, that some of Parks’ subjects may survive to this day; while the youngest workers in the photographs would have to be more than 90, Leers says a connection could be made.

“It is our sincere hope that visitors to the exhibition will enjoy finding their friends or family members — or even themselves — in this exhibit. We, as stewards of this work and curators of this exhibition, can learn more about who these people were and what the conditions were like” if subjects or their descendants visit.

The exhibition comes at a time when the nature of work, and the inequities inherent in labor, are once again front-of-mind for many Americans. “Many of the questions and issues Parks was addressing persist to this day,” Leers says. “We want to be a site for conversations about that.”

One such conversation will take place on May 19, when CMOA holds a talk and reception celebrating the launch of “Gordon Parks: Pittsburgh Grease Plant 1944/46,” a new produced in partnership with the Gordon Parks Foundation. The book features more than 100 previously unpublished Parks photographs and contributions from Philip Brookman, LaToya Ruby Frazier, Mark Whitaker and Leers; the latter two will attend the event to discuss the book and exhibition.

An additional event, “In Conversation: Neighbors,” will specifically explore the process and implications of finding family and community members and histories in museum exhibits and archives. The event, which will be co-hosted by BOOM Concepts and facilitated by co-founder D.S. Kinsel, will take place on May 26; both events are scheduled for 6 p.m. and are pay-what-you-wish (museum admission is a separate fee; galleries will be open late for visitors to see the exhibit).

The latter event will look not only at Parks’ work, but that of Charles “Teenie” Harris, another photographer who chronicled everyday life in Pittsburgh. The similar subject matter makes for a natural connection — but, at least for a moment, there was a direct link between the two acclaimed artists.

“In the exhibition, we have a portrait of Gordon Parks standing in the printing plant of the Pittsburgh Courier — [taken] by Teenie Harris,” Leers explains. “What an amazing moment in the history of photography: These two titans were in the same room, exchanging ideas and taking one another’s photos.”

This article appears in the May 2022 issue of Pittsburgh Magazine.
Categories: From the Magazine, Things To Do