In “Searching for Home”, Seattle-based wood sculptor Humaira Abid explores the challenges faced by women and children refugees around the world. 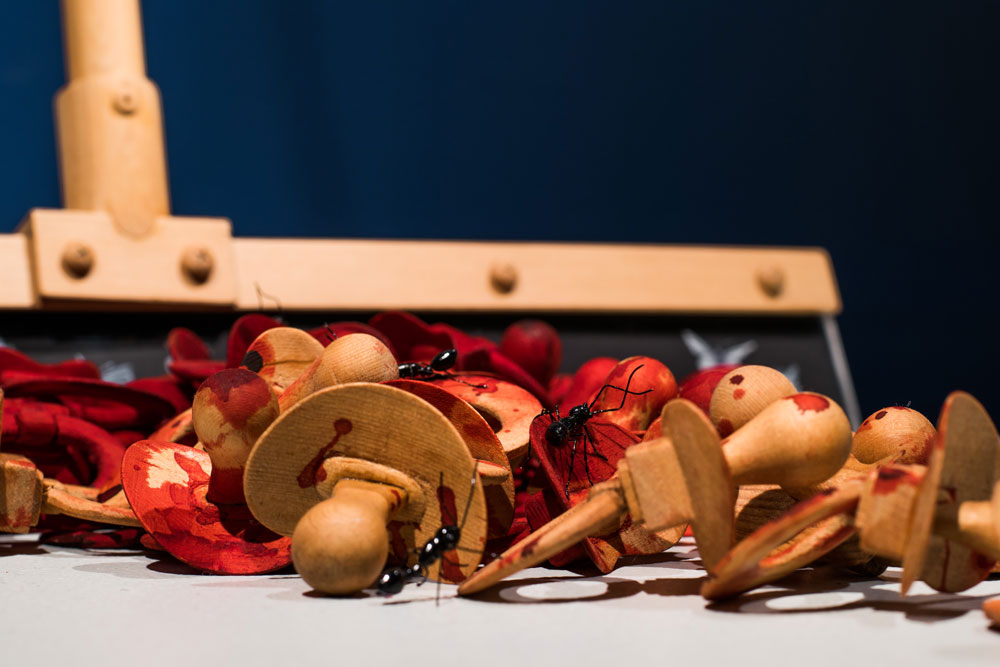 “THE STAINS ARE FOREVER” | PHOTO BY EMILIE SMITH

The stains don’t just wash away.

The color that stands out amidst the natural wood in sculptor Humaira Abid’s exhibit, “Searching for Home,” is red. It’s seen on a love letter, on children’s shoes and on a piece of underwear hanging on a barbed wire fence, representing blood spilled during bombings, during Taliban attacks, and as part of childbirth and a woman’s menstrual cycle, all a part of life for refugees around the world.

“Searching for Home,” on display at Contemporary Craft through Aug. 21, is full of heartbreaking depictions of what it’s like to be a woman or child on the run, from bullet holes carved into the wall to bloody pacifiers.

Abid, a native of Pakistan, grew up in a region of the world with a large number of refugees; her own parents were refugees from India.

Abid moved to Seattle in 2008, but whenever she visited Pakistan people referred to it as her home, so she started thinking about that concept. She made one trip there when her father died, but she had also just given birth to her daughter. As she traveled by herself with a breast pump, and was frequently questioned about it and made to go through extra security, she started thinking about what refugees, particularly women, face at the moment they are forced to their homes.

She started crafting suitcases, an obvious image for a journey, but kept them closed since she didn’t know what women took with them. She carved one tied sack from pinewood after noticing refugees carrying them in photos. 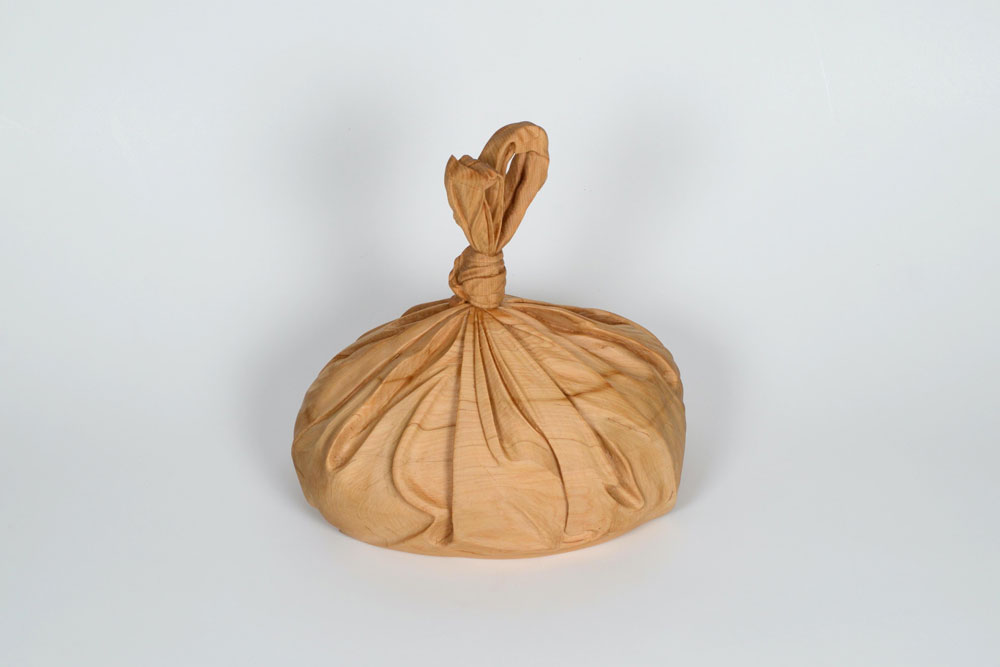 Abid began visiting women in refugee centers in Seattle and Pakistan, and they told her they could usually grab only the basics when forced to flee — a toothbrush, clothes, their passport, and sometimes a family heirloom.

Only one suitcase in the resulting piece, “Searching for Home,” is open; a carved picture frame featuring three children rests inside.

“All of my installations tell … some story or stories of refugees that I gathered or I learned about in this process,” Abid says. 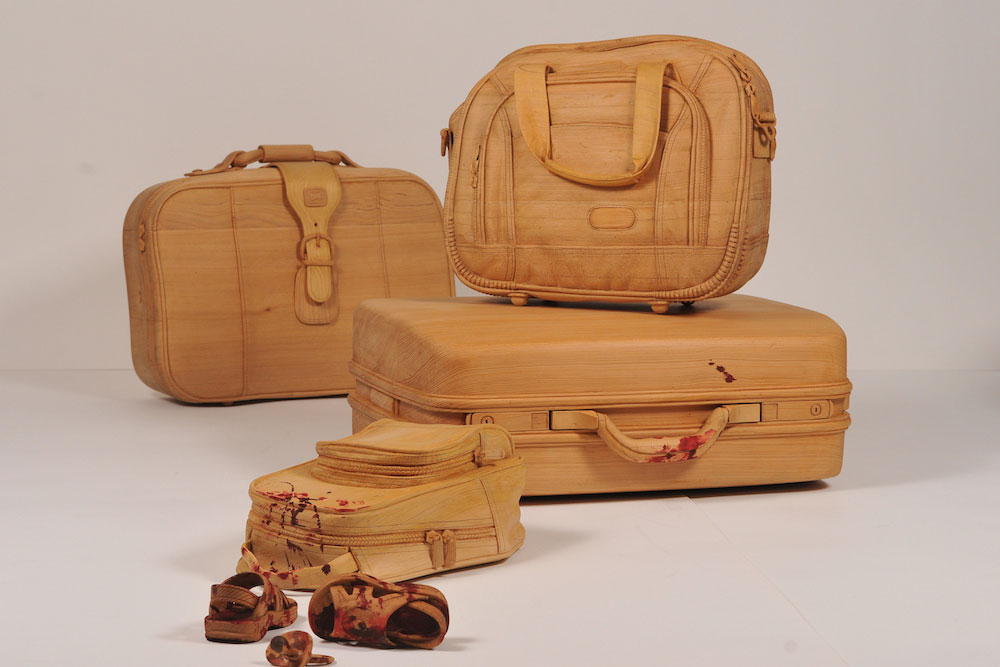 In one refugee center, Abid met a woman who was married as a young teenager in Zambia to a man who said he would let her continue to attend school. Instead, she had three children in quick succession. When she stood up for herself, the man took the children to America, leaving his young bride behind and taking her passport with him.

The woman realized her passport was expiring, so she applied for a new one, followed her family, got her children back and sought refuge at a shelter before she received aid through the Refugee Women’s Alliance in Seattle, where she eventually met Abid. She went back to school and became a nurse.

“She’s living a good life now,” Abid says, noting the woman was never bitter about what happened to her. “Whenever I meet her, it gives me so much happiness.

“FRAGMENTS OF HOME LEFT BEHIND” | PHOTO BY MATTHEW TALLORIN

The entire exhibition started with a small piece of barbed wire that, of course, was carved from wood.

The resulting 30-foot-long mahogany fence, indistinguishable from actual barbed wire unless you’re examining it very closely, is the first thing you notice when you walk into Contemporary Craft.

“When she came to us, she spent a couple [days] gluing pieces,” says Kate Lydon, director of exhibitions at Contemporary Craft, noting a small sample of the fence is available for visitors to touch. 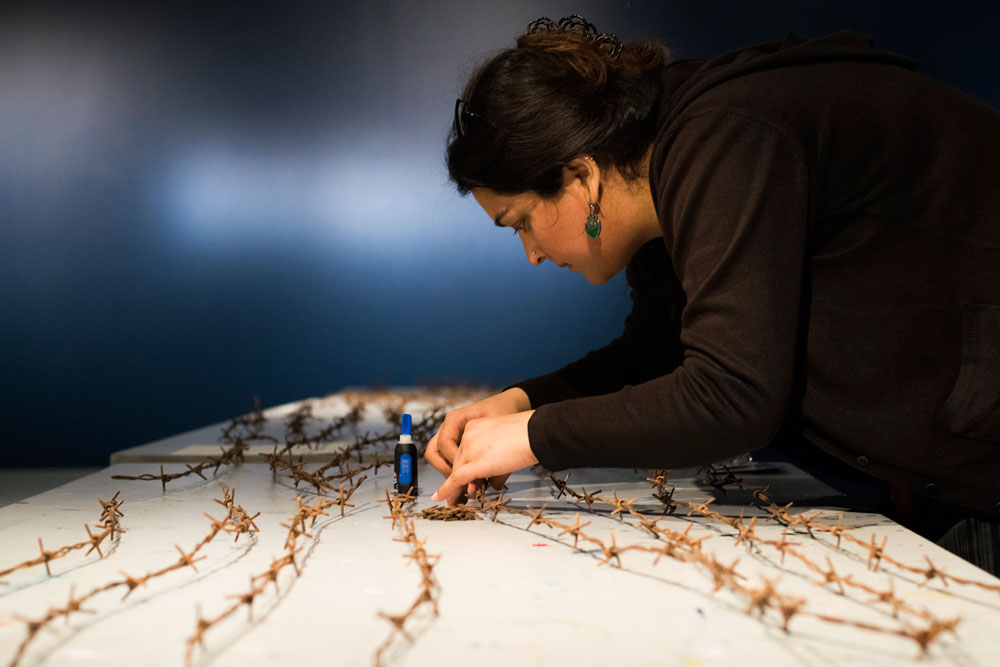 Unmissable in the center of the fence is the pair of stained underwear, also carved from wood. The piece, entitled “Borders and Boundaries,” took Abid three years to finish.

Barbed wire “stands out to me because it reminds me of borders and boundaries and limitation and restriction,” says Abid.

Abid’s own daughter appears in another piece: she’s painted in a scene on a wooden swing that hangs over a pair of red shoes. Abid created “The World Is Beautiful, and Dangerous Too” after a school in Pakistan was attacked by the Taliban.

“There are schools here being attacked as well, so it can happen anywhere, and people can see, ‘Oh, yeah, this can happen to my child or even myself,’” Abid says. 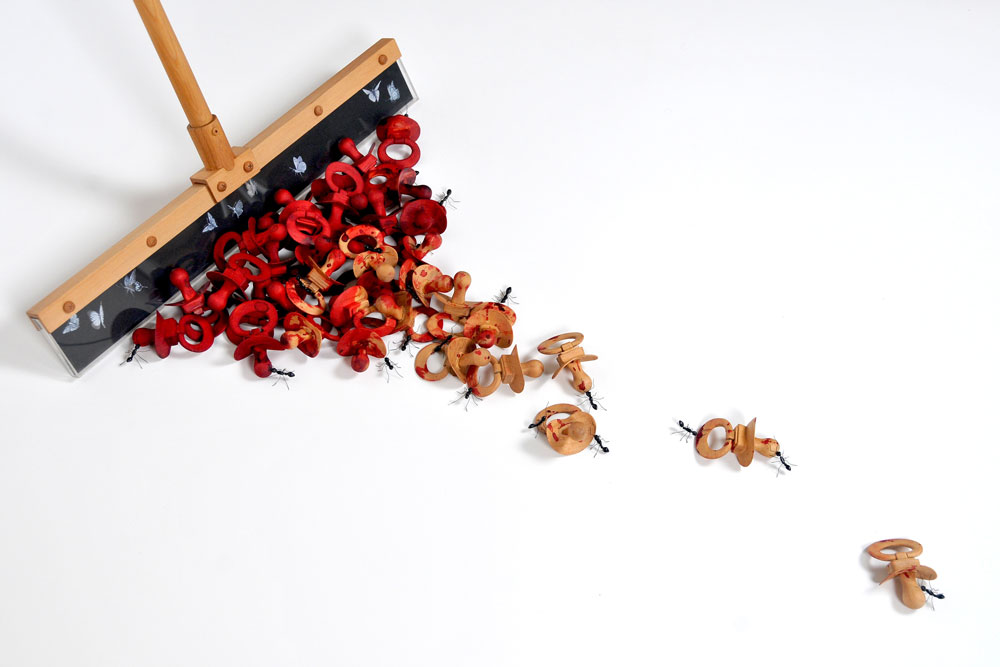 “THE STAINS ARE FOREVER” | PHOTO BY ADEEL AHMED

Abid based another piece off of the 2014 school bombing in Peshawar. “The Stains Are Forever” features a large broom sweeping up 39 pacifiers, representing the average length of a woman’s pregnancy. One hundred and forty-one people were killed and 114 were injured in the attack, and afterwards workers attempted to mop up the blood stains.

“There’s a lot of heavy things here, but I think the importance is awareness building,” says Lydon. 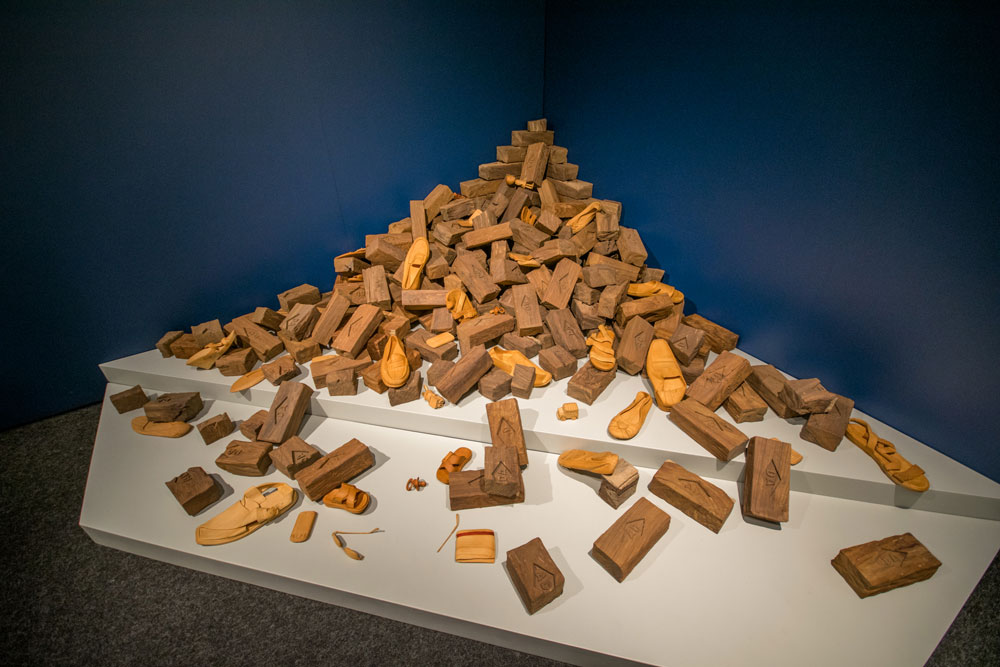 “THE WORLD IS NOT PERFECT” | PHOTO BY EMILIE SMITH

Another poignant piece, “The World Is NOT Perfect” consists of a large pile of bricks — carved from mahogany — from a crumbled building interspersed with shoes, broken glasses, cell phones and pacifiers.

Displaying “Searching for Home” in 2021 ended up being fitting for Contemporary Craft, as it’s celebrating its 50th anniversary in a new space in Upper Lawrenceville, a move that was delayed due to the pandemic.

“We feel honored to be here, and it’s been a long road for us to get to our new home,” says Lydon.

The next exhibition will be “Food Justice: Growing a Healthier Community through Art”; it will open in September.
Up next for Abid? The artist says she has plans for a spinoff of “Searching for Home”; there’s more she wants to explore on the topic.

“This is an ongoing issue that hasn’t received a resolution or the attention that it should,” she says. “I also want to explore the issues of detention centers — many women are being raped and molested and no one is really talking about it. That’s why I want to do more work on the issue and include the stories which are not being given importance or not enough discussion is happening.”

This article appears in the July 2021 issue of Pittsburgh Magazine.
Categories: Arts & Entertainment, Things To Do