"We Are the Global Majority" features powerful pieces from 30 women artists who identify as bi/multi-racial/cultural, immigrant or descendants of immigrants. 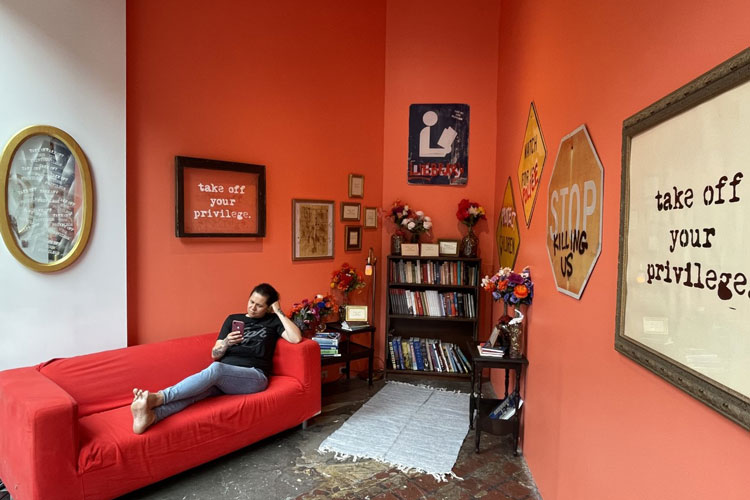 They won’t be silenced anymore.

“We Are the Global Majority Decolonizing Space,” an exhibition curated by #notwhite collective, opens Friday night at Space Gallery, marking the official reopening of Cultural District galleries and the kickoff of the Three Rivers Arts Festival.

For the 13-member, all-women, all-Pittsburgh-based #notwhitecollective, which launched in 2016, it’s an exciting time.

“We were supposed to open this show in November,” says collective member Fran Ledonio Flaherty, who emigrated to the United States from the Philippines when she was a teenager.

“It’s the first time ever Space Gallery is hosting an exhibit of 30 women of color, so that’s very exciting, and being a part of the reopening of the Pittsburgh Cultural Trust is also very exciting.”

When the collective started planning this show, members reached out to 17 other artists across the country to be a part of it. “We Are the Global Majority” is made up of women artists who identify as bi/multi-racial/cultural, immigrant or descendants of immigrants. 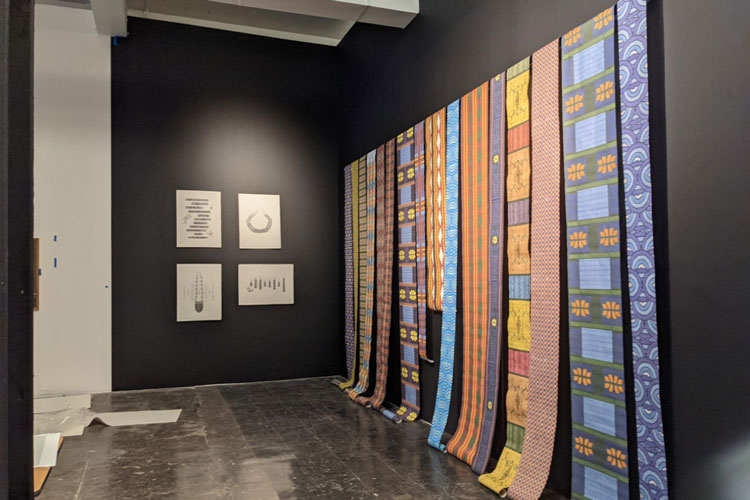 Flaherty’s work, “Global Patterns (2021)” is a series of 16 scrolls made of digital print and acrylic on rice paper representing ancient Philipino tattoo patterns. The work, a collaboration with Alaskan artist Melissa Shaginoff, hangs dramatically along one of the exhibit’s back walls.

The show is an opportunity, Flaherty says, for the members of the collective to express themselves, when for most of their lives they were taught not to speak up against societal prejudices because they were simply part of life.

“It’s all so well-ingrained in the system,” Flaherty says. “It’s legislated, it’s cultural, [it’s a part of] law enforcement, the criminal justice system. We just think it’s what it’s supposed to be. But here we are, 30 of us, trying to filter out the muck.”

Collective member Alison Zapata, a second-generation Mexican-American, has included two works in the show as an homage to her grandparents. Her Italian grandmother is featured in “The Deeper Root (2021)”, featuring the woman next to a young Alison with a poem painted behind her and salvia plants at her feet, representing her love of gardening. “The Eternal Bond (2021)” features Zapata’s Mexican grandfather — who came to Pittsburgh not speaking any English to work laying railroad ties — surrounded by his grandchildren.

“I’ve been really digging into my family’s roots and looking at people’s life stories and different generations’ sacrifices — my grandparents’ sacrifices for me to be where I am,” Zapata says. 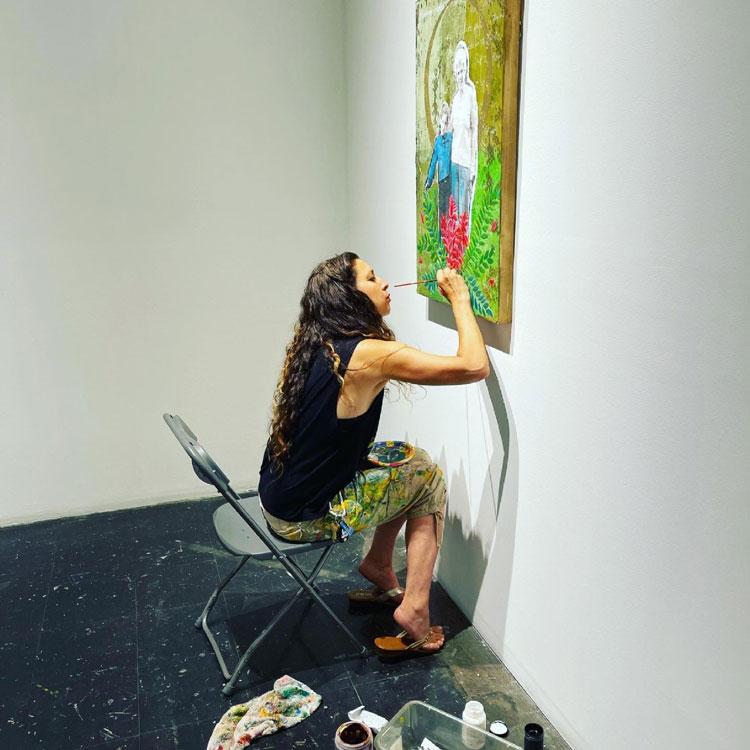 In the context of the exhibit, the artist says her work represents “that global process of people uprooting themselves out of their countries, and most of the time it’s not out of choice, it’s to survive.” And it’s something she’s thankful for, she says.

She also hopes her work will speak to the commonality we all share. If we can look at our own family’s stories and struggles with compassion, she says, “perhaps we can be more compassionate for those human beings [who are living their stories in present-day] and their children’s lives as well.”

Another must-see work is “I am speaking/We are speaking (2021),” by Sarika Goulatia. The 60-inch-by-60-inch archival print features a hoodie sweatshirt with those words in the center.

Three works by Pittsburgh-based multi-disciplinary artist Amber Epps are equally poignant. The first, set off in its own room and visible from the street, is called “Take off Your Privilege (2021).” The words appear on two mirrors that face one another and in frames around the room. A library symbol street sign hangs on the wall with the word, “Liebrary” painted on it. Below is a bookshelf filled with American history books, which often ignore or rewrite non-whites’ roles.

On the opposite wall, there’s a framed Constitution marked with Epps’ blood. It’s called “Birth of a Nation.”

“[White] people say: ‘This is our country,’” Epps says. “Well, we didn’t choose to be here, but it was our sweat, blood and tears that created what we have now.”

Epps also has “EYEDNTCCLR (2021),” in the main exhibition room; it’s a display rack like any you’d see in an eye doctor or pharmacy filled with glasses. Many of the frames are painted over with the words: “Don’t See Color.”

Finally, she offers “Decolonization Stations (2021).” Two chairs with clear hoods like those you’d see in a beauty salon sit on opposite sides of a column; one is marked for Whites and one marked for Not-Whites. When you sit in the chair marked for Not-Whites, you press play on a tablet and hear words such as: “You are enough” and “Your life matters”. When you sit in the chair marked for Whites, you hear: “Black lives matter,” “Everyone has an accent,” “Jesus is not white,” and “No, you cannot touch my hair”.

Above the chairs is a donation box because, Epps says, “change starts here.”

Flaherty says some visitors have already had visceral reactions to this piece, and Epps says that means they should figure out why it’s triggering to them or think about how triggering it is to live the life of a non-white woman. 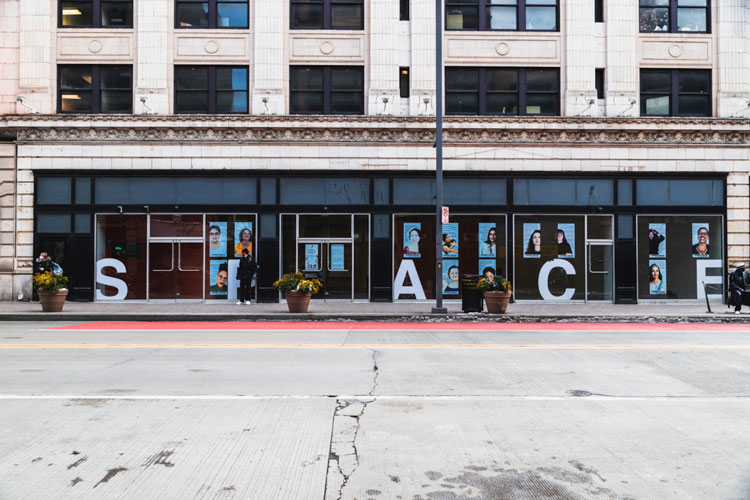 Flaherty says triggering pieces of art aren’t meant to be attacks on people, they’re defining the systemic prejudices that exist.

That’s especially important in Pittsburgh, a city consistently billed as a “livable” and friendly city but also one of the worst cities for Black residents in areas from quality of life to poverty to lifespan.

“We’re deeper in the water,” in terms of not wanting to recognize problems in the system, Flaherty says. “We’re in it. We’re so in this muck.

“But this beautiful thing is there’s still some sunshine, some clarity to it. We try to find that bright spot and lift each other up.”

Other exhibitions launched Friday as part of the Cultural District’s reopening include “Power Pixels 2020” at Wood Street Galleries, “N.E. Brown” at 707 Gallery and “Rising Voices: The Bennett Prize for Women Figurative Realist Painters” at 937 Gallery.