Plus, un-discombobulate yourself with this week’s men’s hockey schedule in Eastern Standard Time. 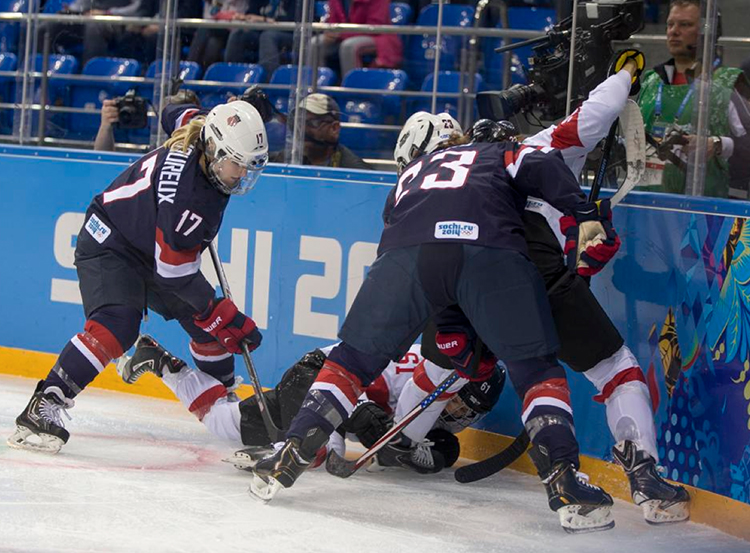 SPOILER WARNING. This post contains information about events that happened this morning in Sochi. You have been warned.

Before the men’s hockey tournament in Sochi has even begun, a serious on-ice rivalry is developing in the women’s competition — and it’ll almost certainly lead to a huge showdown later in the games.

Entering the final preliminary game, both the United States and Canada had dominated the competition. The U.S. opened the games by beating Finland 3-1 before taking target practice in a 9-0 victory over Switzerland; meanwhile, the Canadians didn’t allow a goal in their first two games, beating the Swiss and Finland 5-0 and 3-0, respectively. So this morning’s U.S.-Canada showdown was chiefly for seeding in the medal tournament — but it also served as a likely preview of the gold-medal game.

After a deadlocked first period, Team USA’s Hilary Knight struck in the second period with a power play goal. Canada’s Meghan Agosta-Marciano evened the score early in the third, however, and her teammate Hayley Wickenheiser gave Canada a go-ahead goal on a play that saw U.S. goalie Jessie Vetter seemingly stop the shot; Vetter lost control of the puck, which trickled over the line just fragments of a second before the referee’s whistle.

Canada held on to win the opening-round showdown 3-2, giving them the top seed in the medal tournament. Because of a new format this year, both teams will get a bye to the semifinals; Canada will face the winner of a first-round matchup between Switzerland and either Sweden or Russia, while the U.S. will almost certainly have a rematch with Finland. Barring a huge upset, the gold medal game will be a rematch of this morning’s contest.

Next up for the U.S. is that semifinal matchup, scheduled for noon EST on Monday (Canada’s semi will take place that morning at 7:30). That game will also be Robert Morris grad Brianne McLaughlin’s best shot at entering the competition, as starting goalie Vetter may be rested for some or all of the semifinal in preparation for the gold medal game. (At this point, though, no promises; the accomplished McLaughlin does appear to be the third-stringer on this squad.)

In the meantime, the men’s tournament begins later today; all four Penguin-bearing squads (again: the U.S., Canada, Russia and Finland) drop the puck Thursday. We’ll return Friday to look at the roles of the seven Penguins in Sochi and update you on the U.S. women’s semi opponent. In the meantime, here’s your schedule of men’s hockey for the preliminary round, mercifully in Eastern Standard Time. Games featuring Penguins are in bold.