She is Robert Morris University's Colonial Ace on Ice

RMU women’s hockey star Brittany Howard is racking up points and school records — and could lead her team to an NCAA title. 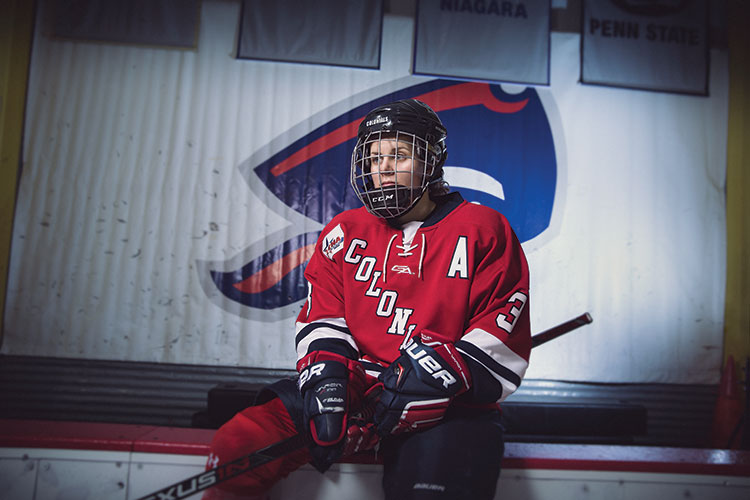 In speaking to Brittany Howard, standout forward for the Robert Morris Colonials women’s ice hockey team, it is clear she is a lifelong hockey devotee. She talks with the polished, quiet intensity of an NHL veteran, clearly having taken cues in both demeanor and philosophy from some of the game’s greats.

That is, until the prospect of potentially representing the Canada on a future Olympic roster is broached. At that point, she can’t help but break into an excited, hopeful grin.

“I’m just trying to play the best I can here,” she says, returning to the one-game-at-a-time script common among stars of the rink. “Obviously, if that’s an opportunity [I have,] that’s great. But after college, I definitely want to keep playing, whether it’s with [the Canadian Women’s Hockey League] or overseas.”

The redshirt junior from St. Thomas, Ontario, is compiling an undeniable resume in her second full season (having missed all but two games of the 2014-15 season with a knee injury). As of Jan. 12, Howard led the Colonials with 35 points through 20 games. Her 22 assists also topped the team’s totals, while she shared the goals lead, at 13, with standout freshman Jaycee Gebhard.

In less than two full seasons, Howard is within a few well-timed passes of becoming the Colonials’ all-time leader in assists — a feat she should complete soon after press time — and has moved into the fifth spot among the university’s career points leaders.

On the heels of a Dec. 30 hat trick against Brown, Howard was named the College Hockey America (CHA) player of the month — for the second consecutive month.
Howard attributes her impressive stats to her teammates. “I’ve played with some great players here,” she says. “Without [them], I wouldn’t be in the situation that I am.”
Modest or not, Howard has emerged as the standout among standouts on the Colonials roster — a development Head Coach Paul Colontino attributes to work ethic.
“She puts the work in every single week,” he says, “so she is a better player on the ice when it comes time to play each weekend. She’s just hungry. She wants to be out there — and she wants to be the best she can be.”

The 2016-17 season could mark a significant step forward for the RMU women, who have claimed the CHA conference title only once, in 2012. With more than half of the campaign in the books, the Colonials are ranked seventh in the NCAA, remain undefeated in conference play and have suffered only one loss overall; meanwhile, none of their CHA rivals holds a winning record as of press time. 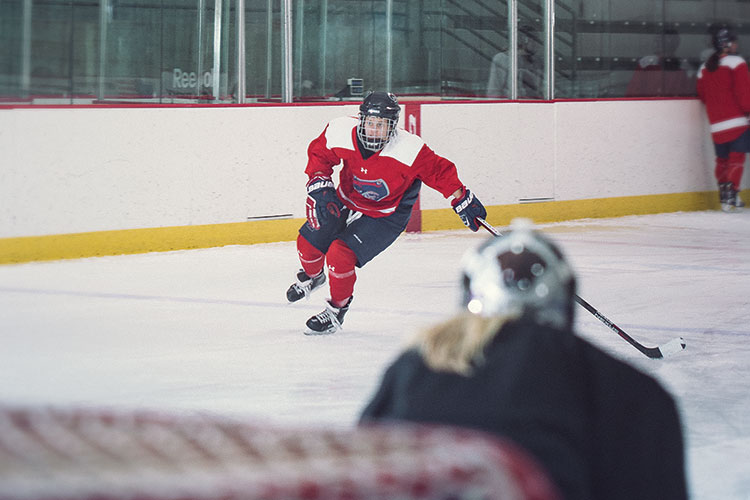 Barring upset in the CHA tournament, then, the Colonials could claim their second conference title. The difference this year: For only the third time, the CHA championship carries with it an automatic bid in the NCAA Tournament.

The Colonials have never competed for a national title.

And yet, “I think it was a goal of ours from the beginning of the year,” Howard says. “But each weekend, we go in and focus on that weekend. It’s obviously an end-of-the-year goal. But each weekend is important.”

The Colonials’ last 12 games are all inter-conference tilts, so there’s plenty of hockey yet to play — particularly in a small league (in addition to Robert Morris and RIT, the CHA hosts Penn State, perennial powerhouse Mercyhurst, Lindenwood University and Syracuse University). The intimacy of the CHA makes for heated competition;

“Every game is a bit of a rivalry game,” Howard says.

Regardless of how far this season extends, Howard is a hockey lifer, thrilled to be playing and eager to improve. Her love of the game is something of a defining characteristic, obvious even from a brief conversation — or a glimpse of her darting across the ice.

And local fans need not worry about her allegiances. While the Toronto Maple Leafs always will come first in her heart, Howard can’t fully resist the lure of the Pittsburgh Penguins.

This article appears in the February 2017 issue of Pittsburgh Magazine.
Categories: From the Magazine, Sports