Rosemary Welsch, longtime DJ and senior producer at WYEP-FM, has shepherded the station from startup to institution. 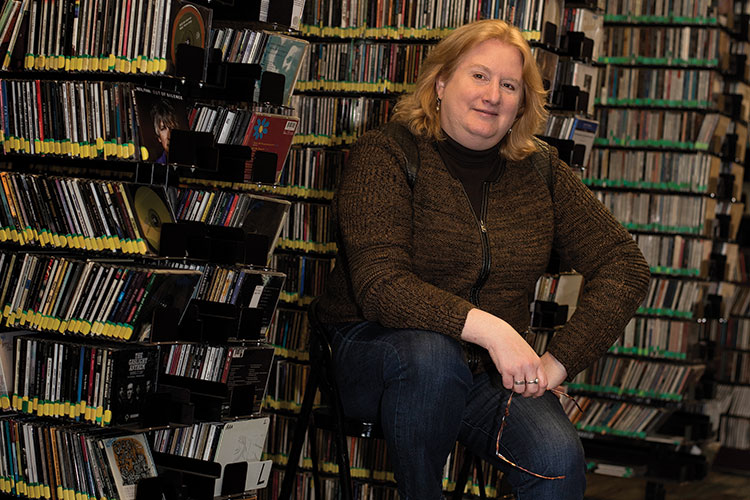 When Rosemary Welsch signed up to volunteer as a host for a fledgling radio studio, she didn’t expect a musty Oakland basement with mushrooms poking through the carpet. Fortunately, the then 22-year-old wasn’t deterred by her surroundings on that fall day in 1981.

She put on her headphones, leaned toward the microphone and introduced herself to the listeners of WYEP-FM.

The voice coming over the airwaves would be unrecognizable to music fans today. She has become known for her voice — so soothing it’s been described it as “dipped in honey” — but she didn’t start out that way. Early-years Rosemary Welsch was grating to the ears — nasal, high-pitched and monotonous. “Like a flatline on a heart monitor in the ER,” she says.

She had signed up to host a show called “Womyn to Womyn,” viewing it as an opportunity to let go of a long-buried personal secret. “I was looking for a way to come out. I was very shy,” says Welsch. Radio also allowed her to tap into her lifelong love of music. “The two parts of me came together,” she says.

She grew up alongside the station, helping to shape it into the force it is today — and disproving her mother’s sensible advice: “You can’t make a living playing music.” Thirty-seven years later, Welsch not only serves as the host of “Afternoon Mix,” she is also the senior producer of WYEP, an independent, non-commercial radio station known for its adult-alternative format.

In the male-dominated world of radio, she checked off a list of firsts — she was the first paid host at WYEP, the first female solo host of a morning-drive program in Pittsburgh and one of the few female program directors in the country, a job she held from 1995 to 2007.

“If Pittsburgh has radio royalty, it would be Rosemary Welsch,” says Dinah Denmark, a former WYEP host who looks to Welsch as a mentor. “She is far and away the best radio producer and personality in Pittsburgh. When you’re listening to Rosemary, it’s like you are sitting in the living room playing music with a friend.”

You can teach a radio host technical skills, but you can’t teach them how to connect with the audience, says Peter Rosenfeld, former board president of WYEP. “She speaks to listeners in a personal way. She always had that gift.”

On a dreary Pittsburgh day, in a fully modern control room, Welsch looks over her playlist for the afternoon. Then, at exactly 2 p.m., she’s on the air. “There is a sun up there somewhere. One of these days we are going to see it,” she says, kicking off the show.

She hits a button on the control panel to start her playlist — “Feed the Fire” by Dawes. A few songs later, Courtney Barnett’s “Crippling Self Doubt and A General Lack of Confidence” comes on.

“A man would never write this,” she says. Off the air. 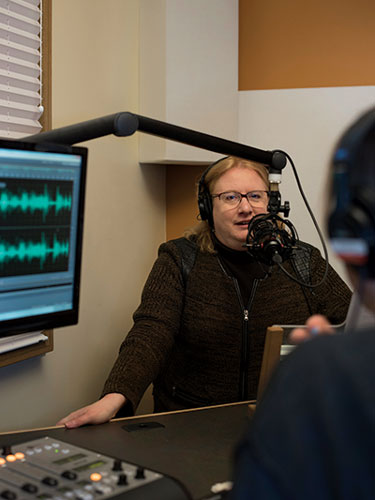 Welsch remembers when every show involved a team of volunteers lugging 40 vinyl records from their homes to the station and then scrambling to line up every song. At that point, the all-volunteer station was a mishmash of programs — and it was losing listeners. During her nine years as a volunteer, Welsch joined the board, which voted to yank the dying station off the air in 1985. After revamping the format and securing stable funding, WYEP was resurrected two years later.

As a radio host, Welsch had to develop a thick skin. On her first day, a listener called in and said, “Nothing personal to you, but everything you are playing is shit.” It was the first song she had ever played as the new morning host — and it wasn’t even over yet.

Soon after, one woman called to complain that the music was too loud. Welsch put her on hold, only to field a call from a man who said, “You’re putting me to sleep.”

Then there were the warring factions — one group wanted more popular hits, while others would rather the station stay away from chart-toppers altogether. It’s a battle that has calmed considerably (though it remains a perennial debate).

But after decades of playing music, Welsch has learned that there are many reasons why people respond to music the way they do.

One of her favorite parts of the job is interviewing musicians — everyone from Patti Smith to Bonnie Raitt to David Byrne. She’s fascinated by musicians and their creative process when writing songs, something she admires greatly but can’t do herself.

As she puts it, “I don’t play any instruments. I play radio.”

House of the Week: Newly Renovated Home on Mount Washington