#Shalieve in Love: An Exclusive Look at the Shaziers’ Wedding

Ryan Shazier and wife Michelle Rodriguez never lost faith that they’d get their dream day. A year and a half after the Steelers linebacker suffered a severe spinal injury, he danced at his wedding.

Five years ago, Michelle Rodriguez was a young woman in Texas who had never heard of Ryan Shazier, then a recently drafted linebacker for the Pittsburgh Steelers.

While on Instagram one day, Michelle “liked” a cute picture of a baby on her Explore page. She thought nothing of it.

But that cute baby’s father, Ryan, noticed a beautiful woman had liked a picture, and it caught his attention as it wasn’t one of his more recent posts. He decided to message her.

She waited a few days, then decided to respond, and a friendship began.

“We started off messaging each other by sharing … passages from the Bible,” Michelle says. “We weren’t going into it like, ‘Oh. This could be my boyfriend.’”
But intended or not, a relationship blossomed long-distance.

In April 2016, Michelle was accompanying Ryan to Arizona where he was training. One morning after his workout, he told her he was going to play golf with teammate Stephon Tuitt.

“That whole day Ryan was acting really weird, and I was like, ‘What is this guy up to?’” Michelle remembers. “He left me at the house all day. I was by myself, and I was like, ‘Dude, are you going to come back?’”

Ryan called and told her he wanted to go out for a nice dinner, and Michelle, who says she hates getting dressed up, tried to talk him out of it. He eventually convinced her, came home, and the two got ready.

While waiting for their table at the restaurant, Michelle noticed a girl posing for pictures under a tree. The photographer told Ryan and Michelle he was just starting out in his career and would love to practice with a few photos of them under the tree as well. Once they were in position, Ryan got down on one knee.

“I was in complete and utter shock,” Michelle says. “That whole time, he had it set up that that photo shoot wasn’t for them, it was for us.”

Within a few months, the couple had planned their wedding. They wanted to hold it in Miami, as Ryan is from Florida and Michelle has family in Puerto Rico, just a short plane ride away. Michelle had a wedding planner, a dress and a caterer picked out. Everything was set for July 7, 2018.

But then came Dec. 4, 2017, when the Steelers met the Cincinnati Bengals. Ryan went in for a tackle — and didn’t get up again. He had a severe spinal injury.
It’s now a well-known story. The man who had already inspired people by being open about his alopecia — a condition that causes bald spots and the disappearance of body hair — and supporting numerous charitable endeavors underwent extensive surgery.

And started getting better.

He entered UPMC’s Rehabilitation Institute and was discharged on Feb. 1, 2018, and transitioned to an outpatient therapy program. Within a few months, he was out and about without his wheelchair.

Michelle says there was never any doubt whether or not they’d get married, but they both realized the logistics were probably going to change.

“We had a long talk … at Mercy, because I stayed with him at Mercy every night … and he was just like, ‘I don’t want to look back at my photos and be in a wheelchair. This is supposed to be one of the happiest days of our lives, getting married, and I don’t want to look back and think, if we had waited a little bit more, I would have been a lot better and I would have been on my feet, walking, dancing, jumping.’”

They decided to postpone the July date. But another surprise was yet to come. In July 2018, Michelle and Ryan announced on Instagram they were expecting. Their son, Lyon, would be born in January. 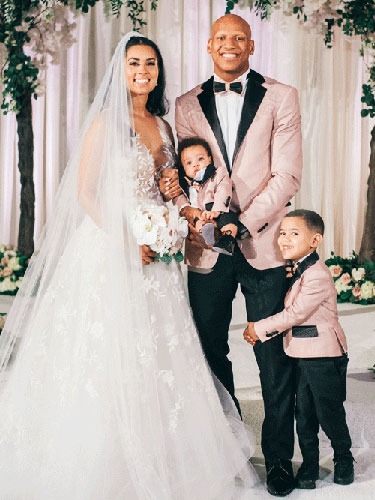 It was around that time they again began planning a wedding in earnest. They were tired of waiting, and they decided to hold the celebration where it seemed to make the most sense: Pittsburgh.

Michelle enlisted Alexis Allen, a wedding planner with {SHE} who’s married to former Steelers safety Will Allen, with a seemingly impossible ask: Can you plan a big wedding in less than three months?

Allen says she didn’t hesitate to take on the task. In fact, she was “beyond honored” they thought to include her.

“They have a network that is broader than most people’s, and the fact that they trusted me … with one of the most important days of their lives, meant more to me than they would ever even know,” she says.

“It’s been amazing, and as a woman of faith to see how his faith has driven both of them … It’s really touching, personally, professionally, in so many ways.” 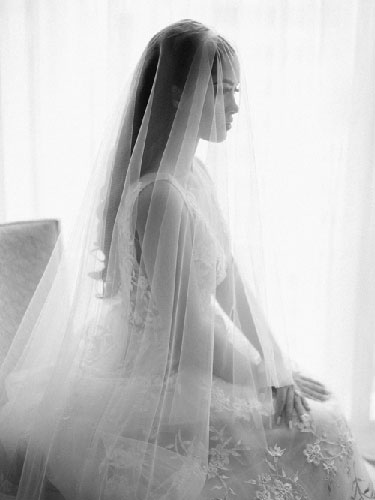 Originally, the couple planned to be married at a friend’s private estate, but with the date set for May, Allen says they worried about the possibility of rain. Instead, they booked The Pennsylvanian, Downtown for May 3.

Michelle planned to wear a light, flowing Oscar de la Renta gown with hand-painted flowers and a matching veil she had purchased from Ever After, a high-end boutique in Miami.

Ryan went to work on his tux, which he kept secret from Michelle until she walked down the aisle. Allen connected him with David Alan, a designer originally from the South Hills, to create something in line with his logo: a picture of a lion. Ryan previously had worked on a shirt for Shop412 after his accident with the lion and the word #Shalieve — a hashtag that represented his recovery process and all of his fans’ support; a portion of the proceeds benefited spinal research as well as the Boys & Girls Club of Western PA.

“I told him … I wanted it to be like a different type of suit, but I wanted to be able to have my logo on it, the lion,” Ryan says. “We had just talked it over, and then he sent over a bunch of different options and he showed me that one and I thought it was just like a perfect fit.”

Equally important was matching his sons, Ryan Jr. and Lyon.

“It was kind of cool to be able to incorporate both of them and have them together; it was kind of amazing,” Ryan says. “I thought it was a perfect moment and perfect to have it together, because we’re a family, so just a way to have our family tied in all together.”

Michelle says her favorite part of the day involved 4-year-old R.J., who snuck behind the curtain as she was preparing to walk down the aisle.

“I saw him, saw his suit, and he came up to me and said ‘Mimi!’ And I just started bawling,” she says, noting they were happy tears. “I was just like, ‘Oh my gosh, it’s happening.’ When he had rushed and gave me a hug, I was just like, this moment has come.”

Allen says having guests mingling and having fun was at the center of her plans for the celebration. “From day one, what was really important to Ryan and Michelle was they were bringing together so many people from different points in their lives,” Allen says. 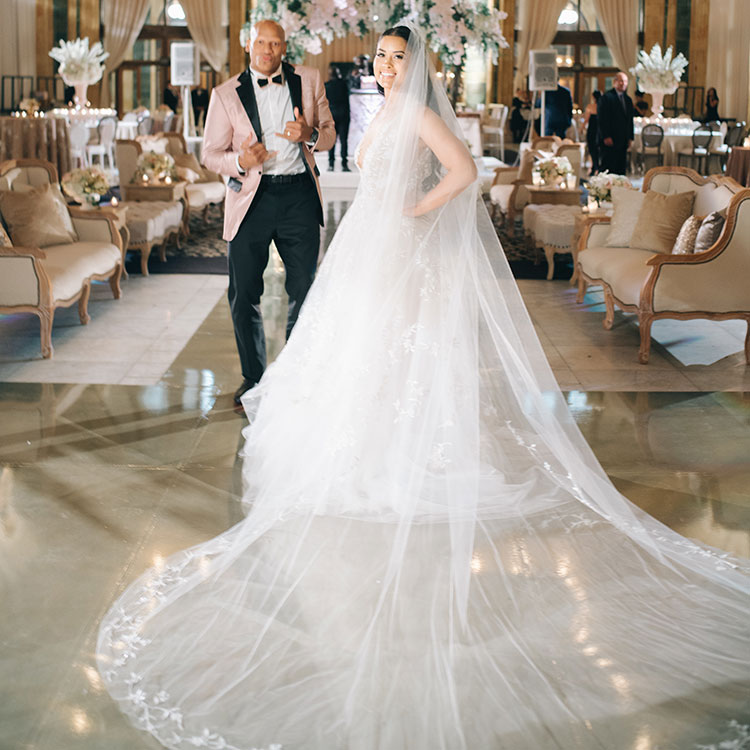 Both of the couple’s families as well as Ryan’s friends and teammates from The Ohio State University and the Steelers were on the guest list, so Allen made a bold move at the couple’s request: There was no seating chart.

“What I think was really cool was to have a client have those thoughts [to have everyone mingle] and see how it played out,” Allen says. “I heard people say after, ‘Oh, I was talking to their neighbor,’ or they said, ‘Oh. I met your cousin.’ ‘I met your agent.’ It was really cool for them all to get together.”

Because of the celebrity presence — in addition to current and former Steelers, Steelers minority owner Thomas Tull and his wife Alba and Joe Manganiello and Sofia Vergara were in attendance — Allen says she took precautions to protect guests’ privacy, including confiscating phones at the door to avoid photos being leaked.

“Some people were like, ‘You’re kidding, right?’” she says. In the end though, she says a lot of guests, even younger guests, said they enjoyed being unplugged and in the moment for the entire night.

Another surprise during the evening included a first look for Ryan and Michelle of the reception space. For the ceremony inside The Pennsylvanian, Allen created a stage surrounded by cherry blossom trees.

When event staff flipped the venue from a ceremony to a reception site, the trees ended up surrounding the DJ booth, where Atlanta-based DJ Battle provided music.

Continuing the garden vibe, Allen created brushed champagne walkways lined with tables and lounge furniture through the space that led guests to the DJ and dance floor as well as food and drink stations.

“[It was] to make it feel like you’re progressing through the space, again, to make sure no one was standing in one place,” she says.

The space also included a 360 Degree Moxie photo booth. When guests stood on the platform to take photos, instead of a standard backdrop, the reception became their live backdrop.

“It was really fun for people to dance, and everyone was sent a file,” Allen says, noting it was pretty cool to see Sofia Vergara up there with her friends “letting her hair down a little bit.” 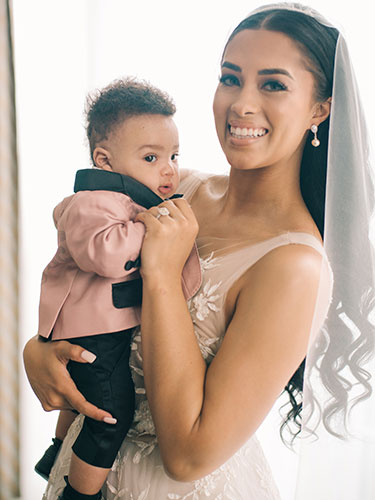 “It was very customized to be about them,” Allen says.

One of her favorite moments was watching Michelle, when all was said and done, taking over the DJ booth at DJ Battle’s encouragement, relaxed and letting loose.
“The day was really about her; she’s a bride,” Allen says. “It was fun to see her finally like ‘ahhhh,’ and be able to party.”

Michelle says she wanted the day to be not only about her and Ryan’s love, but also a celebration of Ryan, who not only got to stand at his wedding but dance as well.

“His mom gave a speech like, a lot of people didn’t think he was going to be where he is now, even doctors, so we wanted it to be not only a celebration of love and life but just him just getting better and the prayers are working and just a big party. I told [Alexis], ‘Let’s just have a big party. He’s not done yet. Ryan’s not done yet.’” 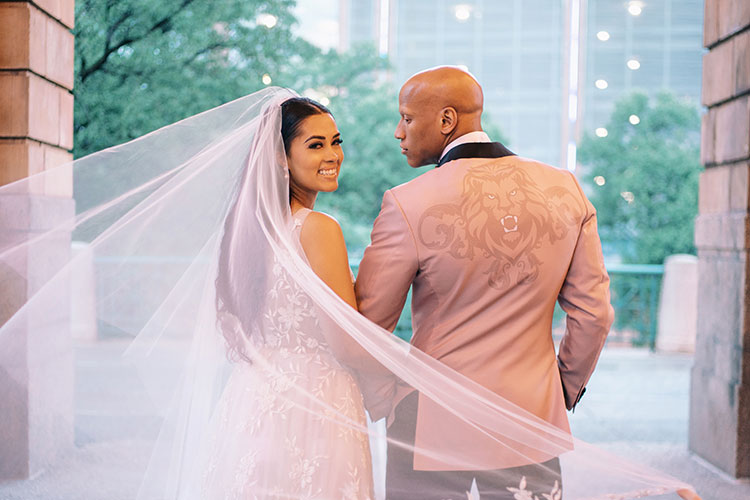 This article appears in the August 2019 issue of Weddings.
Categories: Bridal Buzz, From the Magazine, Hot Reads, Weddings