She secretly strikes Pittsburgh with random acts of kindness then documents them on one of the web's most fun, fascinating, inspiring sites.

CNN, Fox News, Huffington Post, Glamour.com … a lot has happened to the once-anonymous Secret Agent L since Pittsburgh Magazine first published our story about her (see page 2) in our July 2010 issue. On the 24th of that month Secret Agent L held a party at the Firehouse Lounge in the Strip District to reveal her true identity to her many fans.

In a dramatic entrance, music thumping, a spotlight shining on her back, the slender, 6 feet tall model/actress in secret agent-style trench coat, black hat and dark sunglasses walked through the parting crowd. On cue she turned, revealed, and was overwhelmed with warm applause and shouts.

At that moment, both nerve-wracking and exhilarating for her, Laura Miller did not imagine what her post-reveal life would become. Local television news was first to launch the wave of publicity. But it was a CNN interview on August 4 that brought worldwide attention.

“The public’s reaction has been absolutely incredible,” Miller says. “My website has gotten almost 100,000 extra hits since the August 4 CNN interview. It seems that every couple of minutes, someone is on the site,” Miller says. “Plus I’ve received well over 2,000 emails and only two of those emails were hate mail. Not too bad! The other emails were all from people wanting to become Affiliated Agents, people deciding to follow me on Twitter, or individuals just simply stating how much they love the project.”

At the “Hello SAL” reveal party, which donated proceeds to the National Alliance on Mental Illness, Miller revealed more than her own identity. She also singled out the person she calls her “Number 2,” the Robin to her Batman, friend and co-worker Vivian Lee Croft, who’s been helping Secret Agent L with her “missions” since the beginning over a year ago. At first, Croft wasn’t keen on the idea of giving up the anonymous nature of the project. “There was something about the anonymity that I particularly loved,” she said. “But the more we discussed the reveal and how it might help bring awareness not to the project per se, but the role of doing good things and doing them without the desire for reward, the more I came around to it.”

Croft says she’s “in awe” of what’s happened since the identity reveal. “Neither of us really had an idea of how much this project would blow up. It’s phenomenal but it also a little hard for me to wrap my head around,” Croft said. But she adds that it’s not the media attention but the personal element that’s moved her the most. “I’m most overwhelmed with all of the comments surrounding the need for something like this, for something so genuine that could put a smile on someone else’s face. To that I say, you don’t have to be involved with the project, just be a conscientious human being. When we hear from those who have been touched by one of the missions we or the affiliate agents have done, that is the most gratifying part of this project for me.”

Like Croft, Miller feels that the Secret Agent L project has given her more than she’s given others. “I can’t even begin to express how blessed I feel. I’ve met the most beautiful souls, I’ve had people share with me some pretty amazing stories about their lives, and I’ve been contacted by media outlets I never imagined would contact me,” Miller said. “And I even got to fly in an F-16 with the United States Air Force Thunderbirds. It’s like I’m living in a dream. But most importantly, it’s really shown me that there is some fierce love and kindness out there. We just have to open our eyes and hearts to give and receive it. And nothing, nothing tops that.”

In her original interview with Pittsburgh Magazine, Miller said, “I am in love with Pittsburgh in a way that I don’t think I can put to words.” On September 14 the City of Pittsburgh officially loved her back, officially proclaiming it “Secret Agent L Day” in the city she adores.

For the past year, Secret Agent L has engaged in “missions of anonymous acts of kindness” around Pittsburgh, leaving small gifts for strangers, gaining visitors to her websites and inspiring “affiliated agents” around the world.

So who is Secret Agent L, and why does she do what she does? We can’t tell you who she really is—yet. But her name isn’t important. It’s the Pittsburgh-people-loving person inside—and her selfless acts—that reveal who she truly is.

“I had no idea this was going to become what it is,” SAL says. “It started with a hydrangea flower that a friend and I left on a car windshield. 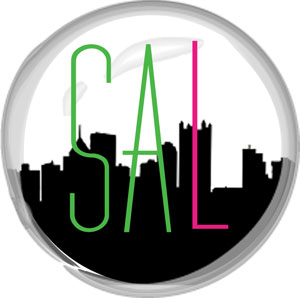 I thought how fun it would be to attach a little card, very secret agent-like. It just took off from there. I had this overwhelming sense of joy and connection to people I had never met and probably never will meet. It’s really powerful.”

Secret Agent L’s colorful, fun website documents in words and photos her missions at a variety of locations (libraries, retail stores, church) leaving small books, tickets to shows and, often, cards and notes. She loves the excitement of placing the gift, taking photos and sneaking away before being noticed—or before the gift is found. “I’ve never wanted to see who finds it; it’s more fun to imagine,” she says.

Her e-mail address is printed on the trademark card and note she leaves with each gift, and occasionally recipients will e-mail her with their reactions. These are the most powerful moments.

She describes the time she left a copy of Nancy Drew’s Guide to Life on a bench outside of Hillman Library on the Pitt campus, along with her card. “The woman who found it had just moved to Pittsburgh and was studying for the bar exam,” SAL says. “She e-mailed saying she was stressed and worried in a strange city, but when she found the gift she said, ’It proved to me I was exactly where I needed to be.’ ”

Some of SAL’s readers from around the world, including Canada, Germany and Finland, have joined her as “affiliated agents,” doing their own missions and sending photos and reports back to SAL. Companies have also noticed. SAL often uses cards and magnets from Quotable Cards and Compendium Products, and they have donated their goods, saying they love the way SAL uses them.

Anonymity has allowed her to take the emphasis off herself and to enjoy giving with clear selflessness, SAL says. So why give it up? Some of it has to do with Twitter.

“I am in love with Pittsburgh in a way that I don’t think I can put to words,” SAL says. “On Twitter I started talking with all these really amazing people that I want to spend time with. So to know that there are these people out there in our city that I can’t be with if I remain anonymous breaks my heart. It’s lonely.”

Send us your ’BurghBytes! Our area has an amazing tech and online community, and we’re telling the world in our column. Know something we should feature? An exciting new start-up company? An eclectic blog? An especially chic geek? Let us know! Send an e-mail to burghbytes@pittsburghmagazine.com.