Patti serves his La Prima espresso with a side of community. 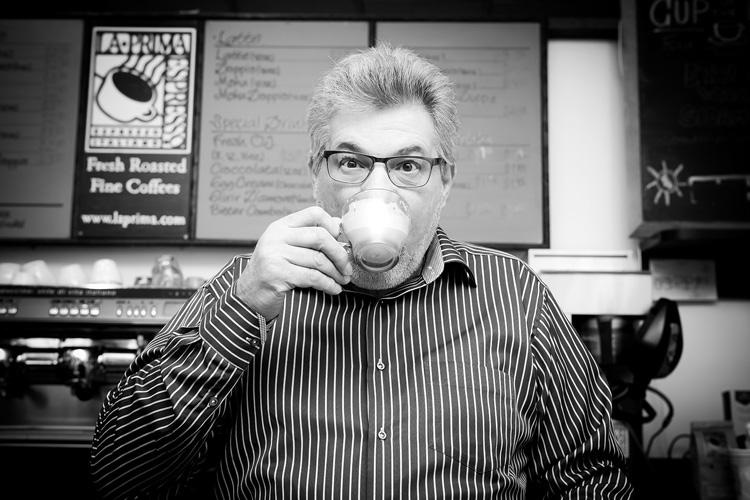 Sam Patti’s La Prima Espresso Bar is the caffeinated heart of Pittsburgh’s Strip District. The storefront on 21st Street, tucked around the corner from the hubbub of Penn Avenue, is where Patti, 68, oversees the most visible aspect of his business; it also includes a roastery in the Manchester neighborhood and coffee bars at Carnegie Mellon University in Oakland and Nova Place in Allegheny Center.
​
Pittsburghers of all ages, incomes and level of coffee-nerdiness meet there. “Isn’t it nice to go somewhere where you can connect with people? Where you feel comfortable? We have all sorts of people from all kinds of backgrounds visit us in the Strip. It’s not pretentious here,” Patti says.

La Prima’s origins begin with Pasquini coffee machines, a brand Patti first noticed while with his wife on a trip to Los Angeles in spring 1988. “We kept going to this place that made these wonderful cappuccinos like I’d had in Italy,” he says.

He was so taken by the quality of the espresso that he arranged to be the sole distributor of Pasquini machines in Pittsburgh. “I talked to 10 people about doing this. They all said I was crazy except for my wife and my dad.”

It was an unexpected twist in his life. At the time he figured he’d continue to teach Italian cultural studies, as he had at the University of Virginia. But espresso was another way to connect to his Italian heritage; Patti’s family emigrated from Sicily and Calabria, and he’s still very attached to his Calabrian relatives.

He’d have to leap a huge chasm, however, before he could sell any machines. This was October 1988, and coffee shops, especially those that specialized in fine Italian espresso, weren’t a thing. There wasn’t even a Starbucks in Pittsburgh at the time. “Since people weren’t familiar with these machines, I needed to have a showroom,” he says.

The showroom quickly turned into something totally different. The machines still were on display, but the space became a community hub for Strip District shoppers and vendors. “It morphed into a real live coffee bar,” he says.

Even in today’s booming climate of third-wave coffee shops, Patti’s La Prima stands out for its nod to the Old World; he still draws his espresso in the Italian style (a 1-ounce pull of 7 grams of espresso). And even though that pour is beloved by many, Patti says the sense of community he’s created is what keeps patrons coming back.

“All modesty aside, yeah. Having that attention to service has kept us around,” he says.

Peppers and Bread Crumbs
"This is a dish passed down from my Sicilian nonna (grandmother). For the most part these [family] creations date back to recipes brought to America from Italy. Today we still crave the several versions of peppers and bread crumbs we find on the table, both for the savory taste as well as for the savory memory they recall for us of our Italian heritage."

This article appears in the May 2016 issue of Pittsburgh Magazine.
Categories: Eat + Drink Features