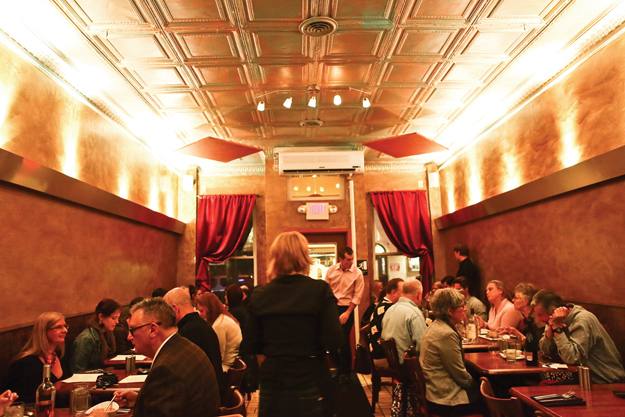 Root 174 to Host Pop-Up Restaurant
For those paying attention to the goings-on in the local food scene, pop-up restaurants (and beer gardens) are the latest trend. Taking it a step further, Root 174, operated by passionate chef Keith Fuller, is beginning to work with CRUX this Monday (and again Nov. 5).

A traveling pop-up restaurant established in Chicago, CRUX will be in the Steel City partnering with local chefs at their establishments, with the Fuller dinner being the first of several Monday night events (note: unfortunately, this Monday's event is sold out, but there are more to come). While in Pittsburgh, chef Brandon Baltzey of CRUX will call Root 174 his home base.

Because tickets sell out quickly for the CRUX dinners, we're giving you the lowdown now so that you (hopefully) won't have trouble snagging a few for the Nov. 5 "Waste Not, Want Not" dinner, which will be held at Root 174.

Oaks Theater Teams Up With Oakmont Bakery for Epic Brunch Event
What sounds better than brunch and a classic flick on a cool fall morning — especially when the food’s from Oakmont Bakery? (Yeah, we can't come up with anything either.)

Every month, the Oaks Theater screens beloved old films on the second Saturday, as part of its Cine Brunch program; the series, presented by the Oakmont Carnegie Library, provides foodies and film buffs with a prime opportunity to rave about their respective passions. Tomorrow morning, be sure to catch a screening of one of the greatest Hollywood musicals: Singin’ in the Rain.

Before the film, indulge in egg quiche, sizzling bacon, straight-from-oven bagels, doughnuts, muffins and other pastries. The best part (in our opinion, anyway)? A ticket for brunch and a movie is just $12. Just be sure to purchase tickets before arriving at the cinema.

Soergel Orchards Bakes Seasonally Inspired Doughnuts
Now that fall is in full swing, apples (plain or caramel), cider and other seasonal goods have been worked into our diets. And that's fine, of course.

Capitalizing on the interest in apple cider this time of year, bakers at Soergel Orchards whip up countless batches of apple-cider doughnuts (yes, they really do exist).

Small, sweet and dusted with sugar, the treats pair nicely with a mug full of java. And because they're relatively tiny, you won't feel guilty when you consume more than you had originally intended.

This article appears in the October 2012 issue of Eat Street.
Categories: PGHeats