Ron Molinaro is Dean of the Dough

The Il Pizzaiolo owner is two decades into his quest to perfect Neapolitan pizza. 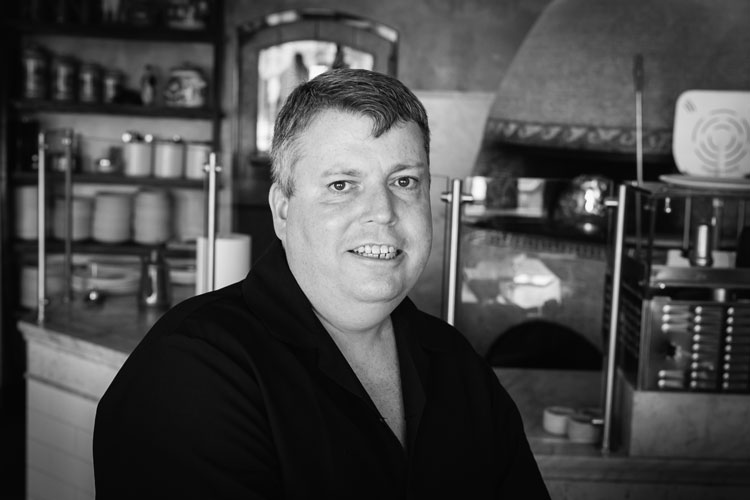 Ron Molinaro grew up eating generic American-style pizza. In 1990, however, the Pittsburgh native took a life-changing bite of Patsy’s (now known as Julia’s) pizza, the renowned neo-Neapolitan pizza restaurant located under the Brooklyn Bridge. “I never had real Italian pizza. It was the first time I tasted a pizza that was so pure,” he says.

It didn’t take him long to figure out that he wanted to join a small movement of people who were doing it differently. “At that moment, I knew what I wanted my pizza to be,” he says.

Artisan pizza was a dying art in 1990, and there was no internet to research and share ideas. In fact, Molinaro was only able to find one book — Evelyne Slomon’s The Pizza Book, published in 1984 — that could help him get started.

Instead, he ate his way around the New York and New Haven pizzerias that carried on the tradition; Lombardi’s, which reopened a few years after Molinaro’s conversion, had a significant influence on his style. Then he decided to return to Pittsburgh to pursue his passion. He built an oven in his parents’ yard and practiced. In 1996, he opened Il Pizzaiolo in Mt. Lebanon.

In 1997, Molinaro visited Naples for the first time. “I became solely focused on authenticity and using the best ingredients,” he says.

That’s important since Neapolitan pizza, in its purest form, has very few ingredients: flour, yeast, tomatoes, cheese, basil, olive oil and salt. Everything has to be perfect, particularly for an ingredient-obsessed chef such as Molinaro. Executing that ideal proved challenging. “Pittsburgh at the time was a wasteland for good ingredients,” he says.

He made weekly trips to New York to stock up on ingredients, especially mozzarella cheese. Finally, he found a steady stream of suppliers — he’s particularly fond of Gustiamo, a Bronx-based importer, and his weekly delivery of DOP buffalo-milk mozzarella from Caserta, Italy. Through that dedication, he built the best pizza in the region.

There’ve been a few missteps. A foray into Downtown in 2013 ended in bitter feelings with business partners. “I regretted it almost immediately. I felt like we started diluting what we had going on here,” he says, adding, “They always wanted to dumb everything down and cheapen the ingredients.

“I was ready to change this place to Molinaro’s and go bare-bones, old school, no phone. Luckily it all worked out, and I didn’t have to do that,” he says.

He found a new investor, opened two new Il Pizzaiolo locations — Warrendale and Glenshaw — and returned to Downtown with a Caribbean-themed establishment (Pirata) and a fast-casual concept called Pizzuvio.

“We have a lot of work to do to keep fine-tuning and refining all the elements of food, service and culture at our restaurants,” he says.

Which means that his quest for the best isn’t over. He’s in the process of turning Pizzuvio into his flagship, which will be called Il Pizzaiolo Downtown. There, he looks to elevate Pittsburgh pizza to loftier skies with a focus on Neapolitan “tecnica, passione e sapore.” He also will serve roasted meat, fish and a selection of house-baked breads.

“Even to this day we’re still trying to find a way to manipulate those ingredients in the best way possible,” he says