Katt Schuler serves West Virginia’s iconic pepperoni roll with a side of storytelling. 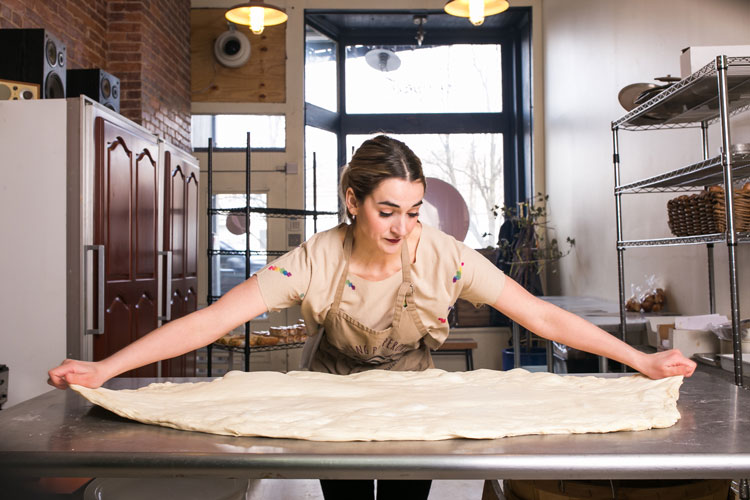 For Katt Schuler, baking pepperoni rolls carries more weight than simply the professional pride in making a tasty snack for pick-up at her Lawrenceville storefront (as well as distrubuting to more than a dozen locations around town). Sharing the quintessential prepared food item, which originated in West Virginia, through her business, Rolling Pepperoni, is an opportunity to bridge the gap between rural and urban divides.

“Where am I from? Who do I represent? I just kept circling back to the Appalachian culture,” says Schuler, who lives in Pittsburgh but grew up in Elkins, W.Va.

As far as iconic regional foods go, the pepperoni roll sits squarely on the simple end of the spectrum. It consists of a handful of thin slices — or a small stick — of pepperoni encased in a white-bread roll. Yet this straightforward snack, which is found all over West Virginia at gas stations, bakeries, church bake sales … and just about everywhere else food can be sold, represents how immigrants contribute to American food culture and, over time, can become an edible source of regional identity. 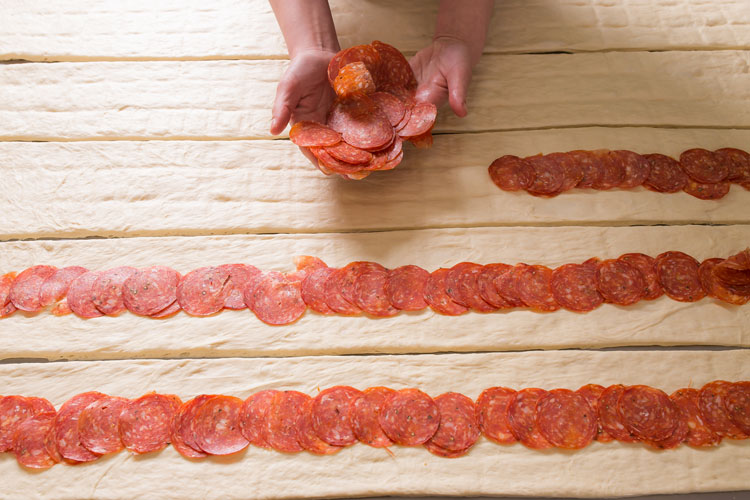 The pepperoni roll traces its roots to the foodways of Calabrese immigrants who moved to northern West Virginia in the early 1900s to find work in the region’s coal mines. The miners needed high-calorie, easily digestible food to keep them energized through long, brutal hours of labor. What they had on hand — loaves of bread, cured meats and pickled vegetables — fit the bill. Schuler believes that West Virginians didn’t create a hand-held stuffed roll closer in likeness to another historic miner’s food, the Cornish pasty, because, she says, “There wasn’t much fresh food once the mines were established in West Virginia. People abandoned their farms and ranches to go work in the mines with the promise of earning more money.”

A contemporary pepperoni roll is more or less the same as when Giuseppe Argiro first sold them commercially sometime around 1927 (the exact date is unknown) at his People’s Bakery in Fairmont, and, prior to that, the home kitchens of the miners’ wives. Unlike its near-cousins, calzones and stromboli, the pepperoni roll is free of other accoutrements. Its elementary makeup makes it shelf-stable and is part of its culinary appeal — as the pepperoni bakes, the fat and spices melt into and season the slightly sweet bread. It is, according to Schuler, “the cleanest, most honest and delicious piece of snacking that you can get.” 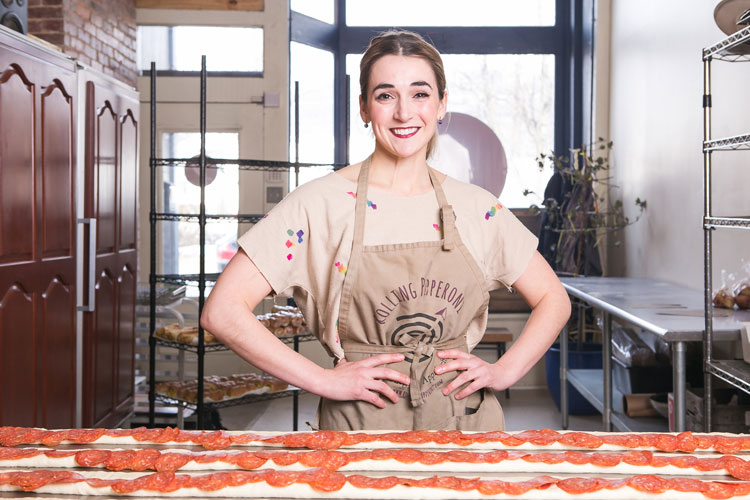 Schuler launched Rolling Pepperoni in 2016 with the intention of introducing a tasty and wholesome version of the iconic roll to Pittsburghers who might never have heard of it or, if they did, hadn’t eaten a good one. Despite our proximity to West Virginia, the pepperoni roll never caught on widely as a Pittsburgh dish. Sure, it’s sold at some local Italian bakeries and pizza shops, and sometimes makes its way onto the school lunch line, but its history, identity and culinary appreciation lie squarely with our southern neighbor.

Schuler wasn’t an experienced professional baker, so she experimented with friends — and, more importantly, their grandmothers — until she developed a bread she was happy with. Now, Schuler uses a poolish as a starter, and honey and olive oil to enrich the dough. She collaborated with Parma Sausage, the fourth generation Strip District charcuterie makers, on a custom pepperoni recipe. The roll has a slightly malty crispness, which gives way to a sturdy-yet-light, slightly sweet dough that is balanced by the rich pepperoni, which is flavored with paprika, garlic, fennel and black pepper. 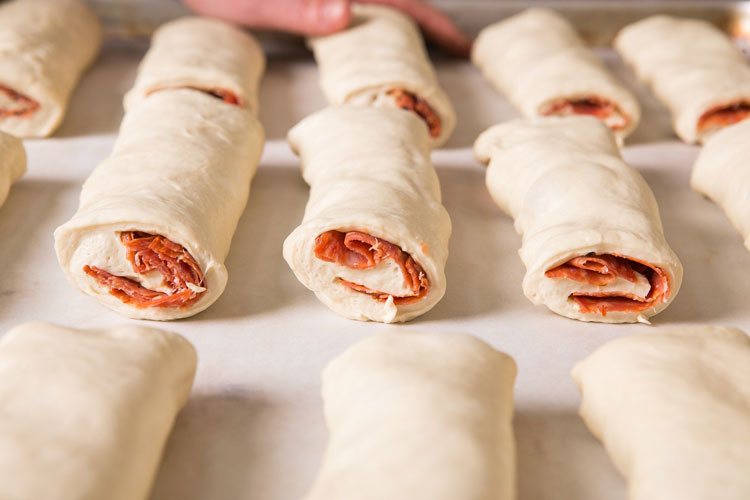 In addition to crafting pepperoni rolls that any descendant of Calabrian immigrants would be proud to call their own, Schuler’s sociological mission is what makes these rolls even more interesting. Although Appalachia loosely is defined by its geography — the mountainous landscape that weaves as far south as Alabama and as far north at New York — its identity largely is self-defined by the people who claim it. To illustrate the point, Schuler is sharing stories and reflections about Appalachia on Rolling Pepperoni packaging and on its website. She says she is changing the packaging every two weeks, with the eventual aim to add a new story weekly. “We’re trying to give people the opportunity to talk about what Appalachian culture means to them,” she says.

The reflections begin with a prompt: “What is Appalachia to you?” There isn’t a single straightforward answer, but Schuler says she’s starting to notice variations on a theme. 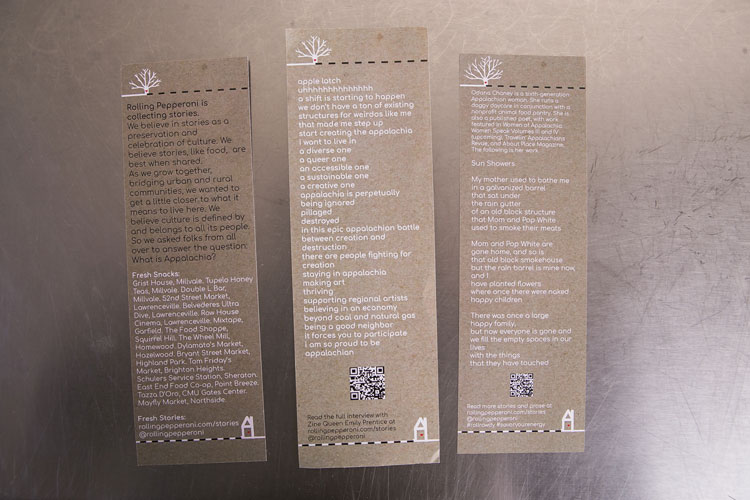 “In general, people talk first about the region geographically. Then they talk about how pissed off they are that the resources and people have been exploited. And then they come back to how much they love the region, they love their home, all the beauty in it,” Schuler says.

Schuler hopes that having people share their reflections will foster a dialogue that could lead to a better understanding between people from rural, red state West Virginia and the more progressive city of Pittsburgh. “The benefits of the exploitation of Appalachian resources live on in the cities through foundations, public works, libraries. But it didn’t extend to rural communities,” she says.

If that conversation begins by breaking bread with one of the tasty versions of West Virginia’s iconic food to be found between Pittsburgh and Elkins, all the better. “We are Appalachian here [in Pittsburgh], too. We’re in it. So let’s bridge the divide. It makes perfect sense to use the pepperoni roll as a point of connection. It’s delicious,” Schuler says. 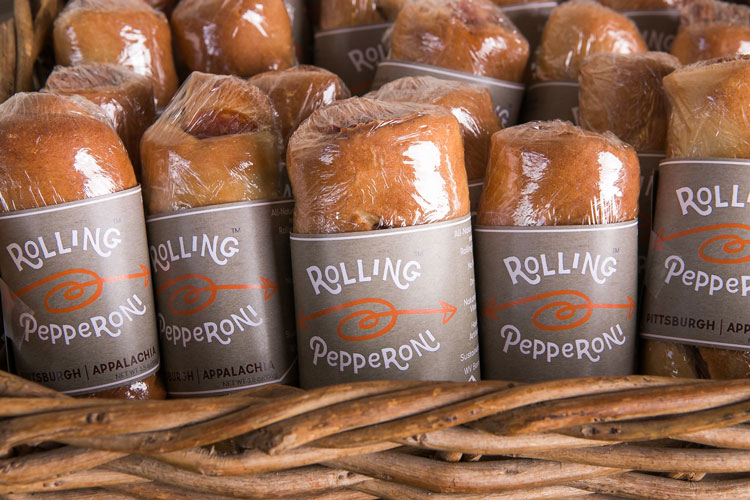