Robotic Surgery Gets Farmer Back in His Field 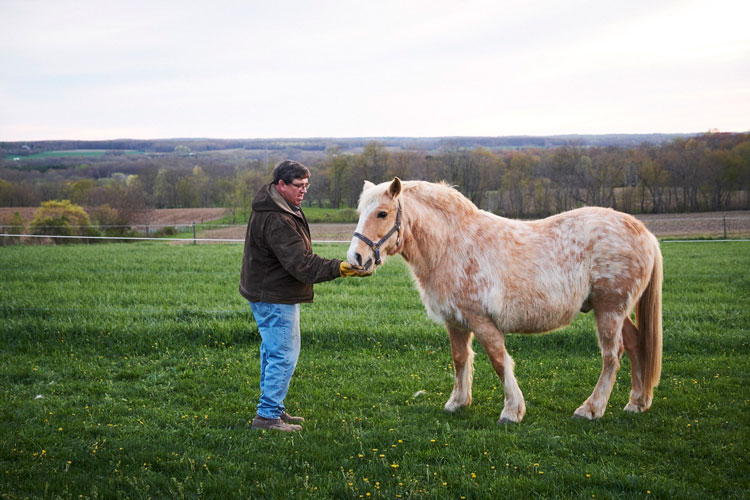 Dan very rarely lets illness slow him down. As a farmer, a business owner, and a champion wrestler, he’s the kind of guy who works through his pain. But when his legs went numb and he could barely walk, he knew it was time to see a doctor. Thanks to a minimally invasive spinal surgery using Mazor X™ robotic technology, he was able to return to his farm in time to plant the spring crops. Dan is living proof that new, precise technologies are helping people keep pace with their lives.

Dan has always been hard on his body. He grew up working on the farm that he now owns. The farm has been in his family for five generations.

Sports have also been a big part of his life. As a collegiate wrestler, he was a National Runner-Up and National Champion. At 57, he has enjoyed being involved with the wrestling team at a nearby high school. As a volunteer assistant coach, he would still get down on the mat to spar with an opponent.

When the pain began to limit his activity, it was difficult for Dan. “I was walking hunched over,” he said.

Going the distance for relief
A friend recommended he see a neurologist. When he asked around for referrals, one name kept coming up — Dr. Whiting. Donald Whiting, MD, is a neurosurgeon and chair of the Allegheny Health Network (AHN) Neuroscience Institute at Allegheny General Hospital (AGH).

Dan drove an hour and a half from his home near Sharon, PA, for Dr. Whiting’s advice. “I felt comfortable talking with him,” Dan said. “He knew what he was doing.”

Dr. Whiting told Dan he had spinal stenosis and mechanical spinal instability. “He caught that I had bone on bone in my L5-S1 joint that was causing the irritation,” Dan added. “In addition, I had a slipped disc between L5 and L4.”

Dr. Whiting knew Dan was anxious to return to work. He recommended Dan consider Mazor X™ minimally invasive surgery. Mazor X™ is a sophisticated new technology for spinal fusion. Surgeons at AHN were the first in Pennsylvania to use the surgical technology.

Dan was relieved to hear about an option that would help him recover in time to plant his fields of corn and soybeans. “Recovery time is quicker compared to those who go through traditional surgery,” he said. “A quicker turnaround time was definitely better.”

“Dr. Whiting inserted two replacement discs in my spine, he cleaned out my stenosis, and placed two rods and six screws in my spine,” said Dan.

Pioneering a new option for patients in Pennsylvania
Mazor X™ is unique because it uses a 3-D imaging system to view the bones of the spine before surgery. This helps surgeons plan precisely for implant and instrument positioning before the surgery and eliminates the need for additional preoperative testing.

The Mazor X™ robot is mounted directly to the patient’s bed and uses 3-D modeling to improve accuracy. With the surgeons in full control, the Medtronic O-arm® guides the tools and implants according to the surgical plan.

Minimally invasive surgery is typically performed through small incisions, and surgeons use microscopes and endoscopes to view the spinal structures on a 3-D monitor. Mazor X™ gives them accurate visual guides through real-time imaging that lets them see inside the body as surgery is underway.

In addition, the surgical arm extends the surgeons’ reach, allowing them to approach the spine from a variety of directions, for increased surgical options.

According to Dr. Whiting, spinal fusion has traditionally been done using an open technique. Because this requires a large incision, patients are at risk for increased blood loss, longer hospital stays, and more severe scarring.

After a healing period of about three weeks followed by three months of rehabilitation, Dan is back to his active life. He is able to climb onto his tractor, operate his chainsaw, and carry 50-pound seed bags. “I’m standing up straight, now,” he said. “Before the surgery, I couldn’t walk more than a quarter-mile without sitting down.”

Dan has no plans to slow down any time soon. He wants to be like his dad, who still works on the farm at 86.

“I am happy to say I am feeling stronger every day thanks to Dr. Whiting, the AGH staff, and the Mazor X™ robot,” said Dan. He also appreciates his local physical therapists who have contributed to his speedy recovery.

This article appears in the August 2017 issue of Pittsburgh Magazine.