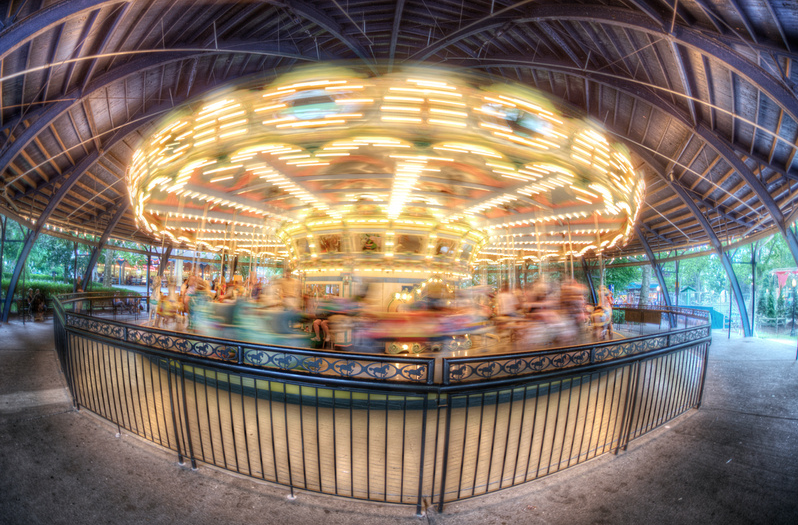 RIBS, HALUSKI POTATO SALAD AND ZOMBIES
Now in its 12th year, Kennywood’s Phantom Fright Nights has become a yearly tradition for many ’Burghers. Spookhouse aficionados come for the lineup of haunted attractions, including BioFear, Voodoo Bayou and Villa of the Vampires, woven around (and sometimes through) park rides and landmarks. Thrill-ride fans, meanwhile, know that Phantom Fright Nights offer their only chance to ride Kennywood’s iconic roller coasters in darkness, as the park’s regular lights are turned off for the Halloween season. Still more locals go because it’s the last chance to eat Potato Patch before winter.

If you’re a diehard looking to further your Fright Nights experience, though, you can get your tickets for the one-night-only “Pre-Scare Dinner” this Friday. At 5:45, you’ll be offered a feast including “Succulent Rat Ribs” (barbecue baby-back ribs), “Haunted Bell Tower Squab” (oven-fried chicken), haluski potato salad and much more. You’ll also get some face time with the park’s ghouls — photo op! — and early admission to the Villa of the Vampires. It’s the perfect combination of food and fear.

WHAT LURKS IN THE BASEMENT?
Speaking of haunts, Etna’s ScareHouse is back and improved for 2013 with a longer and more terrifying series of haunted attractions. The new addition to the landmark haunt is only for the very, very dedicated. The Basement is less a haunted house and more a very, very intense piece of interactive theater where you’re the main character — and a great number of people want to do very bad things for you. After Dark received an early look at The Basement and (barely) lived to tell the tale. Get a full (spoiler-free) report in this week’s edition of After Dark!

ROW, ROW, ROW YOUR BOATS
Everybody knows about the Three Rivers Regatta, with its speedboats, Sea-Doos and high-flying aquabatics. In stark contrast, the Head of the Ohio River is a shorter, quieter event, yet it’s no less formidable. This Saturday’s event showcases rowers and shells, courtesy of the Three Rivers Rowing Association. You’ll find every level of competitive rower, from juniors to Olympians, plus student-athletes from 75 colleges. These folks replace engines and horsepower with superhuman upper-body strength. Head of the Ohio may be brief, but it purports to be one of the nation’s biggest one-day regattas.

IN THEATERS: New films coming to Pittsburgh theaters this weekend include: the crime drama Runner, Runner, with Justin Timberlake and Ben Affleck; Sandra Bullock and George Clooney in the space horror epic Gravity; and acclaimed Afghan drama The Patience Stone. PM Film Editor Sean Collier will appear on the 102.5 WDVE Morning Show Friday at 9:45 a.m. to review Gravity. He doesn’t want to tip his hand, but he’s been tossing out sentences with words including “best” and “picture” lately. Tune in to 102.5-FM or DVE.com to hear Sean’s review!

It’s a celebration for your pups — and a chance to find a new pet — as the Coalition to Adopt, Rehome and Match Abandoned Animals presents DogtoberFEST this Saturday at SouthSide Works. Click here for more info — and don’t miss the “Pooch Pride Costume Parade.”

This article appears in the October 2013 issue of PMWeekend.
Categories: Things To Do