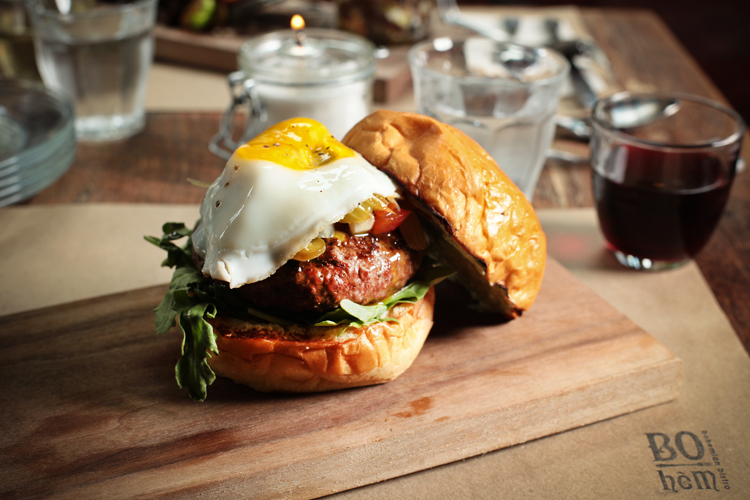 Things are happening in the North Hills. In January, Businessweek named Cranberry Township the “Best Place to Raise Kids” in Pennsylvania — and ranked it 39th in the nation. As for dining options, the area has became known for its abundance of family-friendly chain restaurants.

Restaurant ECHO was among the North Hills’ first independent eateries when it debuted in 2011. Since then, Walnut Grill, Tamari, BRGR, Off the Hook and a few other quality-focused spots have joined the scene. BOhèm Bohemian Bistro got into the mix late this spring, offering small European-style plates, wine and an atmosphere conducive to good conversation.

Markay Harlan dreamed up the concept for this restaurant. As owner of BOhèm and its sister eatery, SiBA Tuscan Grill & Wine Bar next door, Harlan wears many hats: Besides being a restaurateur, she’s also a lawyer, real-estate developer and artist.

“I lived and traveled in Europe and wanted to recreate one of those fun, out-of-the way places where you have a relaxed, informal atmosphere that is sort of artsy and unconventional,” she says.

Harlan’s artistic savvy is visible at BOhèm. Designed with the help of Parisian restaurateur Phillipe Beltran, a friend of Harlan’s, the spot has striking, eclectic furnishings. The rustic stone-walled interior contains all sorts of recycled materials, including metal chandeliers, wooden beams, colored wine bottles and even wire chicken cages. The mood is further enhanced by tabletop accents such as brown-paper placemats.

“Scott is awesome and so creative,” says Harlan. “When he designed the menu, we tasted 37 items in one seating during a five-hour period, and each dish was even better than the last.” 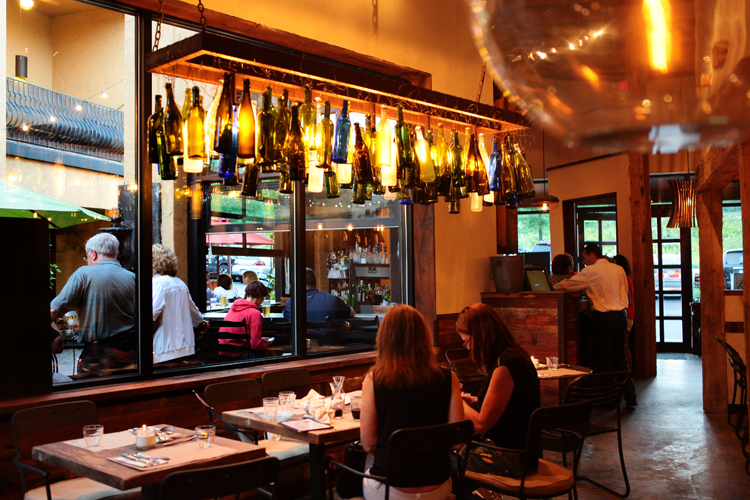 It’s also worth noting that SiBA welcomed a new executive chef when DeLuca started at BOhèm. Chef Frank Tokach previously worked in the Nordstrom Café kitchen and, before that, at the Pittsburgh Athletic Association. The pair has developed a collaborative relationship.

BOhèm offers a menu of shareable items: appetizers and charcuterie; soups and salads; tartines, crêpes and flatbreads; and bistro classics. All of the food is well-presented and exhibits a focus on detail. Some dishes are bland or lack a punch; others are quite flavorful.

A good choice: the crispy Brussels sprouts ($9.50). Sprouts are roasted with pancetta, Parmesan and a sweet balsamic-wine reduction glaze, making this dish more of a treat. The charcuterie board ($16.50), previously offered, had a nice selection of meats, such as a homemade country terrine with all the fixings — Dijon mustards included. The mussels with Andouille sausage, white wine and garlic butter ($9) are the right kind of spicy. Less to my liking is the Gorgonzola and pear mousse ($7), which is too mild.

The superb beet salad ($7), with thinly sliced beets, pea shoots, chèvre and red onion, has been removed from the menu since my visit. Skip the unremarkable “daily bread” ($2.50), sliced baguette from BreadWorks. Also disappointing was the croque madame ($14) because that version of the dish — a layering of bread, Gruyère, ham and soft-boiled egg — wasn't better than the original concept.

The “bistro classics” are entrée-sized and range in price from $14 to $19.50; nothing on the menu tops $20. The BOhèm burger, which can be topped with an egg (for $3 more), is made of high-quality meat and was formerly served on a brioche bun with herbed cheese spread. Chef DeLuca and I have the same favorite dish — the “crispy skin” duck confit, available as an entrée ($19). The duck is prepared via the classic method of preserving it in its own fat and finishing in the oven; the result is meat that is fall-off-the-bone tender with a rich mouthfeel. 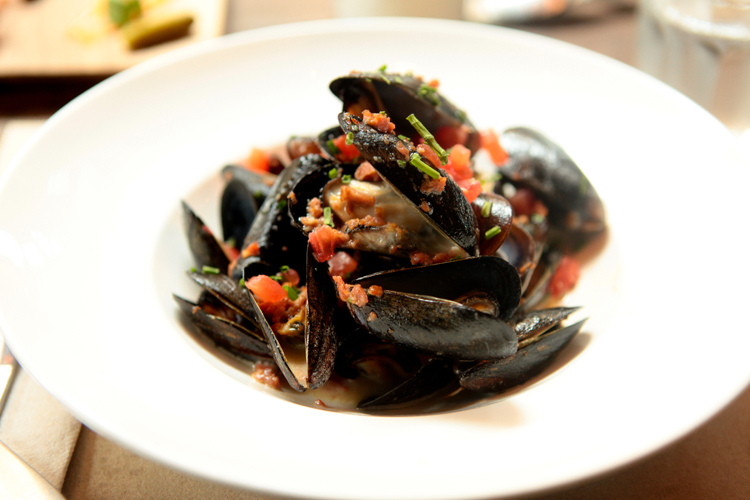 In general, the desserts were average. Two standouts are the rustic blueberry tart and gluten-free chocolate whiskey cake ($6 each).

BOhèm’s wine program is in line with its goal of providing an environment that favors sharing. There are about 30 kinds by the glass, as well as some available by the quartino and litre. Wines are broken up by price point, ranging from “friendly” (starting at $30 per bottle) to “alluring” (prices begin at $50 per bottle). BOhèm also offers a full bar and liquor program. Live music on the terrace complements the relaxed vibe.

A nice touch: BOhèm has reinterpreted the Parisian tradition of attaching a padlock to a bridge. As part of its “Locked in Love” program, patrons display locks on a fence at the eatery. If you buy a padlock, the cost of your purchase will be donated to the Pittsburgh Project, a nonprofit that develops after-school programs for inner-city youth. 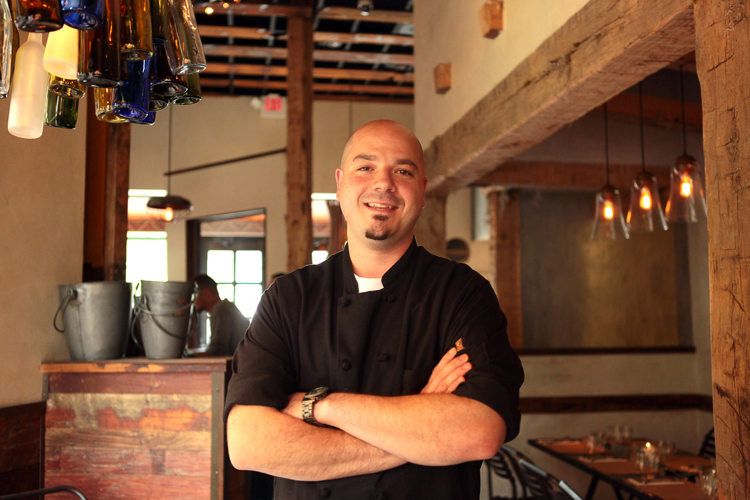 How did you get your start?
When I was 13, my sister worked in a restaurant, and I started working there as a dishwasher. One day I told them, “I’m not coming back unless I can cook.” So I was on the line cooking by the time I was 14. That restaurant was in West Virginia, south of Morgantown, and we did a huge volume of food for skiers and tourists.

What’s your fine-dining experience?
I went to work for Fossett’s at the Keswick in Charlottesville, Va., where we did high-end, multicourse tasting menus. It was there that I really learned how to plate and how to mix and match flavors. It [amazed me that] it was [harder] to please 89 people at the Keswick than 400 a night at the restaurant where I got my start; the standards were so high. One time, I slightly burned the edge of a shrimp-and-grits soufflé, and the head chef took it off the plate and threw it at me! I never burned another thing after that.

Why did you relocate to Pittsburgh?
I came here [to study] at the [former] Pennsylvania Institute of Culinary Arts. Then I moved back here again to be closer to my family. I was the executive sous chef [and executive chef] at the Pittsburgh Athletic Association.

What are your hopes for this restaurant?
I really want people to expand their palates.  I want the menu to be a mix of things you might consider “safe” [along with] more challenging things, such as the escargot and the homemade liver paté. But, in every case, the focus is on the freshest ingredients and preparation.

Why do you want people to try new foods?
I want everyone to try new foods no matter what their preconceptions. There are many foods that I used to hate when I was younger. When you finally eat that same food when it is high-quality and well-prepared, you feel like, “Wow!” That’s a great experience I would like everyone to have.

This article appears in the October 2013 issue of Pittsburgh Magazine.
Categories: From the Magazine, Hot Reads