Casa Rasta adds to the Mexi-fare frenzy, Sinful Sweets puts chocolate on everything in Lawrenceville and much more. 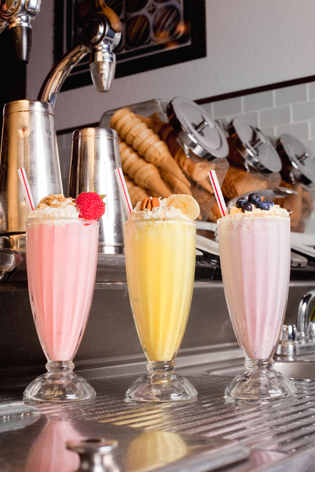 Shake It Up
<< The local experts at The Milk Shake Factory are introducing several brunch-inspired flavors, like Strawberry Parfait, Banana-Nut Muffin and Blueberry Pancake. The new Milkshake Brunch menu, which launches on Mother’s Day (perfect!), will be offered every Sunday through Labor Day from 11 a.m. ’til 2 p.m. The shop’s 55 other divine flavors will also be available. Shirts, shoes and straws required.

Casa Rasta
It’s clear that 2011 was the year of the burger. With the way things are going, tacos appear to be an increasingly strong staple in 2012 (if you’re one of many Smoke bbq taquiera or Reyna’s devotees, you’ll agree). Adding to the local Mexi-fare frenzy is Casa Rasta, maintained by married duo Laura and Antonio Fraga. This tiny BYOB eatery’s popularity has peaked, thanks to word of mouth; be sure to try at least one of the delicious tacos (since Antonio’s a native of Mexico, he knows his stuff) — such as the Jamaican jerk chicken, which displays the shop’s Caribbean influences. These eats are pretty darn cheap, so come hungry and enjoy your meal on the patio.

Sinful Sweets
As a child, Christopher Weck (like many kids) enjoyed visiting his local candy store — and when his uncle opened a chocolate factory, his love for candy grew even more. Fast-forward several decades, and you’ll see that zeal in Weck’s creations at Sinful Sweets. Offering high-quality, hand-dipped candies, Weck is the sole operator of the charming shop. His treats — including carrot lolli cakes, bacon-chocolate bars and Nutella pretzels — wow guests at weddings, parties and showers. The secret ingredient in Weck’s goodies is undoubtedly passion.

Yinzburgh BBQ
Here in Pittsburgh, we have a few go-to spots for real-deal barbecue fare. But we were always on the hunt for more … at least until this place came along. Owned by Richard Coursey, Yinzburgh is set up in a small, plain shop — but the obvious draw is Coursey’s Southern grub. After receiving a brief tutorial about the house-smoked meats and signature sauces, patrons can pick pulled pork, ribs, brisket, chicken or even tofu dishes; the menu is split into various sections, including combos and “sanwiches.” And Coursey’s list of sides, which includes comfort-food favorites like mac n’ cheese and collard greens, will leave you wanting more.

Sincerely Yogurt
This local yogurt chain has expanded its operations, just in time for warm weather. Now operating five sites, Sincerely Yogurt is looking to get its low- and nonfat frozen yogurt in the hands of as many people as possible. The self-serve shop offers such flavors as green tea and pomegranate — all of which can be topped with fresh fruit (and other goodies) or become part of an incredibly delicious smoothie. And for the truly dedicated, Sincerely Yogurt’s Flavor of the Day iPhone app lets you know which location has your desired variety on the menu.

This article appears in the May 2012 issue of Pittsburgh Magazine.
Categories: Eat + Drink Features